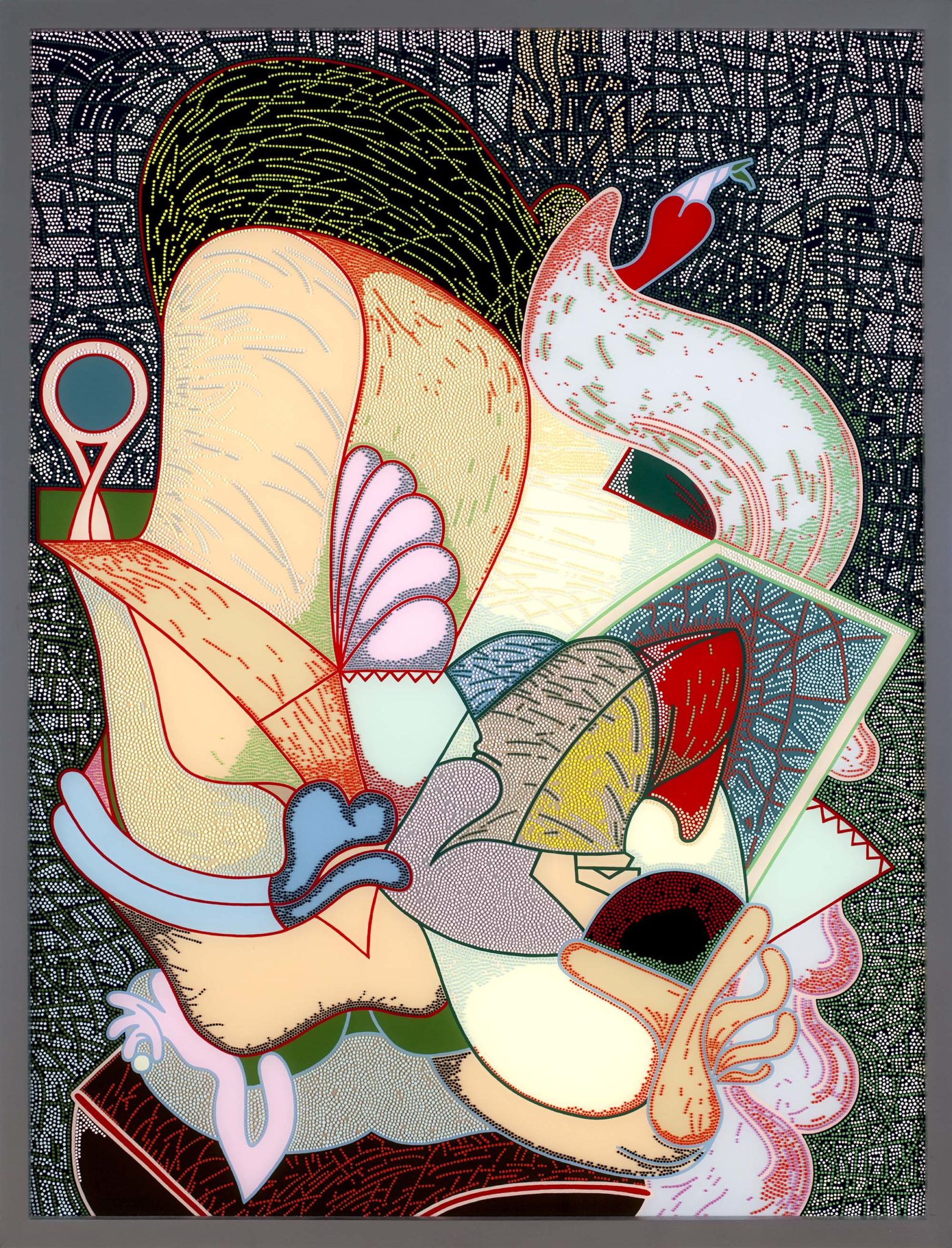 In Barbara Rossi’s 1974 painting on Plexiglas Eye Deal, a mass of globular forms appears to emerge upwards from beyond the bottom of the picture plane. Surreal, amorphous shapes twist and wind in an otherworldly configuration that is both figurative and abstract. Pale yellows, milky greens, light blues, and soft lavenders dominate, with bold punctuations of red, blue, and green. Ornamenting the surface are countless tiny dots, arranged in clusters and applied with such precision as to trick the eye from a distance into seeing flat areas of color; the technique recalls Australian aboriginal dot painting and the pointillist style of Neo-Impressionism. Rossi has strategically deployed these dots throughout the painting to create the illusion of depth. They swarm in bands and contour shapes—implying shadow and overlap—and form short, arcing lines that resemble creases in garments or folds of skin. Familiar shapes anchor the composition and provide a rhythmic loop for the viewer’s eye: a tongue, a quizzing glass, a small hand, and the curvilinear ridges of a clam shell stand out among other elements. Tightly hugging this peculiar composite is the equally complex negative space, fashioned out of dots of paint applied in an irregular, grid-like pattern against a midnight-blue background. These stippled fields form an organic patchwork that seems to buzz with electricity, recalling nighttime satellite imagery of glowing cityscapes.

Enhancing this optical effect are the minute shadows—visible through the Plexiglas—cast by each mark. In the early 1970s, Rossi began to create her signature “reverse paintings,” in which the artist applied flat acrylic paint to the back of a transparent panel of Plexiglas (the ubiquitous industry name for the generic plastic sheeting, like Kleenex to tissue). The first layer of color laid down is what is seen on the reverse, front-facing side, leaving no room for overpainting or revisions. Although her contemporaries also employed the reverse painting method, Rossi’s approach was unique in that she combined the medium with her precise pointillism, resulting in a sense of movement, vivacity, and depth—qualities that belie the true flatness of the surface and prompt closer examination. To guide her brushwork—which had to be exact—Rossi would create preparatory sketches and lay the final planning image underneath the Plexiglas as a kind of blueprint. The 1973 lithograph with chine-collé shares the same title and may have been used as a guide for the 1974 work. The soft white of paper, chiaroscuro modeling, and delicate suminagashi marbling make this work stand in sharp contrast to the explosive polychromatic painting. Still, it is complex and dimensional.

Rossi admires art that holds the viewer’s attention; in particular, she is inspired by Indian miniature painting by Mughal-era artists, whose intricate designs and atmospheric treatment of space invite the viewer to slow down and spend time with the work. In Rossi’s words, “[they are] a special kind of image that lets you know how much there is in the world.”

Barbara Rossi was born in Chicago in 1940. She earned her master’s degree in painting from the School of the Art Institute of Chicago (SAIC) in 1970, and joined as professor a year later. Rossi’s paintings, prints, and drawings combine surreal, cartoonish figuration with high craftsmanship. In graduate school, she became known for her meticulously drawn graphite and colored pencil renderings of abstracted body parts and irregular forms. Early on, she established a personal rule of never revising her work, and embraced a binary of “magic works” and “sweat works”: the former referring to her unplanned, subconscious drawings, and the latter describing her reverse Plexiglas paintings, which required a careful and practiced hand. As a student, she found inspiration in a range of artistic movements and vernacular traditions, and developed what would become a lifelong interest in Indian miniature painting. She admired the exquisite brushwork and scenes-within-scenes of Mughal miniatures, and was moved to employ these devices in her own work. Rossi continued to explore her scholarly interests after graduate school and made several trips to India. She took a brief hiatus from painting and teaching to organize a traveling exhibition of Indian miniatures and authored a book on the subject, entitled From the Ocean of Painting: India’s Popular Paintings, 1589 to the Present (1998, Oxford University Press).

Rossi was introduced to the Chicago Imagists through her participation in the 1968 Exhibition by Artists of Chicago and Vicinity, an annual showcase of new art from the area. Rossi reflected, “My work was up next to Ray Yoshida and Suellen Rocca, and one person away from us was Gladys Nilsson… And I looked at the work and I thought, ‘Oh! I would like to know these people!’” To Rossi’s delight, fellow Chicagoan Don Baum invited her to participate in the Marriage Chicago Style exhibition at the Hyde Park Art Center, cementing her social and professional affiliation with the group of artists who later became known as the Chicago Imagists.

Rossi videotaped discussing her first shows with the Imagists

Hyperallergic review on Poor Traits at the New Museum

ArtSlant review on Poor Traits at the New Museum

Image gallery of paintings and drawings in Poor Traits

History and symbolism of the quizzing glass

The art of suminagashi paper marbling