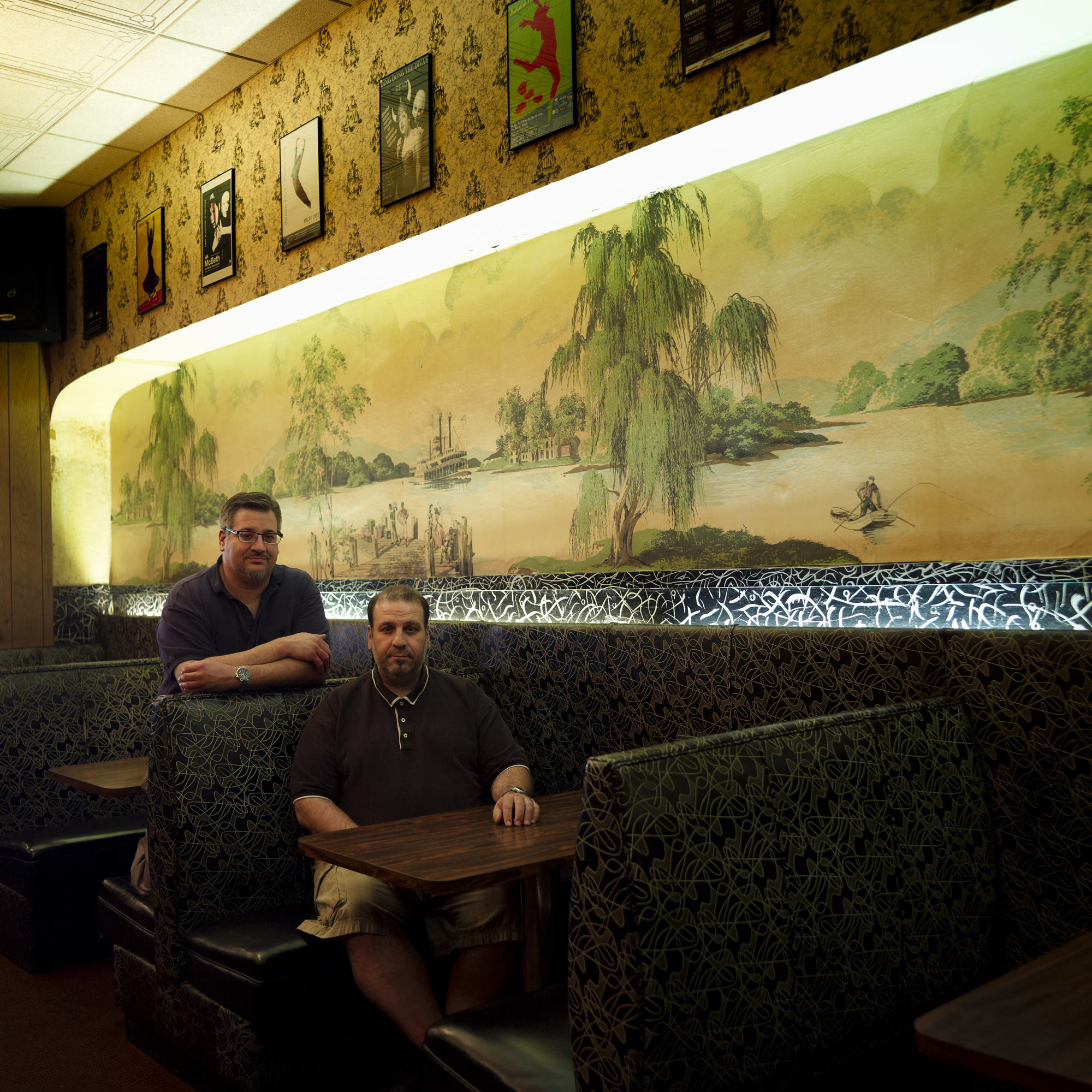 3641 – Tom and Dino Christ – Nick’s Restaurant – Madison, WI from the portfolio For Love and Money

Nick’s Restaurant is a portrait of brothers Dino and Tom Christ in their long-established family restaurant. No customers or restaurant paraphernalia are in evidence, only the two owners. They gaze directly at the spectator from booths along a wall, comfortable in their dark polo shirts and, for Dino, shorts. White trim on collar and sleeves of one of the shirts is echoed in white abstract designs on black painted wood bordering the booths. The lighted wall is papered with a sentimental scene of the historical South, showing black laborers and a white couple in fancy dress waiting for an oncoming steamboat. Large trees in the wallpaper landscape frame and repeat the shapes of the men’s torsos and heads. Intersecting diagonal lines are formed by the edge of the soffit above the wallpaper scene, the backs of the booths, the tabletops, and the ceiling tiles. All these lines direct the viewer’s eye toward the two proprietors, indicating the significance of their positions in the business and, by inference, in the surrounding community. Hints of this community connection are offered by framed posters on the wall above, announcing dance and theater performances at local venues.

Carl Corey’s photograph is a classic portrait, its focal point the faces and expressions of the two men, looking toward the artist. Only their choice of dress conveys information about their preferences or personalities, with no added artifacts or belongings other than wristwatches. The clarity and space devoted to the setting elevate its significance. Corey chose his vantage point to balance the view of the two figures with a clear and detailed perspective of the restaurant, suggesting that their workplace figures centrally in the lives of these two businessmen as well as in the community. In fact, Nick’s Restaurant has been a fixture in downtown Madison for fifty-five years. The image is part of Corey’s portfolio For Love and Money, which consists of portraits of Wisconsin family-owned business employees and owners.

Carl Corey is known for commemorating aspects of Wisconsin’s cultural identity through fine art photography. His photographs of bars and restaurants were published in a 2011 book by the Wisconsin Historical Society Press entitled Wisconsin Tavern League. The photographs in Wisconsin Tavern League typify Corey’s larger body of work, which focuses on Midwestern life and culture. Nick’s Restaurant reflects the genre of “on the road” photography—a style in which photographers embark on an American road trip and document the people and places of their adventures. Corey has cited two influential “on the road” photographers, Robert Frank and Stephen Shore, as influential for him. The photographs of Frank and Shore similarly focus on ordinary people in compelling environments, and Shore pioneered the use of color in photography. Corey recently compiled a photo journal, Along the Yellowstone Trail, after walking the 480-mile Wisconsin segment of the Yellowstone Trail, a cross-country tourism route established in 1913 that once connected Plymouth Rock in the east to Puget Sound in the west.

Corey grew up in Chicago, and strong memories of his family’s road trips influence his work. He has said, “I always remember the special feelings those road trips gave me. The opportunity to explore, see new places, meet people, and make friends. The wonder at what’s around the next corner, of where will this road take us? As I matured I realized some of those trips were closer to home than my memory had made them, but they were still full of excitement and anticipation.” Corey has said that his decision to become a photographer evolved from his desire to experience again the emotions, particularly curiosity, that he felt when traveling with his parents in their 1959 Chevrolet Impala. He creates his photographs to satisfy his curiosity about the surrounding society and its historical and cultural aspects. For Corey, the medium of photography most successfully allows one “to capture life, document the landscape, and share a vision.”

Corey began his college studies at Northern Illinois University and earned his Bachelor of Fine Arts degree at Southern Illinois University in 1976. He uses a Hasselblad single reflex camera with a digital back (that is, a device that attaches to the back of the camera containing a digital sensor to capture the image). He processes his pictures digitally and prints his images using large-format Epson printers and pigment inks on rag paper. He chooses not to alter his pictures in any manner other than what he can do in a darkroom. He does not title his images because he refuses to assign meaning onto his photographs. Instead, he gives them each a number in the order that he shoots the pictures. 3641 – Tom and Dino Christ – Nick’s Restaurant – Madison, WI is the three-thousand forty-first photograph Corey has archived into his body of work.

Interview with the artist on the portfolio, For Love and Money

Along the Yellowstone Trail

The Open Road: Photography and the American Road Trip