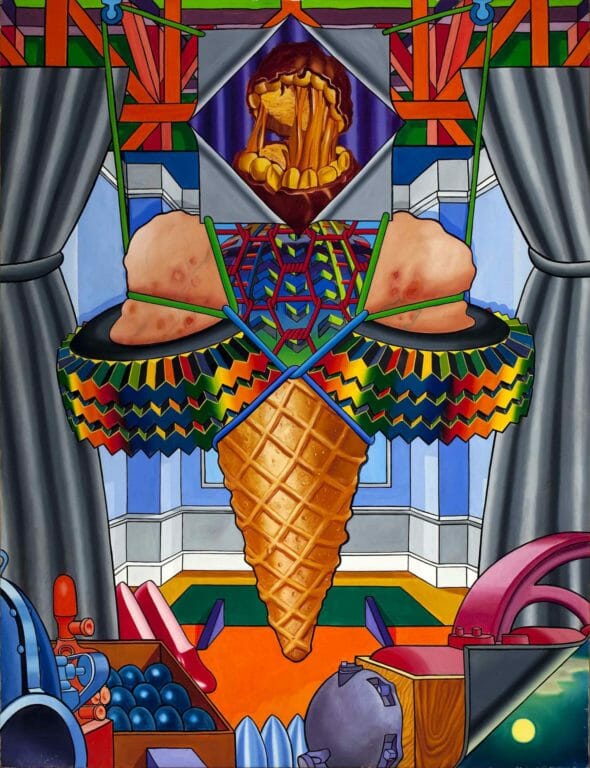 Regulatory Body presents a vibrant scene of brightly painted objects both familiar and puzzling. Red shoes, blue cannonballs, shiny gray missile heads, and peculiar machine parts are among the many items densely packed into a setting resembling a theater stage, where some of the objects function as an audience. Appearing to dance onto the stage, the star is a mysterious figure whose lower portion is formed from a waffle ice cream cone. This character hangs from a green cord threaded through pulleys to rafters above. Surrounding its midsection and composing its spinal column are rainbow-colored vehicle tires that border bulbous shoulders, like ruffled flounces. The flesh-colored shoulders, where the ice cream should be, are covered with veins and sores. Inside a geometric head is a huge open mouth formed from the caramel and peanuts of a candy bar.

The setting for this spectacle is a shallow architectural space flanked by free-standing curtains, like steel pillars. Behind and above this “set” is the scaffolding of a theater backstage. All of the scene simultaneously and mysteriously occupies the same flattened space, making the illusion of depth confusing; even more baffling, in a trompe l’oeil gesture, the lower right corner of the image has been “peeled back” to reveal a romanticized image of moon and cloud. Its pretense of depth is countered by the suggestion that this little view has been hidden by a sticky decal.

Regulatory Body’s strong lines, quirky shapes, and saturated hues are reminiscent of images in comic books. Its title seems to be a sly joke about government agencies that generate rules, particularly ones involved in amassing and dispensing war materials. Ruby slippers like ones Dorothy wore in the Land of Oz are a big hint that a lot of staging and illusion-making are devised by the wizardry of regulatory bodies.

Art Green is known for his colorful paintings that start with a single image—something symbolic of an aspect of life—and then are built up with multiple layers into scenes that are both familiar and enigmatic. He has said that he wants his paintings to “hit you in the eyes.” His compositions are typically flat and, though layered, subvert notions of illusionary depth. He believes that objects have psychological importance and that “to see things in an extraordinary way you have to forget what you are seeing.” He wants his works to imply a mystery. On Green’s studio wall hang colorful ads and posters of pop culture icons, including a giant chocolate-dipped ice cream cone, Firestone brand tires, a red and white popcorn box, and a picture of Elvis Presley. He has said he tries to capture in his paintings the feelings he had one day in sixth grade when walking home from school contemplating why he was “me and not, let’s say, a squirrel, and where did this ‘I’ come from and where was ‘I’ before I was born?” These thoughts made the “seemingly arbitrary fullness” of the world seem strange. While he relishes intense color, Green has said he tries to avoid using too much green in his work “to avoid the inevitable pun” on his name.

Green studied industrial design at the School of the Art Institute of Chicago before earning his bachelor’s degree at SAIC in 1965 in painting and drawing. He was inspired by Chicago architecture, blues music, and theatrical and constructed spaces. He especially liked the surrealist art of Georgio de Chirico for its appearance of emptiness in the world, and of René Magritte, for its juxtapositions of unrelated objects, since he thought they might have had some of the same feelings and perspectives on the world he experienced as a sixth-grader. His father was a bridge engineer and his mother made quilts using drawersful of colorful fabric. Green hung out at book stores, junk stores, and libraries, and has cited them as good sources for ideas. He taught art in both a Chicago public school and in colleges. In 1976 he moved to Stratford, Ontario, to teach at the University of Waterloo, from which he retired as emeritus professor in 2006.