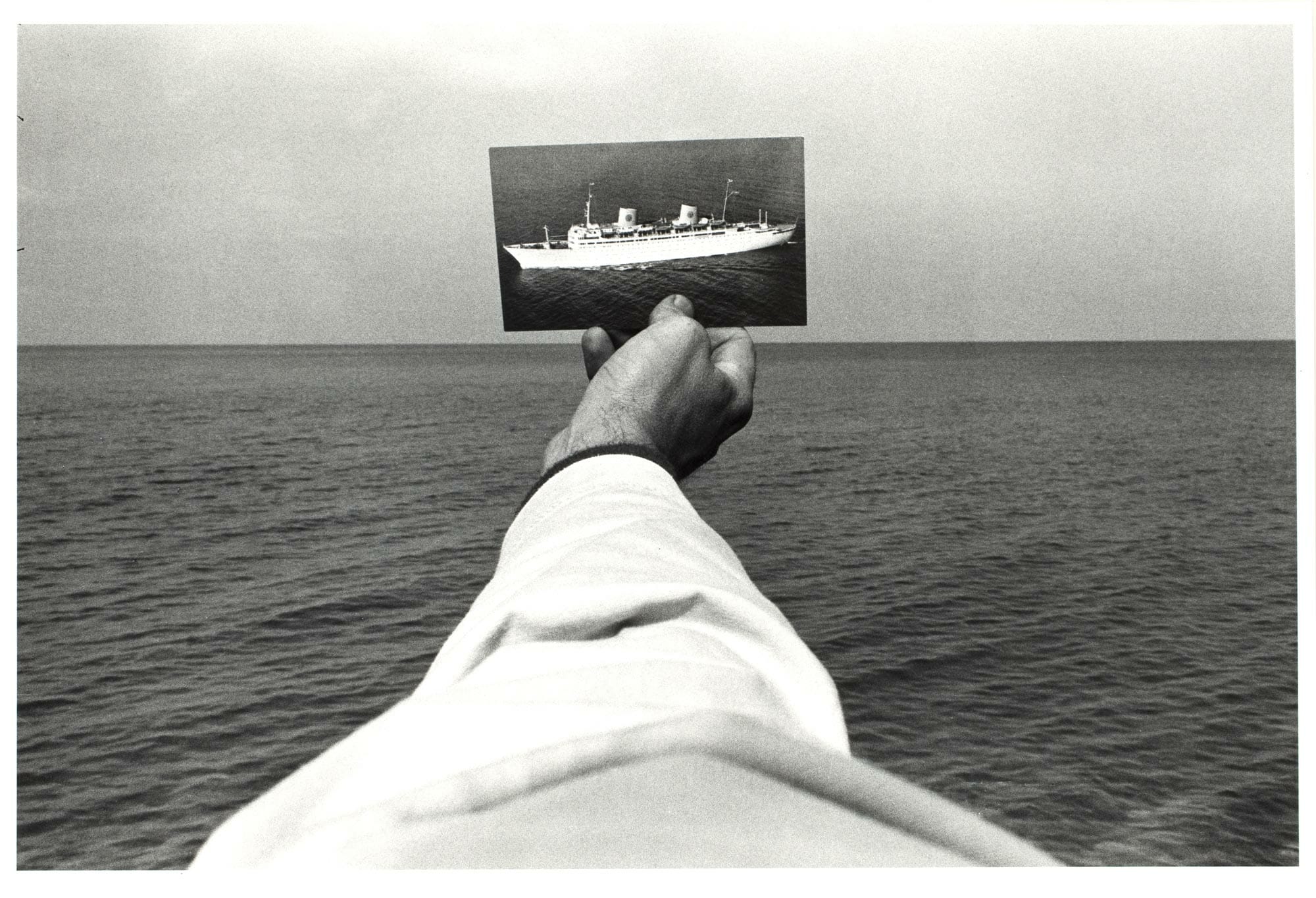 Photographs are generally assumed to be depictions of the real world, especially if their content is made up of familiar objects in recognizable relationship with each other. New York State, 1970 seems to be an amusing portrayal of “reality,” since a real arm is holding a picture of a real boat against the horizon line in a position mimicking the place a ship would really float. The arm stretched over water calls forth confidence that an actual person is reaching over a railing on the edge of land or on a boat. Black, white, and gray color values and the rectangular shape of the images are elements that tap into viewers’ familiarity with photographs. However, familiar photographic cues such as point of view, originating in and extending from the eye of the artist, depth of field, or distance between the nearest and farthest objects, and framing, or positioning the viewfinder to snap an image, are confounded by ambiguity. It is difficult to be certain who is taking this picture and how and where, and whether the “real” objects—arm and photo and expanse of water—are true to what is expected of the “real world.” Even the title is ambiguous and doesn’t reveal the meaning of the image.

This photograph of a photograph held in space causes the viewer to question assumptions about truthful representation according to size and scale; it also draws attention to the principle that photographic reality is constructed through an artist’s ideas and choices. The subject of the photograph is photography itself, and the ways that life is documented, manipulated, trivialized, and celebrated with photographs. Kenneth Josephson found a snapshot of a ship that had been taken by an anonymous photographer and used for a postcard, and he employed it to convey his conviction that what is being viewed is not as important as engaging with the ideas behind it. The “reality” New York State, 1970 depicts is the reality he created with the choices he made, similar to the choices that artists make for other kinds of art—subject, materials, composition, and emphasis.

Kenneth Josephson began taking photographs and developing them in a basement darkroom when he was twelve years old. After high school in Detroit, Michigan, he worked at General Motors Corporation as a messenger for the factory’s photography lab and then enrolled in the photography program at Rochester Institute of Technology. He was drafted into the Army and worked in an Army photo lab in Germany, printing Air Force photographers’ aerial views for mapping and intelligence. He later earned a Master of Science degree from the Institute of Design in Chicago in 1960 and became the first full-time instructor of photography at the School of the Art Institute of Chicago. His work evolved from an early interest in multiple image photography to his mature, conceptual works in which the idea is more important than the visual experience. The ideas Josephson explores are usually explored with a dose of wit, and he cites the absurdity of British comedian Peter Sellers as an inspiration.

Metropolitan Museum of Art, Truth and Illusion in Photography