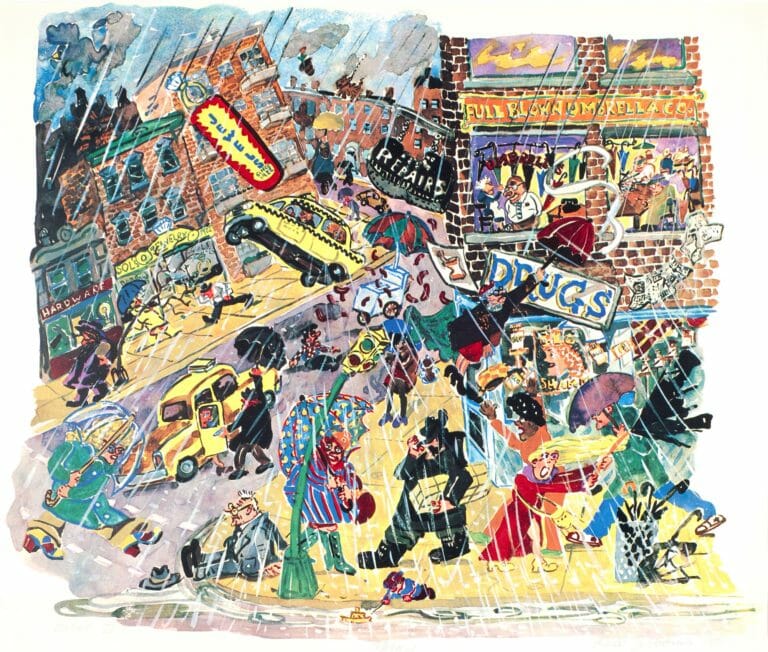 Using their schema of urban life and observing a painting of a city scene, can students better understand the complexities of urban living?

Students will make careful observations and make inferences about the people in the painting based on their prior knowledge of living in a large city. Students will write a short story with dialogue the people could be saying before and/or after the illustrated action/event and share it with classmates. Students will use adjectives and adverbs to describe the actions in the picture. Students will listen and make predictions of who the story is about.

Students will observe the actions in the painting, Blewy II, and write a short story with dialogue for the people in the city scene.

Tell students that we are going to be using a work of art by Red Grooms to help us understand what it would be like to live in a big city on a rainy day. They will need to make careful observations of the people in the painting and think about what it would be like to be one of those people. Then they will write a short story including dialogue for what that person could be saying or thinking before and after the action/event in the painting has happened.

Before seeing the painting:

What are they doing in the picture? Who are they? How are they feeling about the rainy weather? Are they prepared for the rain? Where are they going to or coming from?

Tell students they’ll have twenty to thirty minutes to write a short story about the person in their part of the painting. They need to include:

Tell them that, when everyone is finished, they will read their short story to the class and see if their classmates can guess who they wrote about.