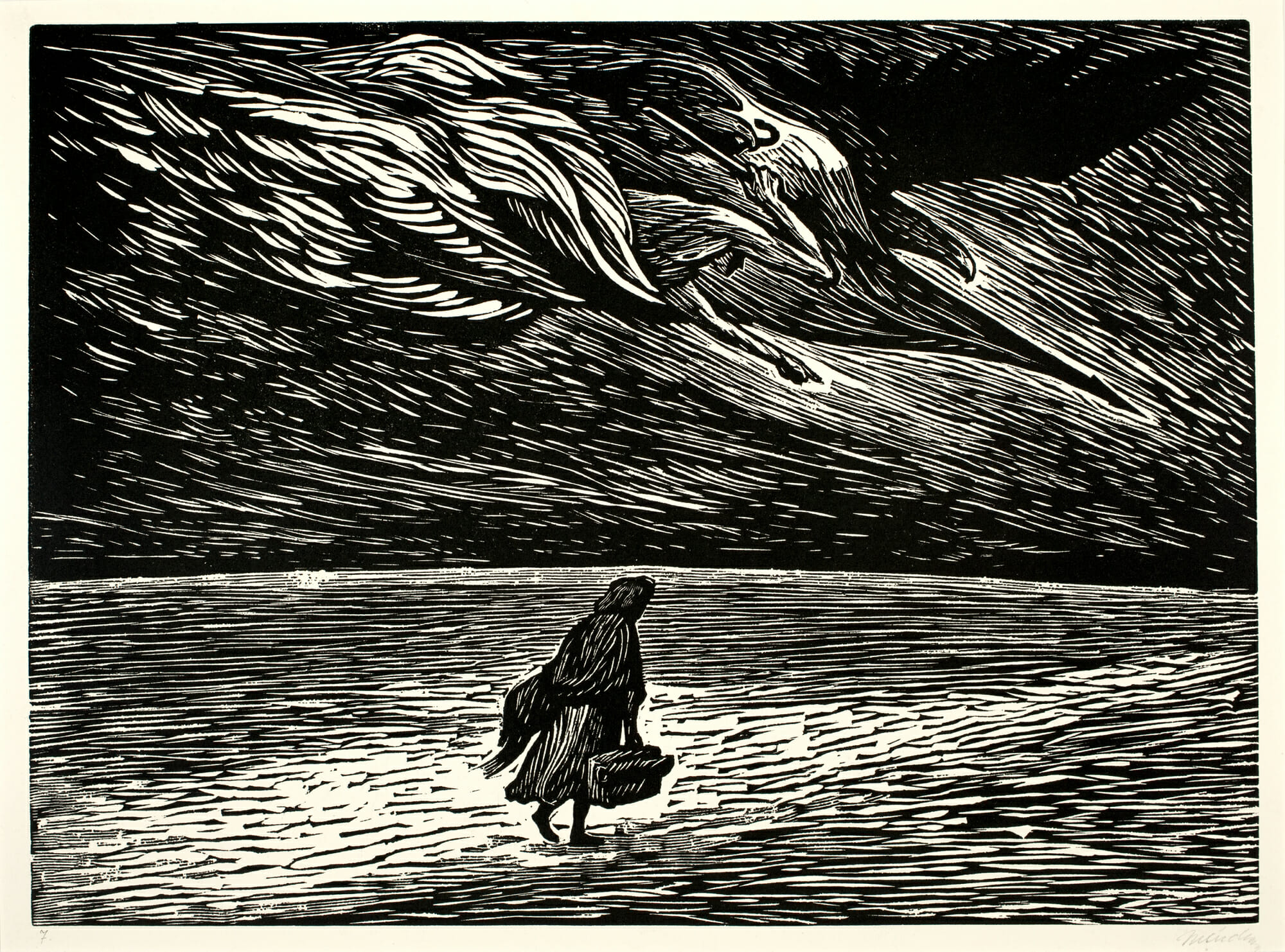 This relief print, created as a backdrop for the opening and closing credits of the 1947 Mexican film Río Escondido, portrays the singular determination of a young school teacher. She walks alone carrying a valise across a stark landscape, appearing diminutive under a sky filled with symbolic shapes that seem to be her guides. The wings of an eagle offer safeguard, and an angel-like figure aims a finger and a flagstaff in the direction she is heading. Another, smaller eagle holds a serpent in its beak, an image familiar to all citizens of Mexico as the central feature of their country’s national flag, symbolizing the founding of the Aztec city of Tenochtitlan (now Mexico City). According to legend, their gods inspired the Aztec people to find an eagle holding a serpent in its beak perched on a cactus in the place they would choose as their homeland. The flag with its central icon has heralded Mexico’s progress toward independence and democratic self-rule since its autonomy from Spain in 1821. In this print, the flag allusion signals the advancement to which the schoolteacher is committed. Themes of resoluteness and tenacity, forward development, educational opportunity, and cultural imperative are all implied.

Méndez cut his image for Río Escondido into a linoleum block, gouging a multitude of short, expressive strokes and then rolling black ink on its surface, leaving the gouged lines free of ink. These resulting white areas appear as reflected light and textures in the landscape. Méndez wanted the original prints that he made for several movies to be like moving murals that could reach more people than murals on public buildings. As described by cinematographer Gabriel Figuero, Méndez would be shown a just-completed film and would interpret the theme in linocut prints for use as backgrounds for the film credits. “Then we would photograph them and put them on the screen. First just the print, without any letters on top, so that the audience could admire it at the size of the screen. It was a totally new possibility, seeing a print enlarged to this size, it was a real mural.” The prints were also sold as individual works of art.

Leopoldo Méndez is considered the finest printmaker in the history of Mexico. In 1937 Méndez, Luis Arenal, and Pablo O’Higgins founded the Taller de Gráfica Popular (Peoples’ Graphic Workshop) in Mexico City, which was active through the 1960s and produced thirty-five major portfolios of woodcuts, linocuts, and lithographs. The TGP was grounded in a belief in art’s capacity for social protest and the betterment of the nation’s people.

Méndez was born in Mexico City, one of eight children, to a shoemaker father and a farm worker mother who was of indigenous Nahua heritage. His parents died before he turned two years old and he was raised primarily by his aunt. He became interested in drawing in primary school and he later related that he had competed with another boy in his class to be the best at drawing battleships. His father’s family had been activists—his paternal grandfather died in a battle during the French intervention in Mexico and his father resisted the Porforio Diaz regime, resulting in the burning of his store. Méndez became politically active, supporting the goals of the Mexican revolution but working quietly and mostly anonymously, opposing the concept of making art for profit due to his belief that the true value of art was its social utility. An artist whose whole life was influenced by the early violence and moral promises of his country’s revolution, Méndez continually worked in collaboration with other artists to express his belief in the revolution’s vision.

What is a Print? MoMA interactive