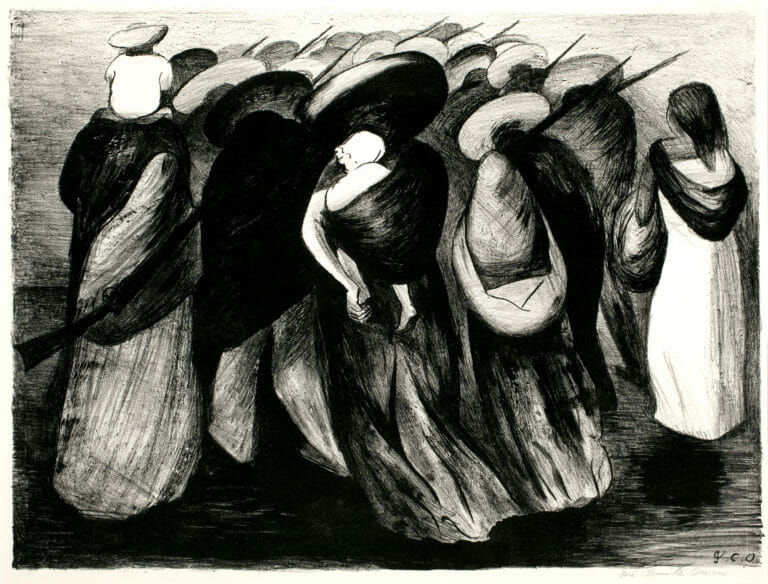 José Clemente Orozco created La retaguardia, or The Rear Guard, in 1929. Though Orozco painted many murals, he was also a renowned printmaker. The Rear Guard is a black-and-white print created using lithography, a printmaking method that uses limestone blocks or aluminum plates to transfer ink drawings to a sheet of paper. The Rear Guard was created by drawing the image onto the print plate using an oil-based crayon. Though Orozco’s prints may be less monumental in size than his murals, they are no less powerful in their expressions of human suffering and strength of will.

The term “rear guard” refers to the portion of a military force whose job it is to protect the main force from a rear attack. The rear guard pictured in this print is made up of mestizo peasants. Mestizos are Mexicans with mixed Indian and European ancestry. In the period preceding the Mexican Revolution, most mestizos were landless and working on estates or in mines, where they received poor treatment and very little compensation. Despite the risk of injury and death, both men and women mestizos were inspired to fight in the Mexican Revolution in hopes of achieving emancipation from what they believed was a corrupt government.

The Rear Guard depicts a mass of people, clustered tightly in the center of the picture plane. Though the group appears to consist of nearly two-dozen men, women, and children, the figures recede into the background, suggesting an uncertain number. Their backs face the viewer as they march forward across a flat and empty plane. The figures’ heads hang low, indicating a long and arduous journey. Orozco emphasizes a group identity by depicting the figures en masse and from behind; there is little sense of individualism in the image. Many people wear the same style of sombrero and carry rifles that rest on their shoulders. Their similar postures, clothes, and weaponry, tilted to the right at the same angle, suggest the uniformity of a trained military force or a group of people joined in a collective effort. The black-and-white medium of the print reinforces the somber tone set by Orozco’s subject, but also enhances a sense of a strong, collective unit; individuals disappear into a solid mass of black, white, and gray. Though these people are perhaps far from the comforts of their homes, they walk together, united for a common cause. In The Rear Guard, Orozco emphasizes the important role that civilian soldiers played in the Mexican Revolution. Monumental and solemn, The Rear Guard is an expression of the strength of a people who took tremendous risks to create a better life.

José Clemente Orozco was born in 1883 in Zapotlán el Grande, a municipality in the southwestern Mexican state of Jalisco. In 1890, Orozco and his family moved to Mexico City where, on his walk to school, he would observe Mexican illustrator and political satirist José Guadalupe Posada at work in an open-front print shop. Guadalupe Posada’s best known work criticized the lives of the upper classes during the dictatorial presidency of Porfirio Díaz, a time of disparate wealth and power among the people of Mexico. Orozco’s exposure to Guadalupe Posada’s work fostered his lifelong interest in social commentary on issues related to the struggle for equality, the Mexican people, and the human condition. Of Guadalupe Posada’s influence, he said “This was the first push that set my inspiration in motion and impelled me to cover paper with my earliest figures; this was my awakening to the existence of the art of painting…”

At the behest of his father, Orozco attended the Agricultural School of San Jacinto from ages fourteen to seventeen. Sometime during his three-year education at San Jacinto, an accident involving gunpowder left him with damaged eyes and no fingers on his left hand. Despite this setback, and with a preference for painting and drawing over an agrarian lifestyle, in 1905 he returned to Mexico City to study art at the Academy of San Carlos. Here he was exposed to an array of artists and influences, particularly the influence of Italian renaissance painting. (The Mexican painter Gerardo Murillo, better known by the adopted name of Dr. Atl, shared his admiration for the murals of the Italian renaissance with his students.) The Mexican Revolution began in 1910 while Orozco was a student at the Academy. This violent uprising against the autocratic Díaz lasted until 1917 with continued periods of violence into the 1920s.

In the early 1920s, José Clemente Orozco, Diego Rivera, and David Alfaro Siqueiros, known as Los tres grandes (The Three Great Ones), received commissions from José Vasconcelos to paint murals on the walls of public buildings in Mexico. Vasconcelos, the Mexican Minister of Education, was a driving force in the state sponsorship of public art that promoted the movement known as Mexican Modernism. Centered in Mexico City, this vibrant period of artistic achievement reached its height in the 1920s and 1930s. The movement’s artists and intellectuals focused on expressing the nationalist and socialist values of post-revolutionary Mexico as well as the country’s pre-colonial native history through writing, photography, painting, and drawing.

Orozco’s early murals were apolitical and influenced by a European aesthetic with little reference to the socialist values that the Revolution championed. Reflecting on these early murals as a time of trial and error, he infused his later murals with emotional and intense depictions of the suffering that characterized the lives of the Mexican people during this tumultuous period. Along with Rivera and Alfaro Siqueiros, he was a leader of the Mexican muralist movement; together, they cultivated a Mexican mural tradition and earned many important commissions in the United States. Between 1927 and 1934, Orozco lived in the United States where he completed one of his most famous murals, The Epic of American Civilization (1932–34), for Dartmouth College in Hanover, New Hampshire. In conjunction with the mural tradition, the Mexican Modernists also cultivated a print renaissance. Orozco was a major contributor to this printmaking culture with his dark, emotional, and expressionist lithographs like The Rear Guard.

What is a Print? MoMA interactive