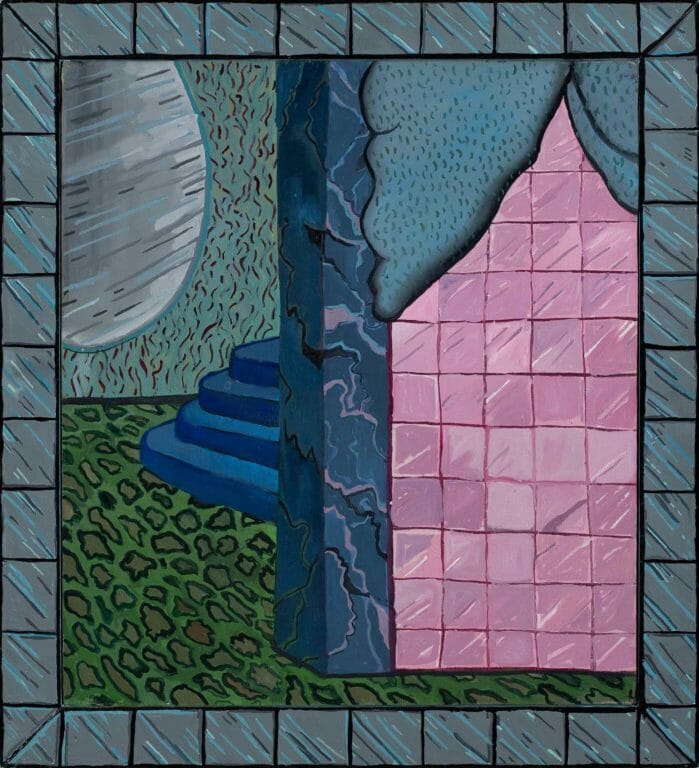 Philip Hanson’s Mezzanine beckons us into a richly colored architectural space while simultaneously preventing us from knowing where the space leads or what lies at the end of its passageways. Dominated by distinctive painted textures and cool colors, the image is extended and enclosed in a frame painted by the artist. The blue rectangles of the frame echo the colors and complement the textured shapes of the painting itself.

Mezzanine is full of mystery and ambiguity in its form and potential meaning. The painting is divided nearly down the middle by a vertical blue support that is veined like marble. To the right of this form is a grid of imperfect squares—perhaps depicting a passageway—that modulate in color between soft pink and lavender. Three blue shapes suggest curtains that have been parted to reveal the pink wall behind. The “curtains” have shaded black outlines and are flecked with darker blue marks in the same color family as the frame. There is little suggestion of depth on this half of the painting, making the relationship between the blue curtains and pink wall (or passage) unclear.

Connecting the right half of the painting with the left half is a patterned floor composed of what looks like green-on-green leopard spots. With curving blue steps clearly behind the blue marble support, and a patterned blue wall behind them, the left half of the painting has a more legible recession into space than the right side. A long oval that is cut off by the top and left side of the frame might be a window (but with the view obscured by raking diagonal lines) or a mirror (but without a reflection). Like the space defined by the pink passage, it, too, is ambiguous.

Although Mezzanine presents an interior space in the long-standing tradition in Western art history, Hanson’s emphasis is not on an accurate rendering, but rather on patterns and shapes. With its painted frame, rich decorative patterns, and strongly defined forms, the shallow space depicted in Mezzanine invites as well as encloses. Its title makes reference to a particular location in a building: a low, partial story that is typically between the first and second floors. In modern American English, “mezzanine” also refers to a level of audience seating in a theater. And indeed, the heavily patterned interior and curved, broad stairway in the painting recall the ornate decoration of late nineteenth- and early twentieth-century theaters and movie houses that used to dot American cities. In Mezzanine, Hanson has created a transitional space—a space in between—that offers tantalizing hints of passageways to what might lie above or below.

Philip Hanson received a master’s degree from the School of the Art Institute of Chicago in 1968. He began teaching there in 1973 and retired forty years later, in 2013. Hanson participated in the False Image exhibitions at the Hyde Park Art Center in 1968 and 1969. Also exhibiting at the time were Roger Brown, Eleanor Dube, and Christina Ramberg, and the exhibition title pointed to their shared fascination with theater and masks. Hanson also shared an interest in comic books and decorative abundance with his contemporaries, but where many of the Imagists employed a tone of sarcasm and slapstick humor, Hanson’s body of work is frequently described as romantic, sensual, and dreamlike. The artist’s long-standing interest in poetry has found its way into his work as well; recent works combine words and phrases with layers of patterns and images. Hanson continues to reside in Chicago.