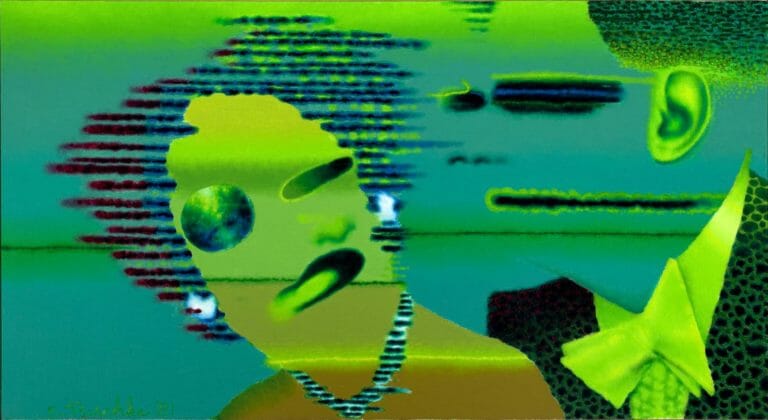 With their electrifying greens, yellows, reds, and blues, La Chanteuse and Prothesian have the glow of a TV screen in a darkened room. Strong horizontal lines radiate color and create an effect of electronic interference. Ghostly figures appear amidst the static and seem to flicker between two and three dimensions in an infinite space. In La Chanteuse, facial features are diffuse. We note the tip of a nose, a pair of earrings that gleam like little moons, an irradiated necklace, and a bow tie that tilts at a jaunty angle. The two figures in Prothesian are more defined: their hands, seemingly outlined with neon, mask their owners’ faces. The figures’ striking glasses glow white against the lavender background. Interestingly, in both paintings the subjects’ ears are their most pronounced feature.

La Chanteuse translates from French to “female vocalist.” The painting may feature a couple enjoying a song, or perhaps a singer and a lounge lizard dressed in a flashy tuxedo. The context of Prothesian is less clear, but one can imagine a corresponding atmosphere: the close air and artificial lights of urban nightlife.

While the identities of the pictured individuals are mysterious, much can be read in their interactions. Ed Paschke’s figures appear to dissolve into their pulsing backgrounds, creating a sense of environmental discordance. In La Chanteuse, the vocalist’s orb-like eye looks out at the viewer, while her left eye and mouth simultaneously slide toward the tuxedoed man. The space between the two figures is also telling: the female figure faces the viewer, tilting her head to the left, while the male figure appears to look beyond her at something “off stage.” Vibrating horizontal lines suggest an interference in their communication. By contrast, both individuals pictured in Prothesian face the viewer squarely. Although there is space between them, their eyeglasses morph into a single mantel—a deliberate compositional device that leads us to imagine their potential connection.

Though images that reference digital culture may feel common today, La Chanteuse and Prothesian looked radical when they were painted in the early 1980s. Mimicking the visual language of technology, with its static and surging electric impulses, Paschke veils his figures in distortion, evoking the loneliness, disjointed communications, and deceptions of the modern age.

Ed Paschke was born in 1939 on the northwest side of Chicago. He had an early interest in art, developed largely through his fascination with his father’s ability to make things. An interest in drawing and cartooning was encouraged by the caricatures drawn by his father in the letters he sent home while stationed in Europe after World War II.

In high school, Paschke excelled in art and athletics. He was often featured in his school paper not only for his athletic successes, but also in the bylines of his frequently contributed illustrations. His preference for art would prevail and he obtained a bachelor’s degree from the School of the Art Institute of Chicago (SAIC) in 1961. A subsequent scholarship afforded him the opportunity to travel to Mexico, which he found compelling for its exuberant culture and use of color and patterns. Following his return to Chicago, he worked briefly as a psychiatric aid, which he described as having “left a great mark on my soul and consciousness and sub-consciousness.” In 1962, he was drafted into the army and served a two-year assignment in Louisiana, where he encountered a rural way of life that differed significantly from his largely urban upbringing. After a brief period of travel, he returned to Chicago and completed a master’s degree at SAIC. It was during this time that his fascination with people living outside the mainstream of American life deepened.

Ed Paschke’s visual style aligned him with the second generation of Chicago Imagists, a group that distorted forms and figures from mass media in order to analyze social and political issues. He used images from newspapers as a resource for his early paintings, which showed thugs and showgirls, boxers with broken noses, and tattooed circus performers. He later shifted to the abstract visual language of La Chanteuse and Prothesian to explore perception and deception in the new digital age. His later work featured distorted portraits of prominent figures from history such as Abraham Lincoln.

Paschke’s extensive exhibition history included participation in seminal group exhibitions at the Hyde Park Art Center, including Nonplussed Some (1968), Nonplussed Some Some More (1969), Marriage Chicago Style (1970), and Chicago Antigua (1971). Paschke also received numerous individual recognitions, such as inclusion in the 1973 Whitney Biennial; solo exhibitions organized by the Contemporary Art Center, Cincinnati; the Renaissance Society, University of Chicago; the Lowe Art Museum, University of Miami; and a retrospective exhibition organized in 1989 by the Art Institute of Chicago that traveled to the Centre Georges Pompidou in Paris. While Paschke left behind a significant legacy as an artist, he was also a highly regarded educator, primarily providing instruction in art theory and practice at Northwestern University from 1976 until his death in 2004.

Eye on the Arts: Chicago Imagism