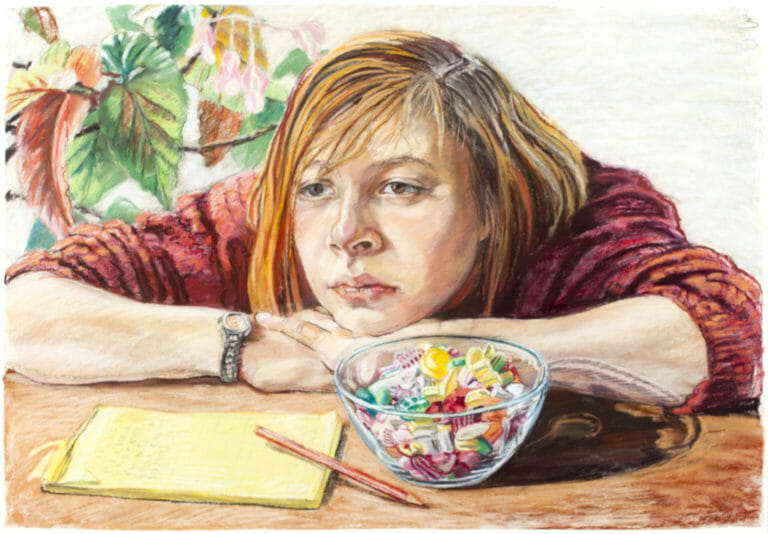 Sasha with a Bowl of Candy

During an interview with Janet Fish, Carter Ratcliff commented on the narrative aspect of her paintings, saying, “You seem to present moments when the action has ceased, a gap in the narrative. All the action, so to speak, is in the flow of light across the surface of the painting” (Janet Fish, Ratcliff 1985). Janet Fish presents one of these moments in her pastel Sasha with a Bowl of Candy. An adolescent girl hunches over a wooden surface, perhaps a table or a desk, her forearms spread across the surface from nearly one side of the composition to the other, her chin resting on the back of overlapped hands. Behind her to the left, the leaves of a flowering plant emerge from an indistinct gray background. Before her lay a thick glass bowl of colorful hard candies, a pencil, and a small pad of lined, yellow paper containing faint, indecipherable writing. Sasha is not focused on these objects, however; her face and body are angled toward the left, and her gaze wanders off in that direction, toward a point outside the composition. The frozen face of the watch on her right wrist hints at the passage of time. With her placid face, heavy eyelids, and glossy eyes, Sasha seems to drift, perhaps lost in a daydream. One wonders what she is thinking, and what is written on the notepad before her.

Fish has given us this hint of narrative to pull us in, but the narrative is not what interests her in a work of art. Fish has said of her work, “The real subject is the light, movement, and color and echoes the objects in one’s mind.” Let’s take a look at what Carter Ratcliff referred to as the “action” in Sasha with a Bowl of Candy.

Warm light flows over the composition from the upper left, catching the folds of Sasha’s sleeves, creating saturated orange highlights in the hair that falls around her face, and warming her skin with touches of pink and yellow. The light glints off the crinkled cellophane wrappers, passes through the candy and the bowl, and swirls in the bowl’s shadow. Like the Impressionists, Fish is interested in the qualities of light. She is well known for her still lifes of translucent objects flooded with light. However, unlike the Impressionists who sought to capture the qualities of light in a single moment, Fish paints the effects of light over time. She paints a section of a still life when the light there is interesting and exciting to her. In this way, her drawings and paintings are a blend of different moments.

The flow of light is not the only element creating a sense of movement in Sasha with a Bowl of Candy. Fish says, “It seemed to me that composition is about grabbing the viewer’s eye and keeping it there in the painting and trying to keep that eye moving around the painting and not let it escape [. . .].” Fish arranges the objects within the composition to move the viewer’s eye toward and around Sasha’s face. The slanted line of the pencil in the foreground leads the eye up and in from the bottom. Shadows on the right side of the face and candy bowl point toward the center. The flowing lines of Sasha’s hair and the repeating curves of the wrinkles in her sleeves lead the eye back toward her face. Fish also moves the viewer’s eye around the composition by filling the page with a squat rhombus created by the slopes of Sasha’s head and shoulders down to her elbows, the edge of the bowl’s shadow, and the line of the pencil. With all this implied movement, the strong, horizontal line of Sasha’s forearms set at slightly below center grounds the figure and gives it weight and stability.

Color also ties the objects in Sasha with a Bowl of Candy together. In each work of art, Fish chooses a limited number of colors to work with. She blends and combines these colors to provide cohesion. The pinks in the candy are subtly reflected in the face. The gray of the background on the right repeats in the glass bowl. The deep greens of pieces of candy appear again in the plant’s leaves. This color repetition links foreground, middle ground, and background. When speaking of her use of color, Fish says she owes a lot to Abstract Expressionism. “Basically, a lot of what I do is still coming out of that, to the point that I’m very aware of the movement within the painting, from one thing to another. [.…] A lot of times, I take a color, and I just happen to have it, and I’m moving around in the painting finding it in different places, and then I start to focus on one place and start to follow movements.”

Where Fish uses light, composition, shape, and color to establish relationships among the elements of the composition, she uses a variety of marks to make each object distinct. Fish said, “Each thing has a different feel to it. This is very important. I’m very aware that each thing has its personality, its character, and I try to find a mark for it.” Compare, for example, the loose, curving marks used to describe Sasha’s sweater with the smooth, linear strokes that describe her face and arms.

Light, movement, color, shape, and line—Fish uses these elements in Sasha with a Bowl of Candy to describe a particular person in a specific place and time. Although she works in a representational style, she defines realism in her own terms: “That’s how it looks to me, though I’m aware that realism, so-called, is a matter of painting what you choose to see. I look for a complex interaction of color, and that is what I find. So I paint that. Another painter might choose to find something more simplified.”

Janet Fish was born in 1938 into an artistic family. Her mother, Florence Whistler Voorhees, was a potter and sculptor; her grandfather, Clark Voorhees, an Impressionist painter; and her uncle, Clark Voorhees, a woodcarver. Fish always knew she wanted to be an artist, and spent much of her childhood living in Bermuda, surrounded by art and light. Fish’s father, Peter Stuyvesant Fish, would dig up old glass bottles and place them in the windows of her family home. Fish has remarked that this, as well as the intense light, vibrant colors, and dense vegetation of the island, may have influenced her later choices of style and subject matter. At age 11, Fish took art classes and helped her mother in her pottery studio. She was later apprenticed to artist Byllee Lang, a sculptor whose studio functioned as a gathering place for the artists, musicians, and intellectuals of Bermuda.

Fish pursued her formal education at Smith College, the Art Students League in New York City, and the Yale School of Art and Architecture. She was influenced by teachers Alex Katz and Leonard Baskin, the works of Fairfield Porter, David Park, and Richard Diebenkorn, and fellow students Chuck Close, Nancy Graves, Sylvia Mangold, Richard Serra, and Harriet Shorr. While Fish was in school, Abstract Expressionism was well established, and young artists were beginning to look toward a new way of making art.

In 1962, while studying at the Skowkegan Summer School, Fish chose to pursue landscape painting, and began painting still lifes the following winter—a genre that would eventually establish her reputation. In the meantime Fish worked a series of odd jobs, having graduated from Yale with a Masters of Fine Arts Degree but not yet able to make a living through her art. In 1966 she befriended her new neighbor, sculptor Louise Nevelson, who became a source of advice and encouragement. Fish began having solo exhibitions in 1968 of the large-scale paintings of plastic-wrapped fruit that she was making at the time. Fish’s art continued to evolve; in 1973 she began painting glasses of water in sunlight. In 1978 she added elements of landscapes and nontransparent objects; in 1982, figures. Fish stopped using pastels in 1987 because of health concerns, replacing them with watercolors.

Janet Fish has taught at the Skowhegan School of Painting & Sculpture and the School of the Art Institute of Chicago, among others. She has been awarded a MacDowell Fellowship in 1968, 1969, and 1972 and the Girl Scouts’ Woman of Distinction Award in 1993.