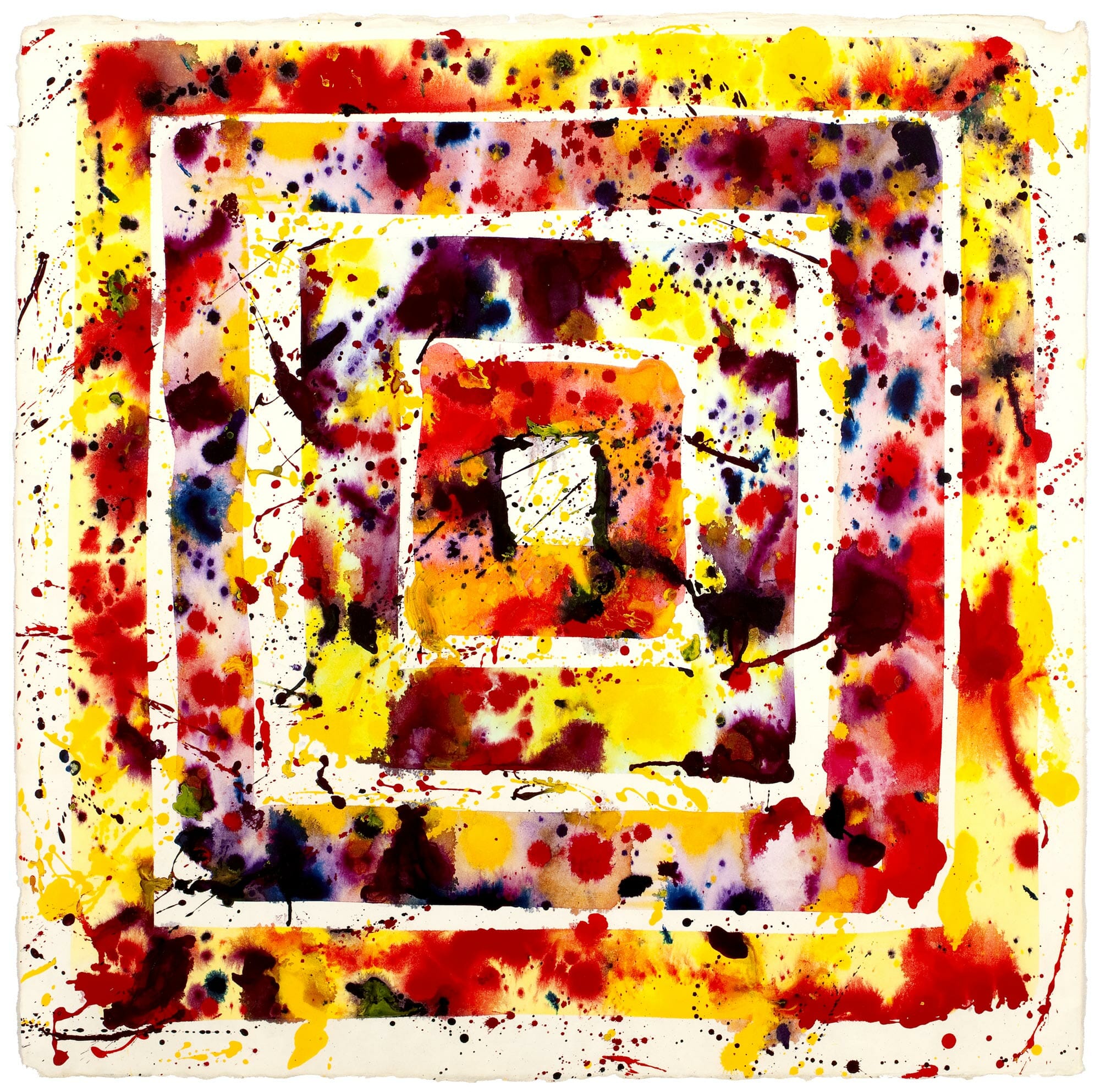 Radiating from a white center, four concentric squares of bright color glow from the surface of a large square sheet of white paper. Yellow, red, and blue puddles merge in hues of purple and orange. Random drips and streaks of flung paint splash across the ordered geometric shapes, uniting the exuberant composition. Most edges of the square bands are sharp and straight; some waver slightly. Joyful energy seems to drive toward an unfathomable depth in the middle, diving through a window toward a boundless space.

Called Untitled Mandala, the name and the shape of this painting symbolize the four legendary corners of the universe. In the classical Sanskrit language of India, the word mandala means “circle” or “wholeness” and implies the circle of life itself. In Asian art and religion, geometric mandalas, often in the form of a square enclosing a circle, represent all things living and non-living, seen and unseen, and are aids for meditation and spiritual reflection.

Sam Francis has said, “I prefer to think of colors in relationships to each other, rather than just one color at a time. So, even very small amounts of one color related to large amounts of another have a very curious and mysterious relationship already set up the minute you start using color.”

Francis was born in San Mateo, California, in 1923 and educated at UC Berkeley. His earliest interests were music and literature, including the writings of Eastern philosophers. During his service in the Army Air Corps during World War II he was injured during test flight maneuvers. He began to paint during the four-year hospitalization that ensued from the development of spinal tuberculosis. First, he was inspired by reproductions. Then a friend brought him original paintings by such artists as Klee, Picasso, and Miró. Francis soon made his first museum visit. “Painting became a way back to life for me. Now it is no longer that but a way of life. But in those four years on my back it was life itself. I painted to stay alive.”

After Francis’ release from the hospital he settled in an artist colony in Carmel, California, and began to make his first abstract paintings. Later he lived in Paris among a group of American painters who were exploring expressionist and action painting ideas, and spent time in Japan exploring his interest in Eastern philosophies, including Buddhism. In the 1960s Francis returned to California, where he became known for his major large-scale paintings on canvas. He also enjoyed painting on paper and works like Untitled Mandala were painted with spontaneous gestures and radiant colors that express joy and spirituality. He mixed his own paints to let chance create unexpected color combinations and thinned his paints for a transparency that would suggest flowing movement.

Sam Francis: The Exploration of Color