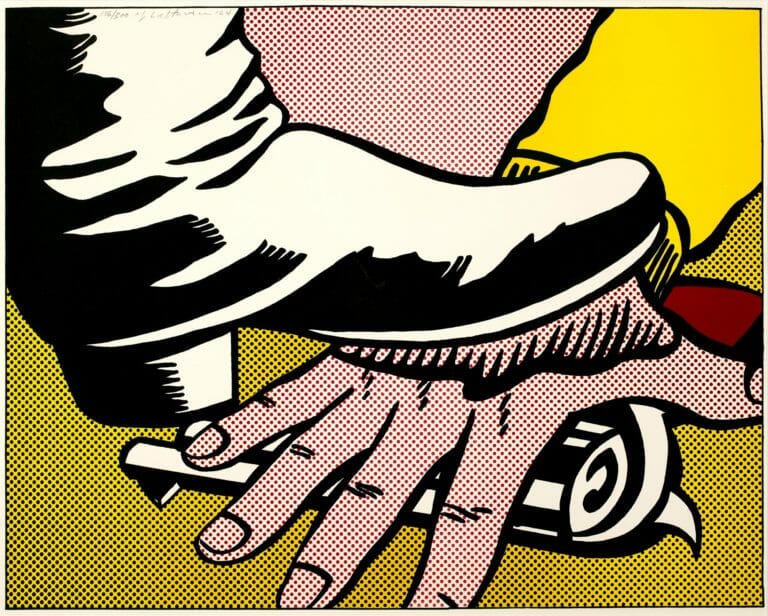 In this dramatic moment a booted foot stomps on a hand that has reached for a gun. Whatever has happened before and what is going to happen next are not revealed, but questions about the clues are invited! Is the foot wearing a cowboy boot or a dress boot? Does the foot belong to a woman or man? Does the hand belong to a teenager or adult? In whose possession was the gun moments before? Which person is being threatened? Would an innocent observer be glad the foot blocked the hand, or not? What is going on here?

This moment seems to be a turning point in a provocative storyline. The action is indicated by a string of short, repeated lines that give a non-verbal description of the direction and force of the boot’s movement. Ouch! The toe box of the boot is long, making the foot seem large. Even though the boot is black, white space suggests light reflecting off an apparently well-shined shoe, perhaps one belonging to a person with power. The light reflection suggests that the action could be taking place in daylight or in a lighted space. All these clues tempt a viewer to step into the place of one of the characters, to assume a role, to imagine some motives, to feel some feelings.

Even with just a glance, it’s easy to recognize some characteristics this picture shares with cartoons and comics: Simple black outlines define the shapes and volumes. Just three colors―yellow, black, and red―distinguish the sleeve, the boot, and the grip of the gun. The colors are strong, and an overall lack of tonal variation creates a flattened appearance. Some textures in the hand and background space are suggested by red and black dots, which look like colored Ben-Day dots printed onto the white newsprint of comics. Unlike many comics panels, however, there is no written text, so interpretation is left to the viewer.

Like many paintings, prints, and sculptures by Roy Lichtenstein, this picture is based on a frame from a comic. Lichtenstein looked at comics throughout his life, and one artist whose works he liked was Dick Giordano, who drew images for a series based on Billy the Kid, the legendary gunslinger of the old West. Foot and Hand is one of Lichtenstein’s earliest pop art prints, modeled on a moment in one of these comics.

Born in 1923 in New York City, Roy Lichtenstein developed an interest in comic books during his childhood and took watercolor painting classes during his school years at the Art Students League. His college studies were interrupted when he was drafted into World War II, but he later completed Bachelor and Master of Fine Arts degrees at Ohio State University. Lichtenstein was influenced by the teaching of Hoyt L. Sherman, a Fauvist painter, designer, and architect who taught that the act of representation should be separated from everyday experience and considered solely for its formal qualities, as an “abstraction.”

Early in his artistic career Lichtenstein studied the work of Pablo Picasso, Paul Klee, Wassily Kandinsky, and Joan Miró. Eventually he realized that some of the techniques employed by these artists were also used in the comics he loved, including outlines, abstracted shapes, and flattened forms. He started not only adapting imagery from comics, but also imitating the appearance of their commercial printing by painting patterns of colored circles that imitated the Ben-Day dots of newsprint. For an exhibition in 1961 he made a painting of Mickey Mouse and Donald Duck, which reportedly emerged from a challenge by one of his sons, who pointed to a Mickey Mouse comic book and said; “I bet you can’t paint as good as that, eh, Dad?”

Lichtenstein did not just appropriate comic images. He looked for panels showing a moment in the narrative that had “the crux of the story in them” and then made slight alterations, including cropping, widening lines, and changing hues that highlighted the formal elements of the composition and froze the action and feelings. He wanted his images to look machine-made and transitioned to using a variety of stencils for creating the dots in his images. In doing so, he believed he was making a kind of abstraction, one that reflected contemporary interests and industrial techniques but also probed the basics of composition and the processes of visual perception.

The History of Pop Art