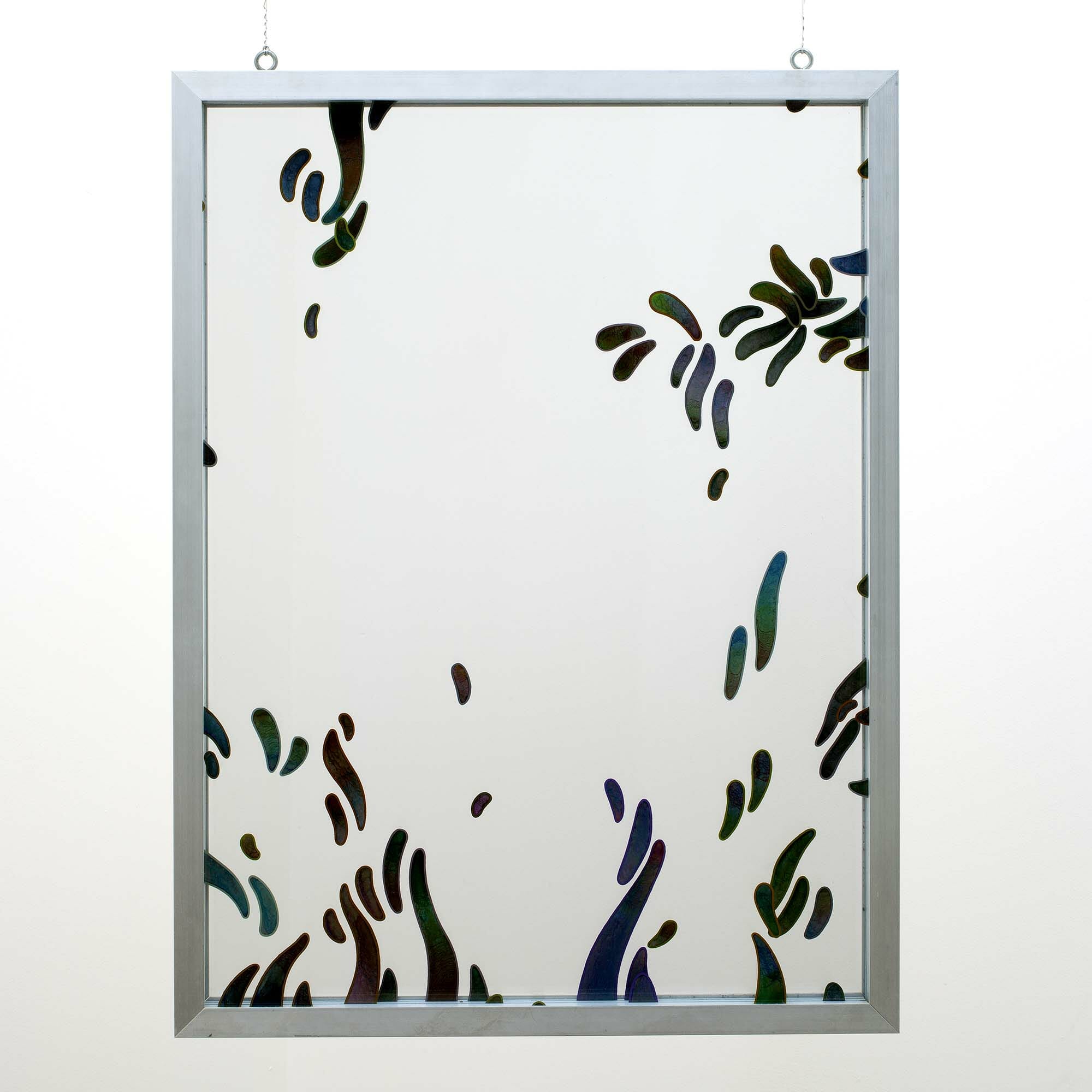 Ed Flood’s Aluminum Floater #2 is made from layers of Plexiglas in an aluminum frame. The artwork’s transparency causes its environment to be part of the composition. Organic shapes resembling seaweed, or perhaps amoebae or other microscopic life forms, seem to emerge from the edges of the frame and wriggle across the surface. These multi-hued shapes are thinly outlined in shades of blue, green, gray, purple, or brown, suggesting the shimmering colors of an oil slick, or the bioluminescence of deep sea life.

With its muted palette and spare composition, Aluminum Floater #2 combines subtle coloring and simple shapes with extensive negative space. In other instances where the Imagists used Plexiglas as a canvas—for example, works by Barbara Rossi and Jim Nutt, who painted on the reverse side of a single sheet of Plexiglas—the artists covered most of the surface with their imagery. In contrast, Flood emphasizes an open composition.

Ed Flood’s work is characterized by an extraordinary degree of attention to craftsmanship, both in his painted imagery on Plexiglas and in the construction of the boxes that hold layers of these compositions in suspension. Influences, especially for his more colorful early works, included popular cultural references such as advertisements and comics, and the brightly colored graphics of pinball machines; these creative sources were noted by critic Robert Storr in his essay on Flood’s work, “Tropical Isles for a Cold Climate.” Among other tropes, palm trees set within various lush southern landscapes are a recurring motif in his earlier work. These images later give way to a more abstract vocabulary of biomorphic forms, as in Aluminum Floater #2, that nevertheless seem inspired by nature.

Ed Flood was one of the Chicago Imagists native to the city. Born in the suburbs in 1944, he moved into the city in the early 1960s and earned both bachelor’s and master’s degrees from the School of the Art Institute of Chicago. Flood first exhibited his work at the Hyde Park Art Center as part of the 1968 Nonplussed Some exhibition, and regularly exhibited with the Imagists in the early 1970s. In 1972, he moved with his wife Sarah Canright, another Imagist artist, to New York City. Flood achieved success in New York, but died in 1985 at the age of 41.