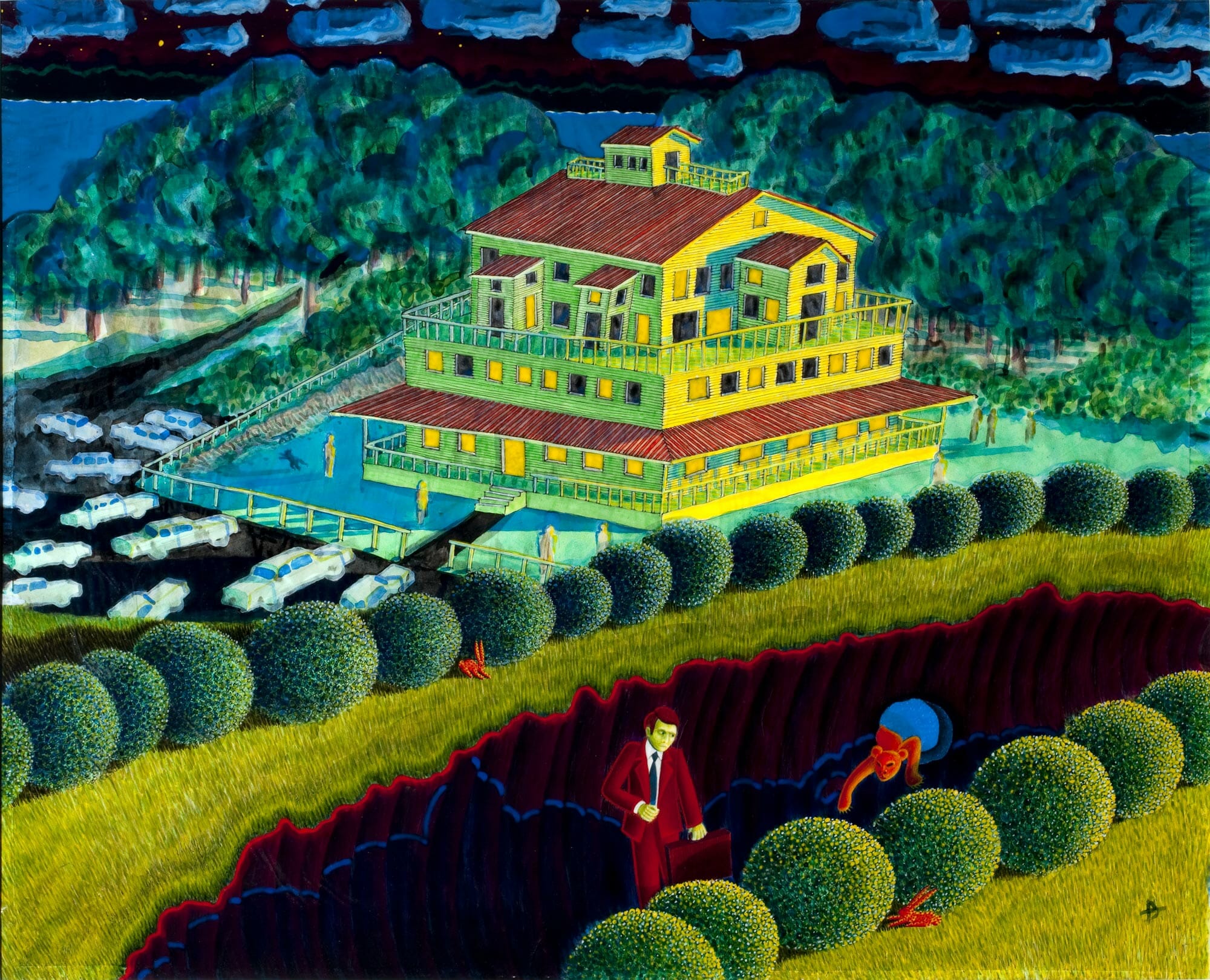 In Moonrise, an apparently festive occasion—people arriving at a brightly lit pavilion for a night of dancing—forms the backdrop for a potentially dangerous encounter. The action takes place in the bucolic surroundings of a lakeside resort. Stars twinkle in the sky as moonlit clouds float serenely overhead. The round shapes of shrubbery echo the rhythms of the clouds overhead, while motionless tree canopies suggest the calm night air. The glow of lights inside the building seems to beckon the people on the lawn to come inside. The rising moon, which is hidden from view, illuminates the scene.

In contrast to the happy occasion of a community dance, a tense narrative is taking shape in the painting’s foreground. Standing within the walls of a dark ravine is a man in a suit who is carrying a briefcase. This nighttime excursion has a surprise in store: a cougar emerging from her den, eyes focused on this human intruder. The man seems frozen in place as he contemplates the perilous situation that confronts him.

The close proximity of man and cougar, who is emphasized in the composition through the complementary colors of blue and orange, creates tension and a sense of foreboding. Feelings of entrapment are suggested by the diagonal lines formed by the shrubbery and the meandering red line that runs along the edge of the ravine. The intense colors and contrasting tonal values lend a heightened reality, an other-worldliness, to the scene.

According to the artist, Moonrise is the first in a trilogy of works that illustrate a coherent dream in which the antagonist progresses from being “unconscious” of his actions to fully aware and accepting of responsibility. In a prelude to Moonrise, the man has provoked the cougar by deliberately having thrown a rock into her den. Moonrise depicts the moment when he realizes his mistake. In the final work in the trilogy, the man is held accountable for the harm he has caused, and finds peace and reconciliation through humility and mutual understanding.

The setting for Moonrise is based on a resort on the south shore of Round Lake in Minnesota that Brissette had visited during childhood family vacations. According to the artist, Round Lake had a pavilion similar to the building pictured in his painting. He remembers the three-story dance hall as “mysterious and abandoned” and as a young boy thought it was strange that people would enjoy attending a dance there. The red rabbits that appear in the painting are a recurring symbol that represent a protected innocence; as described by the artist, “Wild things go on around them and they are not affected or injured” by the activity that is taking place. The moon of the painting’s title and the feline are symbolic of the female gender.

Although originating from a dream that has specific meaning for Duane Brissette, Moonrise lends itself to multiple interpretations. “Art should be expansive,” the artist says, “a piece of art acquires content as it lives.”

Duane Brissette was born in 1932 in Cloquet, Minnesota, a community with a current population of about 14,500 residents that lies twenty-two miles west of Duluth. Forestry industries have been an important source of employment and economic development from the time that the city was incorporated in 1894. Brissette’s father, a gifted musician, worked in the mills to support his family.

Brissette attended public grade school, but was sent to the preparatory school at Saint John’s Abbey to complete his high school education with the parental expectation that he would enter religious service. He enjoyed the woods and lakes that surrounded the abbey and discovered illustrated manuscripts in its library. By the time he was eighteen, he knew he wanted to be an artist and soon left the abbey to pursue schooling at the University of Minnesota in Minneapolis. He left the university after a few years and went on to a successful career as a creative director for various advertising agencies as well as a writer and designer of advertising for newspapers. Throughout his life, he has continued to make paintings that incline toward surrealism with their heightened sense of reality and use of idiosyncratic symbolism. He resided in Sauk City, Wisconsin for nearly 30 years until his death in 2018.

emphasis special attention or importance given to something

moonrise the rising of the moon above the horizon

surreal having the disorienting, hallucinatory quality of a dream; unreal; fantastic

Images of artwork by Duane Brissette

NASA in-depth resource on the moon