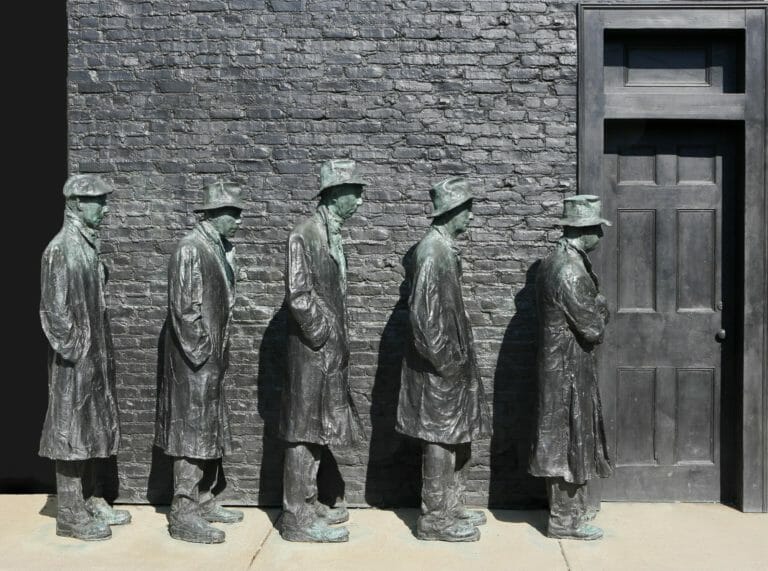 The large sculpture Depression Bread Line by George Segal portrays the experience of many urban Americans who suffered from hunger during the 1930s Great Depression. During this difficult period, which affected the whole world, economies faltered in both industrialized and non-industrialized countries. Primary industries such as mining and lumbering stalled, crop prices fell, and manufacturing businesses slowed or halted production. Unemployment soared throughout the United States to affect one out of every four workers, and farm income fell by fifty percent. Hungry and jobless citizens roamed the country looking for work and food. In Depression Bread Line, five destitute men stand in a line waiting for food, like the hungry thousands who stood at doors of churches and soup kitchens in cities like New York and Chicago.

Depression Bread Line was originally commissioned for part of a new United States Parks Service memorial to President Franklin Delano Roosevelt established on the Tidal Basin in Washington, D.C., in 1997. FDR was elected president in 1932 on the strength of his “New Deal” platform that promised economic recovery. This 3500 pound bronze sculpture gives a profound visual interpretation of the devastating physical, psychological, and emotional effects of the Depression era. Five men, each wearing an overcoat and a hat, stand about a foot apart in line before an old brick wall. Each man stares despondently at the back of the person ahead. They are of different heights and different ages, their faces sharing feelings of resignation and fear, but also determination. Despite their physical proximity, they seem isolated from each other, too dejected to engage with one another. Their coat collars are worn, their pants and coats shapeless. They seem ordinary, real and human, familiar but almost ghostly. Their experience of poverty, hunger, and inability to support themselves and their families is conveyed soundlessly but eloquently by their forlorn postures.

Although this sculpture is made of bronze, Segal is more widely recognized for his white plaster sculptures of figures set into what he called “assembled environments.” To make his plaster sculptures, Segal spent a long time in preparation—deciding on his models, collecting the necessary clothes and assorted props, prepping the models with the right mood and feeling, deciding on the pose, drawing around the model’s feet on the concrete floor to make sure that the position would be correct for each stage of casting, and then casting the model in three stages, each of which took about forty-five minutes. Segal chose models for his sculptures from his group of friends and acquaintances in the field of art. In Depression Bread Line, he himself was one of the models (the fourth figure in the sculpture). Segal molded the upper body first. The model’s upper torso was covered with plaster-permeated bandages that had been dipped into pails of warm water before being shaped around the body, covering the clothes. The artist added more plaster to accentuate details, shaping the bandages to emphasize the back and shoulders, the folds, seams, cuffs and collars of the clothes. The model had to remain inside the cast as it gradually hardened, then was gently removed. He molded the lower half of the body next. Lastly, Segal molded the head. He covered the model’s hair with Nivea cream, a lotion that allowed the bandages to be gently removed without pulling the hair.

Segal created what he called “assembled environments” for his sculpted figures. He used furniture, windows and walls, parts of automobiles, buses or subway cars to make familiar but anonymous scenes of ordinary people. Segal’s treatment of the dried bandage mold as the final sculpture, rather than as a mold to cast a sculpture which could later be altered and perfected, was a breakthrough in art method. The raw quality of the resulting works initially was criticized, but quickly became celebrated for its unique combination of realism and abstraction, for the immediacy of the individual likeness, and for evidence of the artist’s touch over every inch of the plaster, like a painter’s. After many years of making such sculptures, Segal worked with a foundry to use his plaster molds as casts for sculptures made of bronze, enabling him to create life-like figures that were also durable enough to be placed outdoors as public art.

Anchor Standard 2: Organize and develop artistic, ideas, and work
Essential Question: How do artists work? How do artists create works of art that effectively communicate?

Anchor Standard 11: Relate artistic ideas and works with societal, cultural, and historical context to deepen understanding
Essential Questions: How does art help us understand the lives of people of different times, places, and cultures? How is art used to impact the views of a society?

Born in 1924, George Segal spent his youth in the Bronx borough of New York City where, even though his father was a kosher butcher, the family suffered the strains of poverty during the Depression. Segal liked drawing and eventually took several art classes in high school, but he wasn’t encouraged to develop this interest because of the necessity of studying toward a practical career, in which he could “make a living.” While he was in high school, his parents and other socialist-minded Jewish families moved out of the Bronx onto farms in New Jersey in a communal arrangement for sharing resources. Segal’s parents bought a chicken farm and his older brother helped them work on it; Segal stayed on in Brooklyn to live with his aunt and attend high school and start college. When his brother was drafted into World War II, Segal’s parents needed him to work on the chicken farm. He loved the physical labor of building things, an enthusiasm that sustained him while digging three-foot trenches to put in pipes for water and automatic feeders for the chickens, shoveling manure, building buildings, and installing electrical wiring and plumbing. At night he attended college at Rutgers University, enjoying the variety of his studies in history, philosophy, English and Russian literature and comparative religions, and always keeping his interest in art.

After the war ended, Segal married his neighbor, Helen, who worked as a bookkeeper while Segal attended Pratt Institute to become an art educator. This was not what he really wanted to do, but it was a temporary answer to the Depression-influenced need within his family to focus on survival and business and making money. However, he also began to take art classes at New York University, where he was astounded by Abstract Expressionism. The artists, and the philosophy behind their work, had an immediate and deep effect on him, but he couldn’t translate what he was seeing into his own experience. So, he stepped back from art after graduating from college and chose to go back to the physical labor of building his own farm across the road from his parents’ farm. He was painting too, and began to make large figurative, narrative paintings. He then tried making three-dimensional figures out of plaster that were the expressionist equivalent of the figures in his paintings. He put together leftover materials from the farm, like old wood two-by-fours that he wrapped with chicken wire and burlap, dipped in plaster, and scrunched into shapes around the wood armatures, making three figures—one standing, one sitting, one lying—that looked as if they had just stepped out of the paintings into “real space.”

Then a fortunate thing happened. Segal was asked to write an article for an arts and crafts booklet about using a newly invented product, Johnson and Johnson plaster-impregnated bandages, as an art material. He tried it out himself by having Helen wrap his body and the chair on which he was sitting in wet bandages. After the shell dried around him, Helen pried it off in pieces (along with much of his body hair!). He reassembled the parts and plastered them together, creating a sculpture from the mold rather than using the mold to cast a sculpture in another material. Suddenly Segal had solved all the problems with which he had been struggling in his paintings, problems with space, shape, figuration, and expression. He had discovered his “language.” “I just stuck an old table in front of it and so I said it’s a sculpture of a man sitting at a table and then I looked at the chair legs, and the table legs and the plaster legs and I said my god, it’s Cezanne. You know, like here’s all these vertical shafts and there’s a diagonal and there’s a horizontal…And the problem I had in my paintings was that I was so emotionally involved I could never use a ruler, couldn’t have a clean straight edge. And here it was taken care of because there was that chair leg which had it. So…there’s a language—straight lines, curves, color, and the presence was so uncanny, it couldn’t be avoided.”

George Segal was not only a sculptor who loved to work with plaster, molding and shaping his material with his hands—but he was also a deeply thoughtful observer of human interactions and a gentle but fierce critic of social injustices.

Abstract Expressionism  movement in American painting that began in the late 1940s and became a dominant trend in western painting during the 1950s. The most prominent American Abstract Expressionist painters were Jackson Pollock, Willem de Kooning, Franz Kline, and Mark Rothko. They emphasized free, spontaneous, and personal emotional expression, and they exercised considerable freedom of technique and execution to attain this goal.

Great Depression worldwide economic downturn that began in 1929 and lasted until about 1939; the longest and most severe depression ever experienced by the industrialized western world

The New Deal  the economic relief program of the administration of President Franklin D. Roosevelt between 1933 and 1939, which took actions to immediately relieve suffering due to severe unemployment; it included reforms in industry, agriculture, finance, waterpower, labor, and housing, vastly increasing the scope of the federal government’s activities

realism the accurate, detailed, unembellished depiction of nature or of contemporary life; rejects imaginative idealization in favor of a close observation of outward appearances

The George and Helen Segal Foundation

FDR and the New Deal, PBS

The Great Depression, The Library of Economics and Liberty