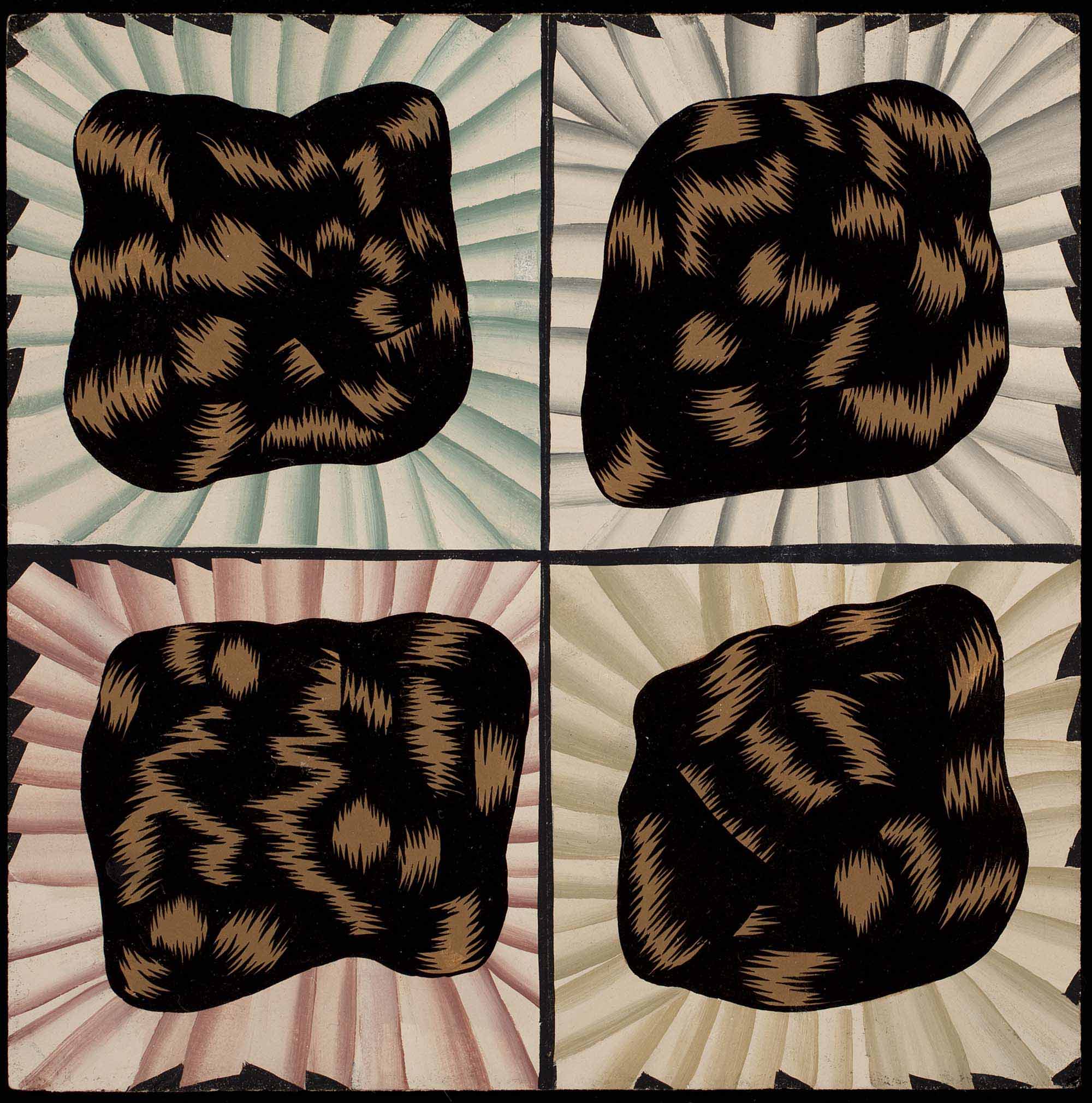 The flat picture plane of Christina Ramberg’s small acrylic painting, Untitled, is divided into a two-by-two grid of equilateral squares. Each quadrant foregrounds a shadowy, hard-edged form that appears to rest atop a delicate piece of pleated paper or ruffled fabric. Within these dark, curvilinear shapes, caramel-colored patches zig and zag in overlapping motifs. Angular lines radiate diagonally from behind the four centers in soft, tonal gradations of monochromatic pastels—green, gray, yellow, and pink—creating the illusion of folds. Against this airy and muted palette, the contoured forms become tactile and object-like, as if rendered in three-dimensions. These parceled subjects, coupled with the work’s composition and intimate scale, make it conceivable that Ramberg has depicted an aerial view of a box of chocolates. The smooth sheen of the acrylic paint adds to this impression. Like gazing down at a box of truffles, the viewer is perhaps first drawn to the entire lot before an individual piece entices the eye for closer study. And yet, something about the light brown highlights and implied volume and texture suggests a more dramatic and irregular topography.

Fragmented body parts figure prominently in Christina Ramberg’s paintings and drawings; estranged limbs, hands, torsos, and backs of heads appear as detached and abstract forms, stylized in cool tones against atmospheric backgrounds. The isolated curios in Untitled were in fact envisioned by the artist as heads of hair. While studying at the Art Institute of Chicago, a ten-cent sale on 6 x 6-inch Masonite at the school store where she worked inspired Ramberg to purchase a large amount and make small paintings of the backs of women’s heads. She continued to work with this subject matter for several years, using her signature electric patterns to create extensive typologies of braided and primped hair, notably never including the face. With this context in mind, one might begin to see the colorful accordion cups as ruffs (stiff, ornate collars made of linen or lace, primarily worn by those of wealth and status in the 1600s), a pleated skirt in mid-twirl, or the neckwear of a circus clown.

As feminists stood up for women’s rights in the 1960s and ‘70s through protests and policy work, artists offered creative rejoinders with works that critiqued, parodied, and at times nuanced the culture of fabricated femininity. Untitled reflects Ramberg’s interest in depicting both the artifice and the appeal of elaborately designed hairdos in response to the pressures of mid-century “beauty rules.” The overall double-reading of this image—women’s heads, or artisanal chocolates?—calls attention to the ways in which women are objectified; in this case, how they are metaphorically conditioned, packaged, inspected, and consumed. Like the Surrealists she studied in art school, Ramberg enjoyed evoking dual, or even several meanings from a single subject. Later on, as a professor in the 70s and 80s, Ramberg would lead drawing exercises asking students to fuse together “one or more objects or qualities of those objects,” or draw objects denied their main function: “How would a comb that cannot untangle hair look?” These creative prompts, which Ramberg used in her own practice, had students thinking outside of the box and away from realistic depictions or literal interpretations.

Christina Ramberg (1946-1995) contributed significantly to the Chicago art scene as a visual artist closely associated with the Imagists, and as an educator at the School of the Art Institute of Chicago where she earned her BFA in 1968 and MFA in 1973. Born in Fort Campbell, Kentucky, the artist lived in many places throughout her life—including Japan at the age of four—due to her father’s post in the army. Exposure to different cultures and locales from an early age inspired within Ramberg a collector’s mentality, and like her professor Ray Yoshida and other Chicago Imagists, she channeled these curiosities through an impressive amassing of source material over the years: folk art, old toys, medical drawings, paper dolls, comic books, textiles, vintage fashion ads, and other bric-a-bracs found at Chicago’s Maxwell Street flea market influenced her work. She organized her paper clippings into scrapbooks, inventorying images and forms into thematic groups alongside her own sketches and handwritten notes. These archival journals reveal the artist’s interest in formal experimentation, particularly with hair and the human body. In Ramberg’s paintings, serial images of women’s heads, viewed only from the back, side, or from above, reflect these typological tendencies—to present and represent a form over and over again in order to examine its cultural currency.

One such repeated form for which Ramberg is known is the female torso, often bound by tight lingerie and cloth appendages in equally tense and cropped compositions. Against the backdrop of second-wave feminism in the 1960s, Ramberg’s constrained subjects highlight the artist’s complicated feelings surrounding the commodification of femininity and women’s bodies. The artist has talked about these motifs in the context of childhood memories: “…I can remember sitting in my mother’s room watching her getting dressed for public appearances… I used to think that this is what men want women to look like, she’s transforming herself into the kind of body men want. I thought it was fascinating… in some ways, I thought it was awful.” In the same way that many cosmetic processes require a steady hand and careful application, Ramberg’s paintings are highly polished and controlled. This attention to detail, combined with the provocative edginess of her fragmented figures, makes Ramberg’s work all the more memorable and relevant today.

Website for Ramberg’s exhibition at the Renaissance Society (Chicago)

Examples of feminist art from the 1970s

Further exploration: Sonya Clark, an artist who works with hair as sculpture

The Root article on discriminatory dress codes in the United States