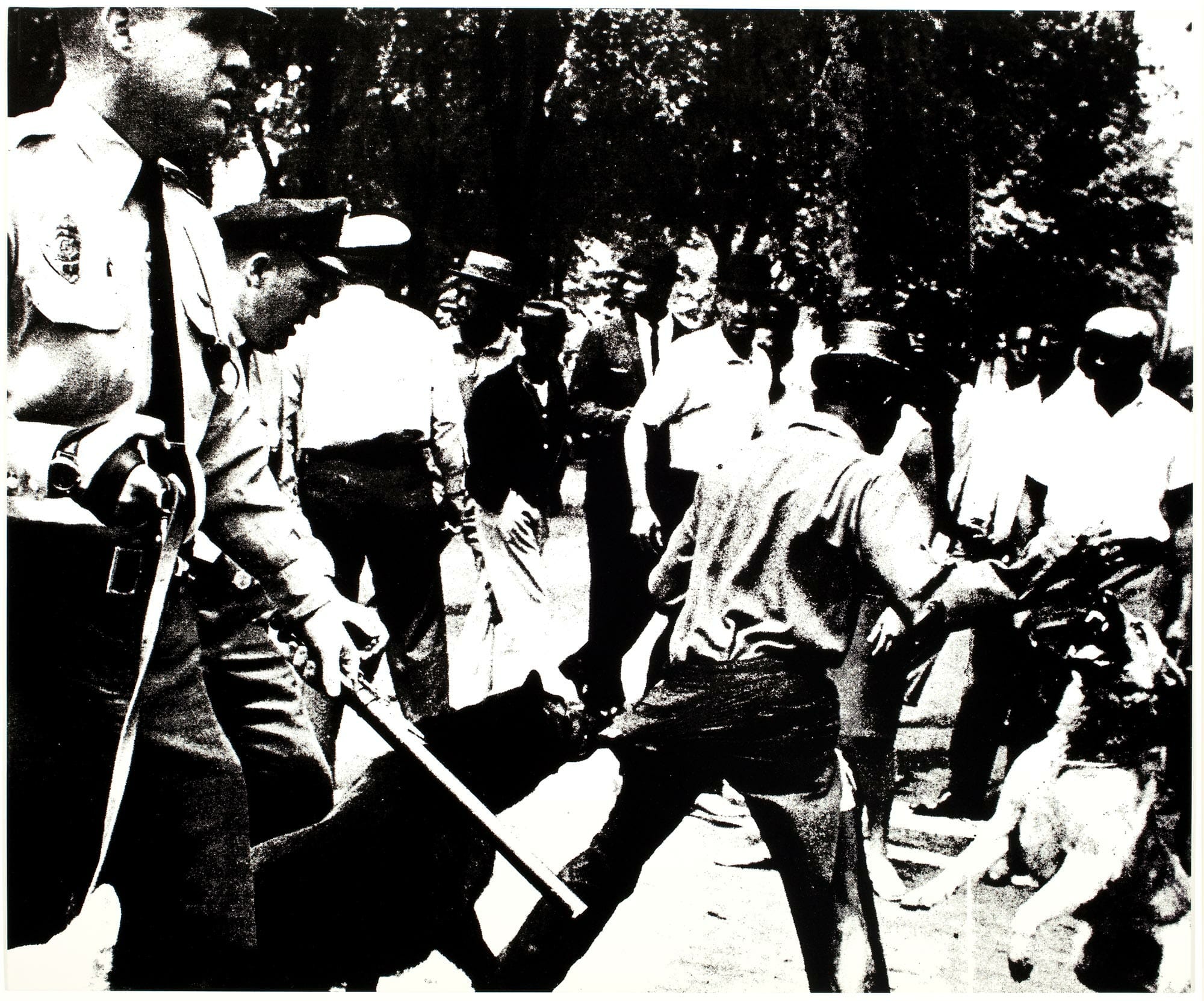 Andy Warhol’s photographic screenprint Birmingham Race Riot reveals a moment during a 1963 civil rights demonstration when white police officers and their dogs attacked black protesters. The original photograph was one of three taken by photographer Charles Moore appearing in LIFE magazine. Warhol appropriated the original image, but he enlarged it, cropped it and chose to portray it as a mirror image of the original so that the police officers appeared on the left rather than the right side. He also significantly emphasized the black-and-white tonal contrast, creating large areas of dense black that were once modulated with gray or white. His cropping emphasized the frenzied movement and noise in the moment.

Three white police officers occupy the left side of the image; two appear in profile and the third turns his back. The officer in the forefront holds a baton in one hand and a dog leash in the other. He appears large and ominous, and because of the way Warhol cropped the original photograph at the officer’s brow and knee, the officer occupies a position of power in the image. In contrast, the demonstrators’ pocketed hands, slumped shoulders, and unrevealing facial expressions disclose the dynamics of the unfolding event. Rather than appearing riotous, they seem to stand on the receiving side of violence. The strong diagonal lines and towering policeman focus attention on the movement of force directed toward vulnerability.

Warhol began Birmingham Race Riot as part of a series of works entitled Death and Disaster in 1962. Warhol took newsworthy images and focused on the phenomenon of their mass production. He was interested in our society’s fascination with violence depicted in mass media. Birmingham Race Riot seems full of political significance with its highly charged black-and-white depiction of a pivotal period in American history. However, Warhol has said that he did not seek to engage in political commentary with the image; he simply chose to represent an image that caught his eye. In contrast, the master printer who worked with Warhol on making the image recalled his calling the event “a blot on the American conscience.” By enlarging this image and representing it as an art object, Warhol joined a long tradition of social and political commentary in modern and contemporary art.

Born Andrew Warhola in 1928 to immigrant parents, Andy Warhol grew up in Pittsburgh, Pennsylvania, and exhibited talent in art at a young age. At eight years old he was bedridden for several months with a disease of his nerves when he was eight years old and his mother gave him drawing lessons. His talent for art was recognized at school.

Warhol went on to study commercial art at the Carnegie Institute of Technology. After graduating, he moved to New York City to begin a career in magazine illustration. There, he gained acclaim for his whimsical shoe designs. He began producing commercial work for Harper’s Bazaar and Vogue magazines and eventually became one of New York City’s top graphic designers. In 1959, he began making large-scale images of his favorite comic book characters such as Superman, Dick Tracy, and Popeye. Warhol soon discovered that another artist, Roy Lichtenstein, had already made an impact with innovative paintings based on newspaper cartoons. Warhol knew he had to produce something different in order to be noticed. A friend encouraged him to paint something that people see every day, like a can of soup; Warhol’s mother often made soup as a way to serve an inexpensive lunch. This suggestion inspired Warhol to ask his mother, who had moved to New York City to live with him, to purchase all thirty-two varieties of Campbell’s soup. What followed were Warhol’s iconic portraits of soup cans.

Warhol’s soup can portraits developed as a new art movement known as “Pop art” emerged. Pop art used the techniques of commercial art and referenced images seen in popular culture. As Warhol has said, “When you think about it, department stores are kind of like museums where images of mass advertising and popular culture that everyone can recognize are a form of art.” Warhol became one of the most prolific artists of the Pop art movement and made art using images readily available to the public, including of Brillo soap pad boxes and celebrities such as Elvis Presley, Jacquelyn Kennedy Onassis, and Marilyn Monroe.