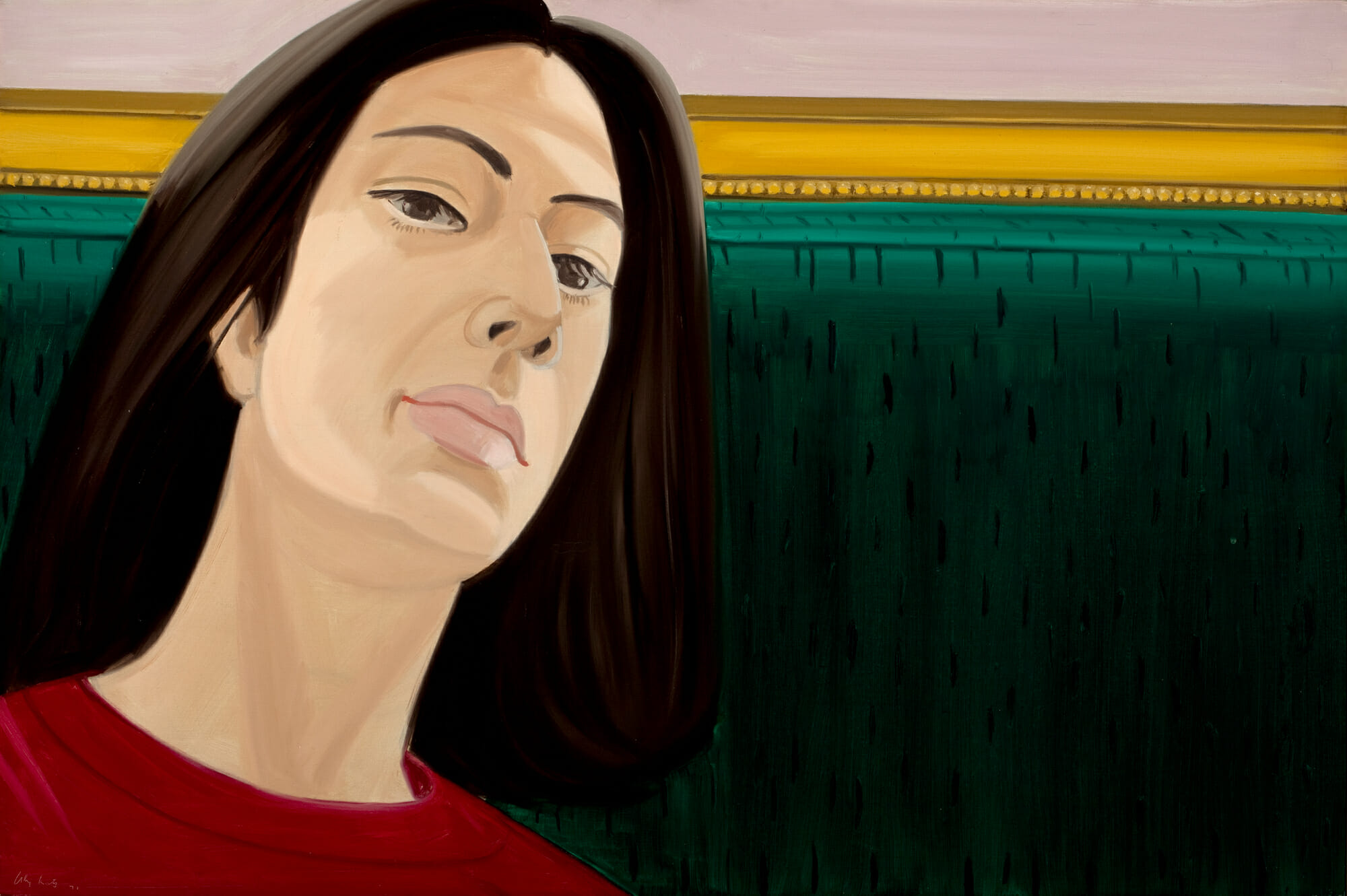 A woman in a red shirt rests her head on the back of a sofa, eyes gazing toward the viewer as if she coolly accepts our observation of her. Her face and neck form a diagonal across the gold-trimmed green couch positioned before a contrasting pink wall. Her dark eyebrows, almond-shaped eyes, and pale pink lips form diagonals in the opposite direction. Her shirt’s neckline curves around the base of her long neck, and light brown highlights in her hair echo short vertical marks in the surface of the couch. There is nothing else in view. The portrait is close-up and intimate; the woman’s features are simplified and her surroundings suggest little about her status, accomplishments, or habits. Because of the title, we know her name is Ada, but it seems as if the focus is only on her exterior appearance, in this moment, and not on clues about her inner life or her personality. Who is she? What is she thinking and feeling? Why has the artist chosen her as his subject?

Alex Katz is interested in using color and shape to depict the human figure during ordinary, passing moments. He crops his views and brings the viewer right up close in order to express the immediacy of the present. Despite his invitation to understand this painting as a portrait of his wife, Ada, Katz’ subject matter is really painting itself. Flat, bold planes of color and strong horizontal and diagonal lines imply three-dimensional shapes and contours without detailed modeling. Katz is a master of painting technique who thinks that by contemplating ordinary subject matter—such as views he paints of the same person over and over, or glimpses of groups of people engaged in ordinary activity—viewers will have to consider the act of, and skill involved in, making a painting. In Ada on Green Couch there is little to be seen of either Ada or the green couch, leading us to contemplate how the artist has conveyed information by placing a light oval contour against a flat, shadowy green plane in a symmetrical and balanced arrangement. He has said, “I believe in technique. That’s probably the only concrete thing that you can say about a painting. You can measure the size of the painting, you can tell someone about the reputation of the artist but outside that, everything is vague. If a painter puts paint on canvas, you get involved in technique. That’s a definable thing: how good the guy’s technique is; what he is in relation to what he does.”

Alex Katz began painting when he was a child, covering the stairwell wall in his New York City home with crayon drawings. In second grade he won a top prize in a city-wide drawing contest. He went to a high school that permitted him to study art half of the day, as well as play basketball, be part of the track team, and learn to dance. When he was sixteen a truck ran into his father’s car when it was stopped at a red light, and killed his father. Two weeks before the accident, Katz had seen an ad for life insurance in the back of a comic book, and on an impulse he had sent in the initial payment (twenty-five cents) on a policy for his father. “We got a payout of ten thousand dollars,” he said. “It was all the money we had then. My mother said I was born under a lucky moon.”

After being in the Navy for a short time after high school, Katz won a scholarship to study art at Cooper Union in New York City, where he decided to be a representational artist rather than employ the style of abstraction that was the trend in art at the time. After graduation he received a scholarship for summer study at the Skowhegan School of Painting and Sculpture in Maine, where he began painting outdoors under the open sky. He later said that this practice gave him “a reason to devote [his] life to painting.” Throughout his career he has painted scenes of Maine and of Central Park and Madison Square Park in New York City, emphasizing the light and atmosphere of a specific time of day. He has said he destroyed a thousand paintings during his first ten years as a painter while developing his style. He is particularly known for painting more than 250 realistic portraits of his wife, Ada, who is considered his “muse.”

During his long career, Katz has incorporated many influences into his art approach. The power of television to “push ads into your room,” as well as the impact of large billboards and movies, influenced him to utilize elements such as shallow pictorial spaces with flat blocks of color, close-ups and cropping of faces, and simplified scenes on large canvases—all of which have aided him in pursuit of his goal to capture “quick things passing.” His works appear calm, rather than full of emotions. About transitioning to using large canvases, he has said, “There was no figurative painting with that kind of scale and muscle,” he told me. “The field was wide open, and I just stepped in.” He has never wanted to create narratives; rather he considers his works “reductive” in that they contain a minimal number of parts to convey a whole idea. Alex Katz’s work has been the subject of more than 200 solo exhibitions and nearly 500 group exhibitions throughout the United States and other countries.