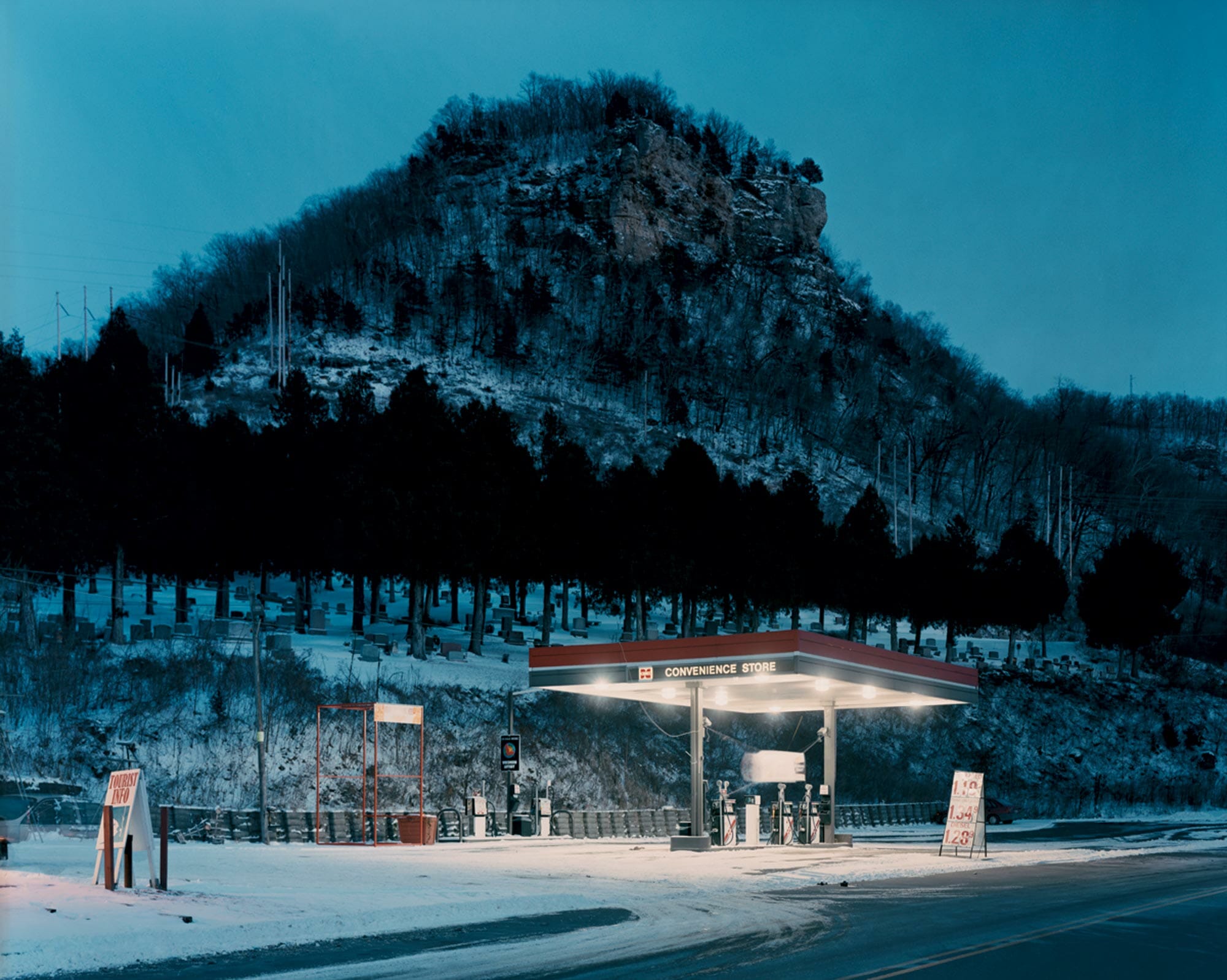 Gas pumps at a roadside convenience store sit idle below rows of headstones in a quiet cemetery. Lights from a canopy over the pump island illuminate a snow-dusted driveway on which a few cars have left tracks. The store isn’t visible, but signs announce gas prices and available tourist information, and another indicates that Wisconsin Lottery tickets are sold here. A pattern of parallel horizontal lines is shaped by the silhouettes of pine boughs against snow and telephone wires strung across the landscape, and is intersected by the vertical tree trunks, gravestones, and metal canopy supports. Thrusting up behind and hovering over the scene is a distinctive rock outcropping before the night sky. The unusual absence of human activity at the pumps is countered by the presence of graves in the cemetery, where the towering trees echo the demeanor of the standing stones. The photographer’s choice of a moment at an ordinary location brings surprising attention to the mundane or everyday, and also to the ways that lines, shapes, colors, and textures, as well as subject matter, combine to convey mood and meaning. He has chosen a scene that offers many possible stories.

Alec Soth pursues a roving tradition established by such photographers as Robert Frank and William Eggleston who took to the American road, documenting everyday subjects. For three years Soth made a series of road trips from Minnesota to Louisiana, taking large-format color photographs of people, landscapes and interiors along the Mississippi River. Published in a book called Sleeping by the Mississippi, the book’s 46 images convey a narrative about America not unlike the personal documentary images captured in Robert Frank’s classic, The Americans. Soth has said, “In the early development of my work, I knew how to take pictures, but the struggle was how to organize pictures. Eventually, I started this thing called From Here to There, which was one picture leading to the next so that it was like a sort of game I was playing photographically, where the detail of one photograph actually provides the link for the subject matter of the next image.” Soth cites the ideas of musician John Cage about indeterminacy and the effect of chance events on composition as an important influence on his photography practice. He is interested in photographing what is new to him; he follows his curiosity, using his solitary wanderings to spot people and places he knows will be the right subjects.

Working primarily with a labor-intensive 8 x 10-inch field camera, Soth sets himself up under the dark cloth he must place over his head to load the film and adjust the exposure. This process results in a contemplative photographic style and elicits remarkable detail and clarity. Soth’s images are large. He prints them on an old enlarger he bought on Ebay and mounts them on archival foamcore and then frames them. When viewed together his photographs present an unconventional portrait of America, and they ask the viewer to muse on and fill in the stories behind the images. “I am a photographer who floats over the surface of the world. I float, I wander. I have brief but occasionally powerful encounters…Photography is a very sensual pleasure…I look for color and shape like a painter.”

Born in 1969 and raised in Minnesota, Alec Soth attended Sarah Lawrence College. He has received fellowships from the McKnight Foundation and Jerome Foundation, was the recipient of the 2003 Santa Fe prize for Photography, and was short-listed for the prestigious Deutsche Borse Photography Prize. Soth also makes journalistic photographs such as those that have been on the cover of the New York Times Magazine, but his journalistic work is separate from his art photography, in which he chooses the subject and uses different art methods. He teaches at the Minneapolis College of Art and Design.

Museum of Modern Art, on photography