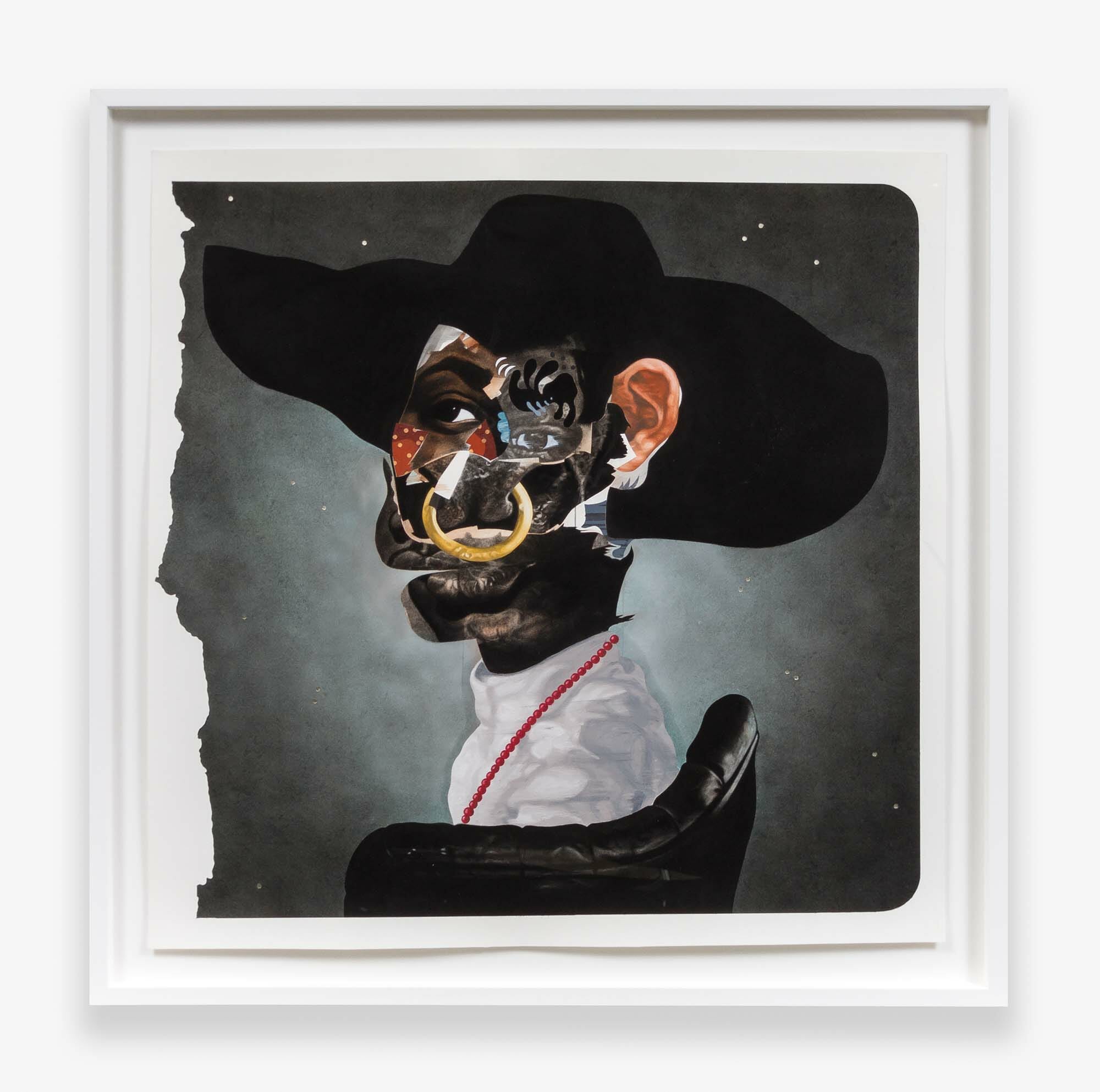 In this portrait a man’s black hat, white shirt, and red beads draw our attention toward his multipart face in the center of the image. Painted as if it were a collage of cut-up photographs, the face is a mixture of human and animal parts. Its bull’s nose, with a gold ring in its septum, is turned toward us. One dark brown eye under a prominent arched eyebrow gazes into the distance. The other eye, which looks like a gorilla’s, is lower and more faded, under a dark tentacle-shaped eyebrow. The lips are bulbous and veined and the ear is large and light-skinned. Colored strips of orange and white look like remnants of bandages or masks. The man is seated on a black leather chair in a dark space surrounded by an aura of light, with silver dots like stars in the distance.

Even though Junebug appears to be turning toward us, the arrangement of his facial features suggests other perspectives. For example, the ear may be jutting out sideways or flat against the head; one eye looks up to the left corner of the image and the other toward the viewer; the nose and mouth are turned toward us in the center of the image. However, if the face were viewed as a profile, facing in the direction Junebug is seated, his mouth looks as if it is partially open with his chin dropping down. By inviting observation of the man’s head from more than one viewpoint, Quinn helps us understand that a person can only be known as a sum of parts, and that not everything can be perceived in one glance. He has said, “I believe in life you are an amalgam of numerous experiences. You are built from a history of joy, sadness, ups, and down. I’m trying to articulate the essence of that.”

Junebug contains echoes of 17th century Dutch portraiture, early 20th century Cubism, and the abstract forms of Henri Matisse. And, resonating with artist Romare Bearden’s torn paper collage paintings, Junebug looks like a collage of torn paper images but is actually a carefully rendered painting made from charcoal, gouache, and pastel. Nathaniel Mary Quinn has built on his knowledge of Western art styles and subjects, as well as popular comics, to express on paper his unique visions of people he has known.

When he was a child, Nathaniel Mary Quinn’s mother let him draw on their apartment walls. “She would just clean the walls and let me draw again, repeatedly.” He developed his drawing skill by copying comic books, and kids in his neighborhood thought of him as an artist and challenged him to “art duels.” Quinn was the youngest of five sons in a family that lived in Chicago’s dangerous Robert Taylor Homes public housing, and his mother arranged that he participate in a gymnastics group to avoid being drawn into risk-taking peer groups. He became very good at doing back flips. At age fifteen he obtained a scholarship to a private boarding school, Culver Academies, in Indiana. He has said, “I woke up there and heard birds singing, and I knew I was in a different land altogether; I was accustomed to waking up to gunshots.” Within a month after moving to the school, Quinn’s mother had died, and his father and brothers abandoned him soon after. Teachers at the boarding school took interest in him and helped him be successful in school and to continue developing his art.

The loss of his mother was a profound experience for Quinn. In her memory, he took her name, Mary, as his middle name. He has said, “I am always painting and drawing my mother, especially being that I lost her when I was fifteen years old. Many people can relate to this.”

After finishing high school, and college at Wabash in Indiana, and graduate school at New York University, Quinn taught literacy skills to at-risk youth in the criminal justice system while beginning his art career. He eventually decided to focus his art work on his visions of “jagged, fragmented, discontinuous portraits” of people from his own experiences. He didn’t immediately know who or what his visions represented, but he would look at magazine or online photographs to find parts of pictures that could be combined to represent his visions. “So, I find the eyes and the nose and the mouth and maybe some decorative patterns and some shapes here and there.” Then he hangs the pieces of photographic images on his wall to contemplate and adjust until they look like his visions. Without doing preliminary drawings, he paints all the individual parts to create paintings that look like collage. “It’s not important to me that the works look like the person. I’m trying to paint something that’s not what you see, but how you feel. You begin to see how we are all interconnected. All the fragmented parts are a reflection of one’s own identity. We are all composed of different experiences that you have to live with. People are confronted by these grotesque, odd, disjointed entities and at the same time they are beautiful and powerful. I want to show that we are all like that.”

Quinn now lives and works in the Crown Heights neighborhood of Brooklyn, in New York City. He observes a strict studio practice: “During a period of heavy work, my daily routine is as follows: I wake up at around 7 a.m. I have a morning walk with my wife until 9 a.m. or so. I exercise, take a shower, make a cup of coffee, and meditate until around 10:30 or so. Then, I work from 10:30 a.m. until 3:00 p.m. I take a 15-minute break, then go back to work again from 3:15 to 8 p.m. Then another 15-minute break, then back to work until 1 a.m. or so. Each day is divided into three phases of working; each phase consists of five-hour working blocks. Each phase is dedicated to particular sections of the work that must be completed. If by 1 a.m. all required sections in the work are not completed, then I continue working—going as late as 4 a.m. sometimes. There is no deviation during periods of heavy work and labor. This schedule is sustained seven days a week and repeated, like clockwork, each and every day. Sometimes adjustments are made—it’s quite rare though.”

Quinn on his work

MoMA resource on identity as a theme in art

There are a variety of potential curricular connections for classroom use of this image. The following essential questions may be particularly applicable: