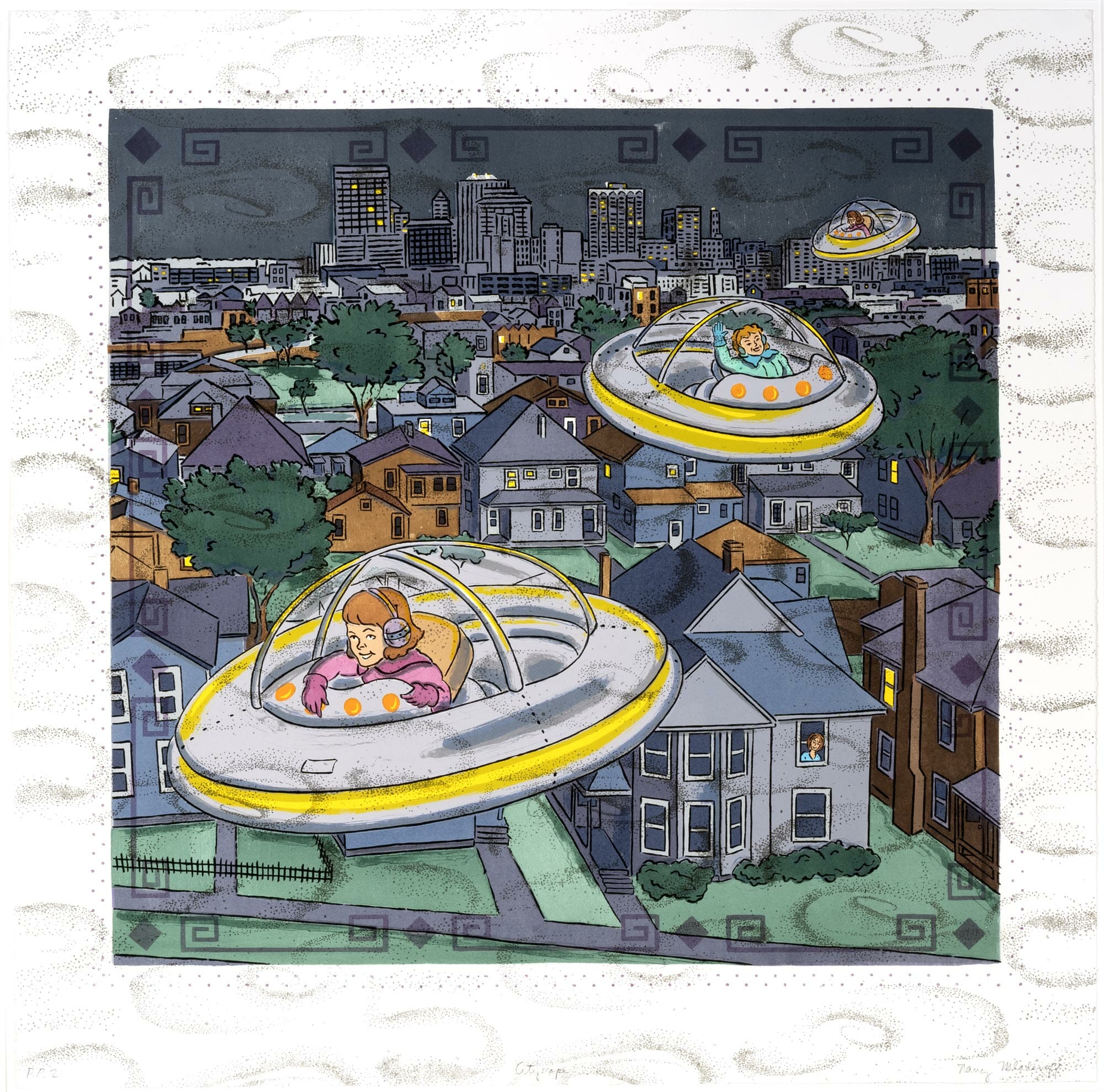 Moonlight falls on the rooftops and lawns of a suburban neighborhood, adjacent to an urban center.  Most of the residents appear to be asleep, and noisy cars and voices seem absent, although a few lighted windows suggest that some inhabitants are still awake. One girl leans out of her window to witness three shiny vehicles that have jauntily flown into town from outer space. Piloted by confidently smiling girls wearing spacesuits and headsets, the round spaceships look like the imagined “flying saucers” depicted in comic books, movies, and news reports of spaceship “sightings” during the 1950s and 60s. The girls flying these ships are capable and adventurous, enjoying their competence in navigation. They are active, not passive. They are protagonists, not supporting players in the narrative. These girls know how to manage the forces of technology and get the job done.

Swirling gold lines imply outer space atmosphere as well as imbue Cityscape with energy, echoing the rhythms and pulses of life—the turning of the earth, the cycles of aging, the changes of popular culture. Strong diagonals cross in the middle of the picture, as the line of spaceships traverses over the grid of lawns. The diagonal rooftop lines and their intersections draw attention to the leading ship and help create the illusion of space and altitude. Balance and harmony are conveyed by placement of repeating shapes, including the rooftop triangles, rectangles, and parallelograms.

The style in which the girls and houses are drawn, as well as the design of the flying saucers, echo pictures from books or movies from years past. In fact, there is a strong resemblance to images in “Dick and Jane” school books used in classrooms from the 1930s until the 1960s. In these books and many other storybooks of the time, girls were portrayed as passive, boys as active—girls as cautious, boys as adventurous. Mladenoff has created a paradoxical image, one that looks as if it had been created in the past but with images of girls piloting spaceships, which would have been counter to traditional expectations that females would stay “close to home.” The impression of something familiar from the past can evoke a mood of nostalgia, or wistful sentimentality for what was known or predictable, in contrast to the reality of continual change and evolution occurring in both societal and natural environments. These early “space explorers” would have prefigured the entrance of women into astronaut training programs and eventually into space flight expeditions in the 1980s.

Cityscape was created as part of a series of painted and printed images in which Mladenoff explored expectations for play and work activities for girls and boys. Employing the pictorial style used in popular imagery during her childhood years—in which boys took the lead in escapades—she subverted traditional story lines to present a more realistic portrait of females as active, daring participants in adventures, often with an implied sense of humor. Mladenoff has said, “The imagery of the girls flying about over the city is meant to represent a collective spirit of ‘girl power’ participating in exploring outer space—young girls as active participants, not just as passive bystanders.” In her series, she painted on commercially printed fabrics, including handkerchiefs, which depicted outer space and boys in outer space. In Cityscape she mimicked the appearance of a large handkerchief that was printed with gold atmospheric swirls and a border pattern of geometric coils called a Greek key pattern or a meander, a word derived from the ancient Maeander River of Asia Minor with its many twists and turns.

Anchor Standard 1: Generate and conceptualize artistic ideas and work
Essential Question: Why do artists follow or break from established traditions?

Anchor Standard 2: Organize and develop artistic, ideas, and work
Essential Questions: How do artists determine whether a particular direction in their work is effective?

Anchor Standard 7: Perceive and analyze artistic work
Essential Questions: How do life experiences influence the way we relate to art? Where and how do we encounter images in our world? How do images influence our views of the world?

Anchor Standard 10: Synthesize and relate knowledge and personal experiences to make art
Essential Questions: How do people contribute to awareness and understanding of their lives and the lives of their communities through art-making?

Nancy Mladenoff lives in Madison, Wisconsin, where she has been a professor of art at the University of Wisconsin until her recent retirement. Born in Wakefield, Michigan, in 1957, she grew up in Hurley, Wisconsin, where she explored the prairies and ponds, woods and fields of her small iron ore mining community. She earned a Bachelor of Science degree from the University of Wisconsin-Madison in 1982 and a Master of Fine Arts from the School of the Art Institute of Chicago in 1987. She has said, “Many people see my work as being about the environment. I accept that, but my initial reason for painting is to record something from my past. I do like my paintings to have that double edge…I want my work to be playful along with having other connotations.”

culture the customary beliefs, social forms, and material traits of a racial, religious, or social group

diverse differing from one another

focal point the place of most activity or interest

pattern recurring elements, sometimes referred to as components of a set

protagonist the main character in a book, play, television show, movie, or other narrative-driven work

style a distinctive or characteristic manner

suburban an outlying district of a city, especially a residential one

tradition an inherited pattern of thought or action; cultural continuity in social attitudes and institutions

Short profile on the artist