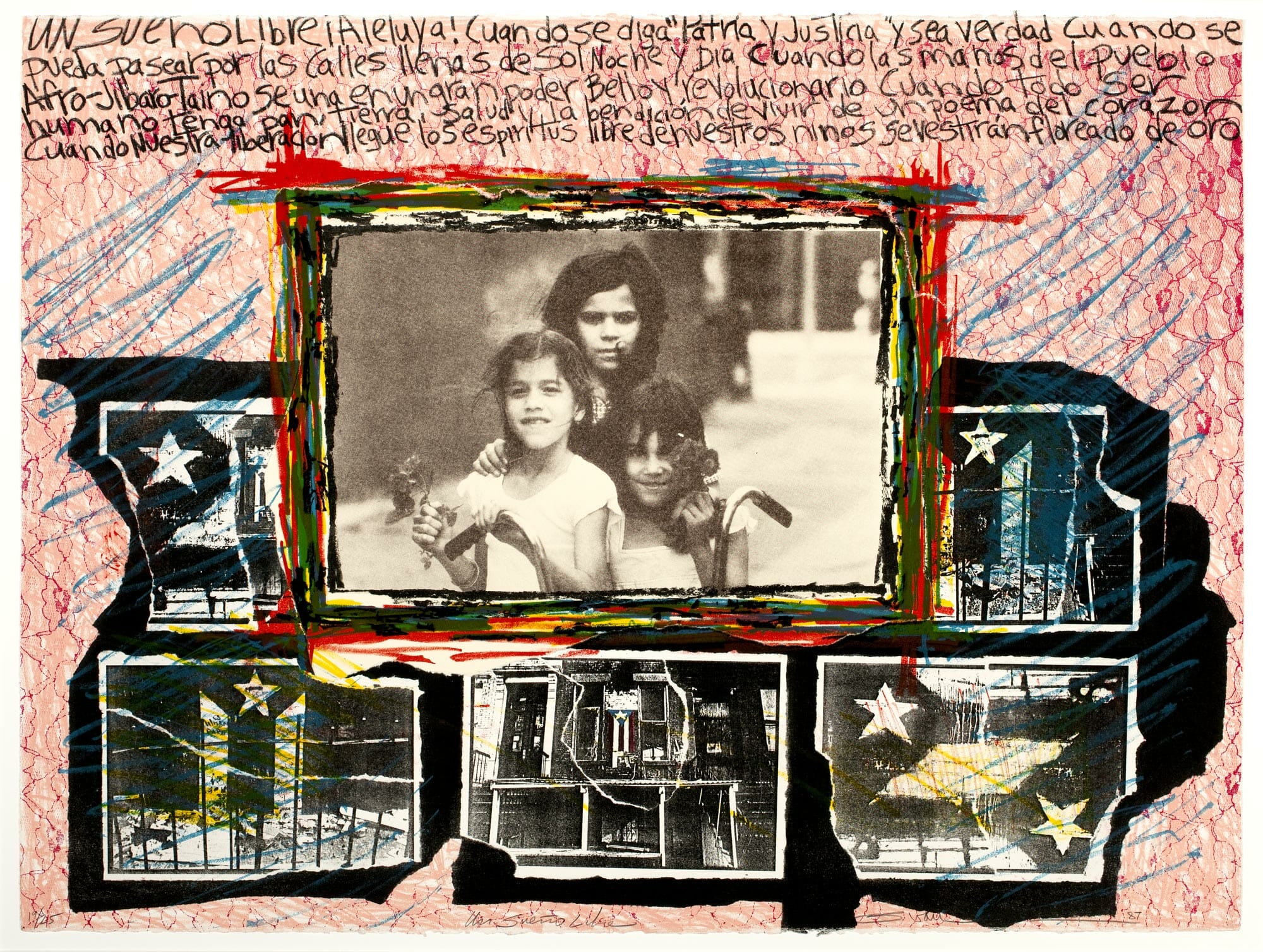 Juan Sánchez photographed this “moment in the street” when his friends’ children paused with their flowers and bicycle. The girls in front are smiling openly; the taller girl in back looks solemn and somewhat protective with her hands on the others’ shoulders. Sunlight falls on the street and the girls’ faces, highlighting their youth and vulnerability. Sánchez made a lithographic print of the photograph and then collaged it onto the center of this larger print, emphasizing the importance of the girls’ portrait by drawing red, blue, yellow, and black lines around its edges.

Five other pictures surround the central one, each containing versions of a star. A close look reveals that the star is part of the flag of Puerto Rico, seen hanging vertically between windows and doorways in the lower center photograph. The flag has a blue triangle containing the white star and connects with three red and two white stripes. Each of the other pictures is a variation of this photograph, which Sánchez took of a street mural in a Brooklyn neighborhood of New York City. He tore and pasted together segments to make new pictures, leaving evidence of white jagged tear lines. He made a lacy red background pattern by transferring the design of a lace tablecloth directly onto the photosensitive printing plate. Pink, blue, and yellow gestural marks were added as highlights.

Translated into English, the poem reads, “A boundless dream—Hallelujah! When one says ‘fatherland and justice’ and it is true; when one can walk along sun-filled streets, day and night; when the hands of Afro-Jíbaro-Taíno people are joined in one great, beautiful and revolutionary power; when all human beings have bread, land, health and the blessing of living according to their heart’s desire; when our liberation comes, the freed spirits of our children will flower with brilliance.”

Sánchez has said he composed the words in a spontaneous “stream of consciousness” because he wanted to communicate to children that they are “important and valuable and loved,” and that parents generally “are caught up in making whatever change is necessary to ensure their children’s future.” He wrote the words on tracing paper, blackened the back of the paper to transfer it to the printing plate, and then went over those marks with a lithographic crayon before ink was applied to the plate.

Juan Sánchez has made reference in his poem to the multi-cultural Afro-Jíbaro-Taíno people of Puerto Rico. The island of Puerto Rico, or “rich port,” was populated for centuries by indigenous peoples known as Taínos, who were forced into slavery and nearly eliminated by infectious diseases when Spain claimed and colonized the island. Thousands of West African Yoruba people had been enslaved to work in gold mines and sugar plantations in Puerto Rico during the sixteenth and seventeenth centuries. After four hundred years, Puerto Rico was ceded to the United States in 1898 as a result of Spain’s loss in the Spanish-American War. Jíbaros, working-class Spanish sharecroppers and agricultural tenants, came to be considered “authentic” Puerto Ricans. Intermarriage of Spanish settlers, Africans, and the indigenous Taínos resulted in mixed racial identity and culture for most Puerto Ricans. Residents of Puerto Rico are citizens of the United States.

Essential Question: How do images influence our views of the world?

Essential Questions: What is the value of engaging in the process of art criticism? How can the viewer “read” a work of art as text?

Essential Questions: How does making art attune people to their surroundings? How do people contribute to awareness and understanding of their lives and the lives of their communities through art-making?

Juan Sánchez has said, “I am one of millions of Puerto Ricans not born on Caribbean soil. Colonialism and poverty in Puerto Rico forced my parents to migrate to the United States, so that colonialism dictated the paradoxical status of making me North American born. Born and still living in Brooklyn, New York, I grew up to be an ethnically, socially, and politically conscious Puerto Rican.” Sánchez’ parents, Puerto Ricans of African descent, had emigrated to New York in search of better economic conditions. As a young boy, Sánchez was encouraged by his parents to pursue art. They were artists themselves who made popular religious artifacts. He first studied commercial art at the High School of Art and Design in Manhattan, and then entered the Cooper Union School of Art to study painting. He earned a Master of Fine Arts degree from the Mason Gross School of the Arts at Rutgers University. He resides in New York City, which has long been home to a large number of people from Puerto Rico in what are called “New Yorican” (or “NuYorican”) neighborhoods or barrios, and he has frequently expressed his support for modern-day independentistas who continue to raise the question of Puerto Rican statehood. He is a member of the Master of Fine Arts faculty of the Department of Art at Hunter College in New York City.

Sánchez has long made art that represents his Puerto Rican cultural identity and draws attention to the cause of Puerto Rican independence from American jurisdiction. He adapted the term “Rican/structions,” first used by salsa percussionist Ray Baretto, to refer to his combining methods as well as his ethnic references. His artworks employ symbols that refer to the island’s original Taíno culture, to the Yoruba culture of the African slaves, to the Catholic religion of the Spanish colonialists, to Puerto Rican folk art traditions, and to American and European art history. Sánchez has said that he is a “product of the multi-identity” of being raised in New York City by parents from Puerto Rico and as a result feels an affinity with many different cultures. He intends his Rican/Structions to challenge stereotypes of Puerto Ricans in the United States and to convey the importance of Puerto Rican influence on music, art, politics, and many other aspects of American society. Regarding another of his images, Sánchez has said, “The beauty of that Puerto Rican child symbolizes the never-ending struggle of a people striving for dignity and self-determination. I wish for the viewer to feel the extent of my people’s anguish as well as their prevailing joys.”

composition the structure of an image; the act of combining parts or elements to form a whole

consciousness a person’s mind and thoughts

cultural identity the self-perception of belonging to a group, related to one’s nationality, ethnicity, religion, social class, generation, locality or any kind of social group that has its own distinct culture

focal point center of activity or attention; the point at which all elements converge

indigenous produced, living, or existing naturally in a particular region or environment

Research on Puerto Rican culture in the United States (Pew)