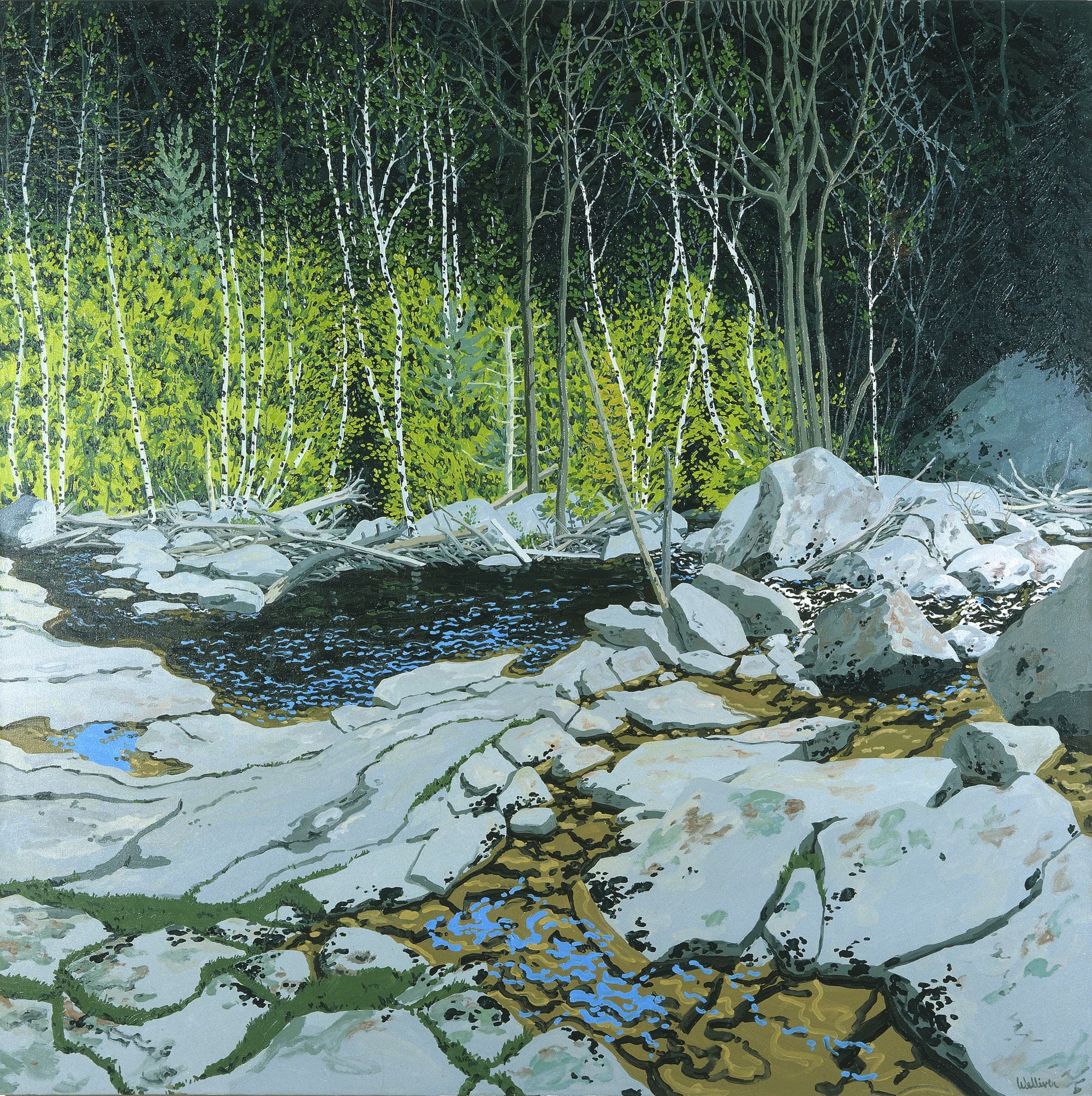 Water courses through a clearing in a lush forest of birch and evergreen trees. A bright, clear day in summer is suggested by the strong contrast between light and dark—the woods in the background are nearly black while the chartreuse-colored trees and gray rocks are illuminated as if by the strong sun of a high mountain plateau. Dappled light and pools that reflect the blue sky offer a refreshing, contemplative moment in time. The eye is drawn along the diagonal path of the stream which contrasts with the piercing verticality of the birch trees and the languid forms of rocks and boulders. The artist constructs a logical sense of depth by depicting objects in expected relationships within a foreground, middle ground, and background. The large scale of Neil Welliver’s Prospect Stream, fully eight feet high and wide, immerses the viewer in the scene and recalls the heroic grandeur of 19th-century landscape painting.

Still, are we on sure footing here? Can we imagine ourselves walking along this stream or into the woods? Despite Prospect Stream’s traditional subject—the landscape—the painting’s style is of the moment. In his paintings Neil Welliver altered, exaggerated, simplified, and stylized nature to convey its intangible and changing essence. To capture the ephemeral qualities and transparency of light, he avoided colors that were purely descriptive; he chose instead deeper, darker, brighter, and more saturated colors. His manipulation of color and flattening of space upsets our expectations and equilibrium as we engage with what, for many people, would be a familiar scene. Through his style Welliver aimed to emphasize the “fact of painting.” Though the subjects are familiar, he wanted the viewer to understand that painting is an object in itself, as well as an interpretation of reality.

To create studies for his final paintings Welliver hiked into the woods looking for potential subjects. He carried a 70-pound backpack containing only eight paint colors; limiting his color palette allowed him to avoid purely naturalistic depictions of nature. He once said, “I never try to get the color I’m looking at. I never copy the color I see. NEVER.” He further explained, “To imitate nature you need a tube of air or something and I don’t have a tube of air, so I found something that makes it look like there’s air in the color.” To make the final painting from his studies he would first create a simple line drawing of the scene on a large sheet of paper. After perforating the drawn lines with a serrated wheel he would staple the image to the canvas, then lightly drop a bag of charcoal dust over the perforations to transfer his drawing to the canvas. He then applied paint to the canvas, working from top to bottom until the composition was complete, never altering the painting after it was finished.

Neil Welliver was born in 1929 in Millville, Pennsylvania. He earned a Bachelor of Fine Arts degree from the Philadelphia Museum College of Art in 1953 and a Master of Fine Arts degree at Yale University in 1955. His first teaching position was a studio instructor at Cooper Union in New York City. He later taught for ten years at Yale. His final and long-lasting academic appointment was at the University of Pennsylvania in Philadelphia, where he taught from 1966 to 1989.

Welliver felt a strong connection to the places he depicted in his paintings. Concerned with land use and self-sufficiency, he sought to be a responsible steward to the more than 1600 acres that he eventually acquired. In 1979 Welliver purchased a farmhouse in Lincolnville, Maine and for many years commuted from there to teach in Philadelphia. But, his art focused on the woods of Maine, and that is where he spent most of this time. “For me,” he said, “these places are often nondescript corners, small things, not the big 19th-century vistas of the Hudson River School. I can’t put their meaning in words, but I try to do it in paint.”

Welliver was not concerned about the distinction between realism and abstraction because he saw himself as an artist who could bridge the gap between these styles. Though he did not like associations with specific schools of art, he found inspiration in artists like Piet Mondrian and Joseph Albers; Mondrian, for his efforts to express the essential beauty of the real world “with utmost awareness,” and Albers, for his teachings about perception, color optics, and color interactions. Neil Welliver is well known for his contributions to contemporary landscape painting as well as his reverence for his subject matter—he lived and breathed the natural beauty he depicted. He said “if you give yourself to a place, you begin to feel its power.” Neil Welliver’s land stewardship continued upon his death of a heart attack in April, 2005, with his bequest of 700 acres to Maine’s Coastal Mountains Land Trust.