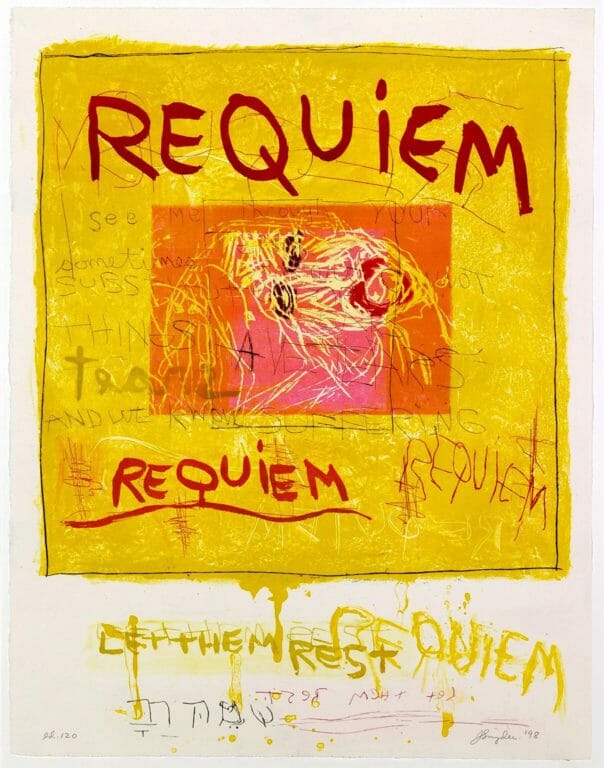 Requiem/Let Them Rest by Joan Snyder is an arresting mix of color and text. If a person were to walk by this image tagged on a wall full of graffiti, the jarring hues and the blaring word Requiem might call for a closer look. The big yellow square framed in black lines, with its pink center and red letters, stands out from the larger white background. Closer looking reveals other words that look as if they were hurriedly scratched onto the yellow background. Little by little they can be pieced together, discovering a poem or an elegy. They say,

Along the bottom, written in what looks like both pen and paint, both forward and backwards, is the injunction

What is this mysterious message? To what does the word requiem refer? “Requiem” was originally a Latin word, meaning “rest,” and was used to describe a church funeral service before a burial or a service of remembering a person who had died. Eventually musical composers began to write music for these services, and several major composers are associated with requiems, including Brahms, Mozart, and Verdi. Their music has become a part of more widespread musical performance and appreciation outside of church liturgy, and many people are familiar with their Requiems.

It’s not clear to whom the word “Requiem” refers. There seems to be one voice in “See me through your TEARS.” There seem to be more voices represented in the line, “And we know suffering.” And then there is the line, “Let them rest.” Who, or what, are these others? Who is speaking? The artist, the departed ones, a group of victims of certain harms, the artwork itself? Are there some other possibilities?

Might the artist have been thinking of a gravestone? Certainly there are often plaintive messages carved into headstones in cemeteries that aim to voice the “thoughts” of the dead for the contemplation of the living. The words and the shape of the artwork suggest this connection. There is a pinkish rectangle in the center of the yellow square. It looks as if the pink ink was laid down first in the process of printing the paper, because there is yellow ink over the outer edges of the rectangle, changing its pink color to a murkier rose. And there is a pure pink square in the middle, containing a couple of mysterious shapes. Both shapes appear to be faces, the one on the right turned on its side and distinguished by purplish eyes and open-mouthed, red-lined lips. The other has eyes but is less defined and might also be a simple line drawing of a figure leaning forward at the waist. Sketchy white lines might be tear streaks. Here and there on the yellow square are little groups of parallel lines with tornado-like squiggles surrounding them.

But the distinctive characteristic of this image is its colors. They aren’t sad or somber. They are sharp, lively, slightly garish. They seem to represent their time, the end of the twentieth century, with its clashing of ideas, cultures, and technologies. They seem to reach out to shake the viewer. Another art form that does the same thing is popular music, and this image looks a lot like a cover for a rock music album, especially a record album from the punk rock period a couple decades ago.

The hand of the artist, Joan Snyder, is very evident in this image. She didn’t try to make it elegant and tightly controlled. She used her own loose handwriting to scrawl the words, she let the colored ink run loosely on the printing plate, she made little doodles around the edges like people do when they are sketching their ideas, and she revealed that she had to write backwards on the printing plates to make her words recognizable (she included words she had written the normal way, which appear backwards in the print).

Joan Snyder has described the way she works: “The process of making images is always going on on several layers at once, and I know it is important for me to keep scribbling because in a few years those will be the ideas ready to become paintings.” We might wonder whether this image is a sketch for an eventual painting, but Snyder took great care to create this five-color print as an original artwork in itself.

Artists frequently express feelings such as loss or anxiety or uncertainty through their artworks. Like the musical requiems, art can be expressive and symbolic of the personal challenges of artists and their acquaintances. They often respond to societal crises, such as war, plagues like AIDS, or ethnic and racial confrontations with poignant and incisive artworks. Joan Snyder’s work expresses what she views as anxiety arising from conflict among individuals and social groups. She is known to be a feminist artist, an artist who expresses her concerns about discrimination against women generally in the larger society and particularly in the art world. Much of her work contains references to violence and pain, as well as love and happiness, and she explores the common threads among people’s emotional experiences.

Joan Snyder was born in 1960 in Highland Park, New Jersey, and lives and works in Brooklyn and Woodstock, New York. She graduated from Douglass College in New Brunswick, New Jersey, with a Bachelor of Arts degree in sociology, a field that examines the forces and structures of society that have long engaged Snyder’s imagination. She earned a Master of Fine Arts degree from Rutgers University in 1966. She emerged as an artist during the activist feminist period of the 1960s and 1970s. She has said, “In the late ’60s women had begun to talk, meet and organize. We were not being recognized or taken seriously, no matter the type or style of artwork we were attempting at the time. I remember calling male painters ‘the boys’, and I did that for years, because women were excluded from any dialogue at the time. Perhaps this is what allowed me to go my own way, to discover my own language, and to work so independently, just because I felt so excluded.”

Joan Snyder takes personal experiences and emotions and makes connections to universal issues. In this print she started with expressing her anguish about the loss of a friend to AIDS but she translated it into a more general statement about loss and a hope for peace for others. In 2007 Snyder was selected as a Fellow of the MacArthur Foundation, which awards five-year, unrestricted fellowships to individuals who show exceptional merit and promise of continued creative work.

Timeline of HIV/AIDS in the United States

Smithsonian article on the United States’ response to the AIDS epidemic

NYTimes article on the new AIDS museum in San Francisco