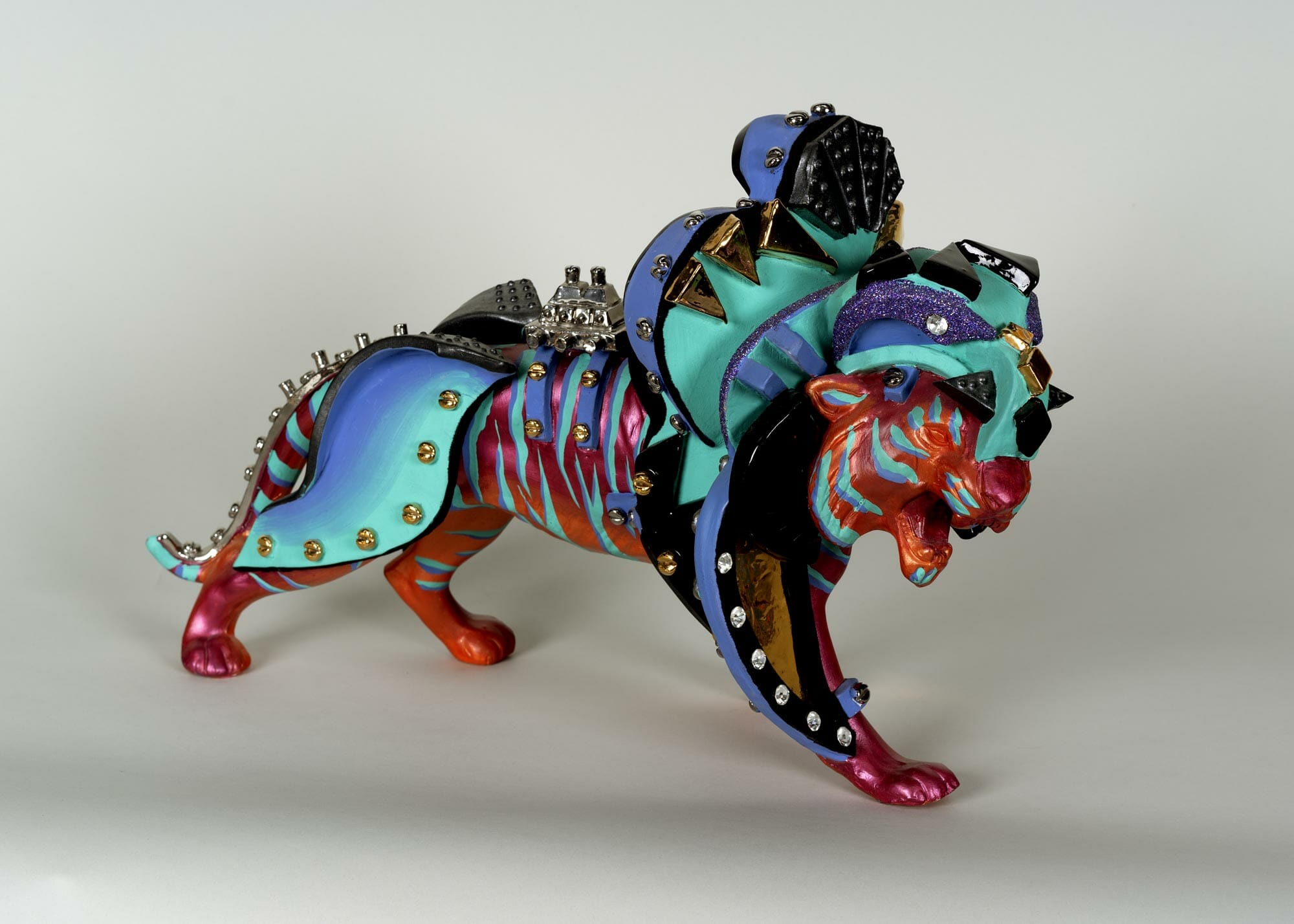 A tangerine colored tiger strides forward, its mouth open in a roar, baring its teeth. Its stripes and the body armor covering its legs and shoulders are turquoise, shaded with blue. Glitter highlights a tall headdress decorated with rhinestones, gold triangles, sliver studs, and a black crest. In place of a saddle is a silver mechanism that looks like a power-source with silver pistons. A blue band surrounds the tiger’s right front leg and fourteen shiny studs line the length of the tail. Geometric shapes abound, including many triangles, crescents, and circles.

This Tangerine Rainbow tiger obviously has super-cat powers, evidenced by its headgear and leg plates, as well as the apparatus it carries on its back. Its bionic nature, in which power is derived by combining life forces with electromechanical technology, surely gives this tiger optimal capacity and efficiency for running and pouncing. The shiny, colorful armor on its sleek body gives notice that it is remarkable and extraordinary. This animal is a star.

A tiger in nature already has amazing qualities and doesn’t need any accoutrements to make it a superstar. It is the largest of the cat species; it can make short distance runs of between thirty and forty miles per hour; and it can leap horizontally as much as thirty-three feet, flying through the air with its tail rigid like the tail fin on an airplane to stabilize its hindquarters. It has exceptional hearing, and night vision that is six times as powerful as that of humans. Its unique striped appearance, particular to each tiger, helps it conceal itself in the dappled light and vegetation of the forest while it stalks and surprises its prey. There is little in nature’s animal world that a tiger cannot dominate.

The appearance of this fanciful cat plays on the inherent ability of a tiger to hide and blend in. Here it is calling attention to itself. This tiger’s intrinsic force is dominated by embellishments and trimmings. The emphasis is on color and decoration as indicators of power to meet whatever challenges the tiger may encounter. In this way the tiger may be considered metaphorically in relation to human preoccupation with clothes and body decoration, which enable people to enhance their natural characteristics and “hide in plain sight” as they negotiate the demands of social forces.

The mechanism on this tiger’s back also may indicate that the tiger is being monitored by scientists wanting to learn about its activity and adaptations to the environment, Tigers are endangered animals due to illegal hunting for their pelts and for body parts to be used in folk medicines, and to loss of their natural habitat from logging and forest destruction. Scientists have adopted a variety of approaches to monitoring tiger behavior so they can improve conservation strategies. GPS tracking collars have been used in some cases, but sophisticated computer hackers have attempted to steal the data about the animals’ movement in order to find and capture the animals for profit.

Powerful animals have often been regarded by people and depicted in art as guardian beasts, such as the lions at entrances of buildings like the Art Institute of Chicago and the New York Public Library, or on cemetery monuments and tombs, where they suggest a role as guides to the next world. This cat evokes animals that are depicted in comics and adventure movies from popular culture; for example, the “Battle Cat” figure of the Masters of the Universe and He-Man television series of the 1980s in which a scared pet cat is transformed into a powerful, armored mount for a prince who gains superpowers.

Anchor Standard 2: Organize and develop artistic, ideas, and work
Essential Question: How do artists work? How do artists create works of art that effectively communicate?

Toby Buonagurio grew up in the Bronx borough of New York City and attended City College of New York, where she earned a Bachelor of Art degree in 1969 and a Master of Art and Education degree in 1971. She sculpts brightly colored, flamboyant, tongue-in-cheek ceramic objects that are inspired by popular culture. She is best known for her rhinestoned and glittered ceramic “hybrids.” A permanent installation in New York City at the 42nd Street Times Square subway station, titled Times Square Times: 35 Times, was commissioned from Buonagurio by the Metropolitan Transportation Authority Arts and Design program. It is made up of thirty-five unique, glazed ceramic relief sculptures embedded in a glass brick wall. Buonagurio resides in New York City and teaches art at the State University of New York at Stony Brook, where she is head of the ceramic sculpture program.

For her series of ceramic tigers, Buonagurio gave each animal a unique personality by using distinctive paint colors and sheens; she contrasted the bright body color with matt colors for the stripes. She cast the body and hand constructed the pieces of armor, firing the object three times for the glazes and the gold and silver metallic lusters. She then painted, glittered, and flocked the sculpture, adding rhinestones to emphasize the reflective surfaces. She says that she has always been fascinated by light, reflection, and the illusory nature of rainbows. Buonagurio currently makes “fembots,” or sculptures of bionic females using her own cast upper torso in sculptures that are almost four feet tall.

Toby Buonagurio has said, “I always retain some aspects of the source images so everyone can recognize them. Then I make changes. What is small I make large and what is large I make small. I also crop, distort and invent among many other processes. The combination of the familiar and unfamiliar is of interest to me and hopefully to other people.” Her work both celebrates and critiques popular culture. “It plays one against the other,” she notes. “Ceramic is an important medium for me, but that’s not the first thing I want people to see. I want them to look at the art and be interested in its expressive ideas and sculptural components.”

accoutrement an identifying and often superficial characteristic or device

bionic electronic devices and mechanical parts that assist the performance of difficult, dangerous, or intricate tasks by supplementing or duplicating parts of the body; or, having superhuman strength or capacity

ceramic made of clay and hardened by heat

compound composed of or resulting from union of separate elements, ingredients, or parts

electromechanical relating to a mechanical process or device controlled electrically

endangered at risk of extinction

extraterrestrial originating, existing, or occurring outside the earth or its atmosphere

texture the feel, appearance, or consistency of a surface or a substance

transformation a thorough or dramatic change in form or appearance

Images of other ceramic works by Buonagurio

BBC radio program, “In Search of the Tiger’s Roar”