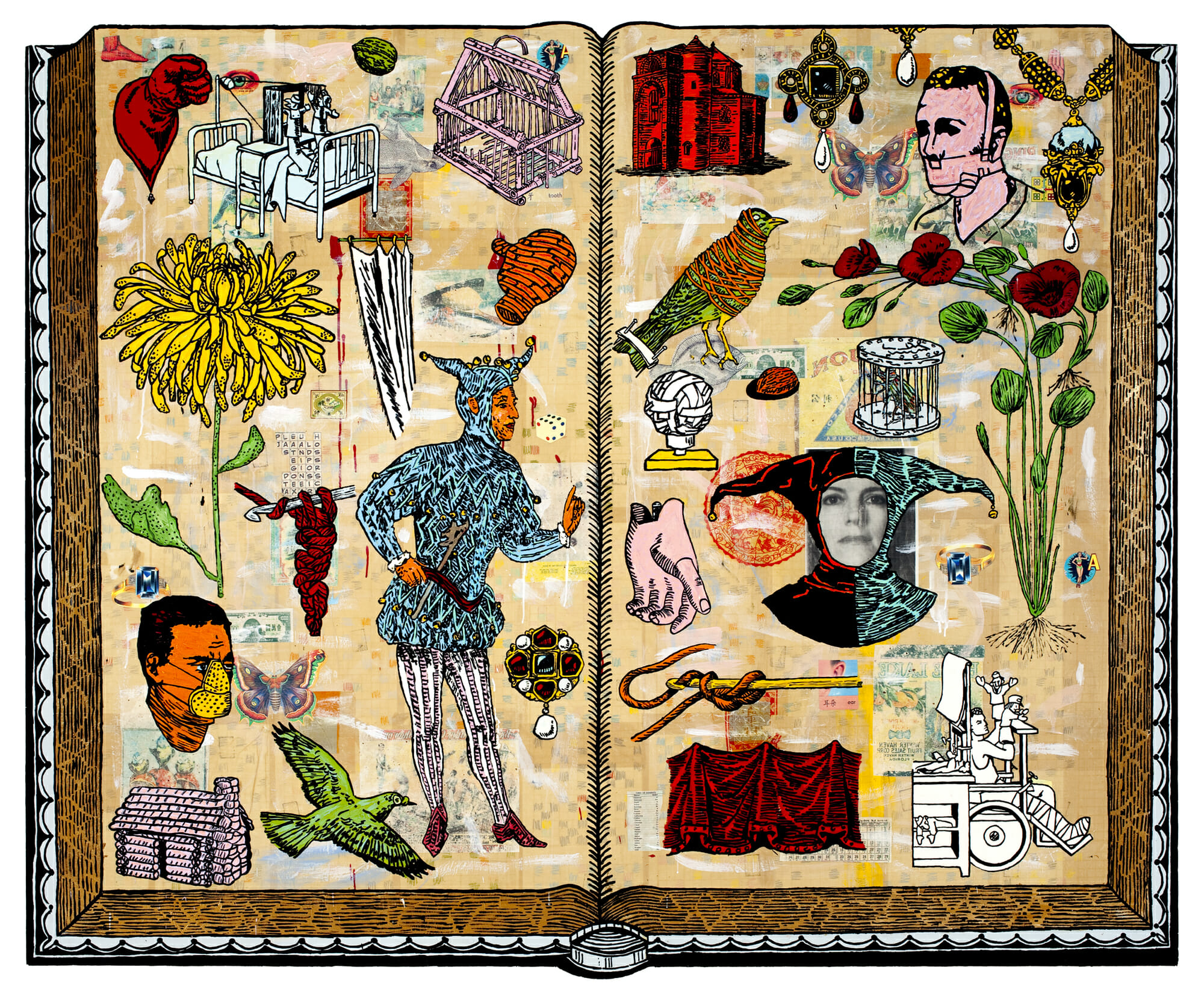 Jane Hammond’s painting Irregular Plural II inspires a complex “reading.” The canvas, shaped like an enormous book with scalloped end sheets and gilt edging, is filled with colorful images that hint at a multitude of stories. On each of the open pages is a portrait of a jester, one of which contains the black-and-white photographed face of the artist herself in the costume of a medieval prankster. Surrounding her is a strange combination of objects and people whose connections to the jester are mysterious. Sustained looking reveals correspondences between the images on the left-hand page and images on the right. Pairings based on color, appearance, or purpose begin to reveal themselves, such as, a broken cage and a cage confining a beetle, a bird flying freely and a perching bird confined with string and pins, a pair of head-like shapes wrapped with bandages, two curtains, two male heads with masks or restraints over their facial features, a pink log cabin and a red castle, two flower specimens. Other pairings include butterflies, hands, jewels, knotted ropes, and calendars. Layered beneath are crossword puzzles, produce advertisements, lists and diagrams, and paper money.

The title of the painting came from the poet John Ashbery. In 1993, Hammond thought to ask Ashbery to make a set of titles for her to use as inspirations for paintings. “I associate John with playfulness, sound things, strategies, oddball eccentric methodologies. It just clicked in my mind one morning and I decided to call and ask if he would make titles for me. And he did it: he made 44 titles.” Some of the titles Ashbery developed were Keeping the Orphan, Bread and Butter Machine, A Scratched Itch, Surrounded by Buddies, The Wonderfulness of Downtown, and Pumpkin Soup. Hammond made more than 60 paintings over eight years from those titles, sometimes using a title more than once, such as Irregular Plural, from which she made five paintings. Hammond allowed herself to meditate on the titles until ideas arose that were “sparked” by the words.

In thinking about the title, Irregular Plural, Hammond realized that it could mean something other than a grammatical phrase; “irregular plural” could mean “like something else but not an exact duplicate.” She said, “This title got me into juxtaposing versions of things: these nautical knots with those veterinarian’s sutures; this Mehndi hand with that magician’s glove. And in the process, something is said about the nature of representation and how an image can be freighted with the feeling of the culture it comes from.” (Lehman, Bomb Magazine, Fall, 2002)

She envisioned a painting that was like an open book or scrapbook, with imagery on the left side juxtaposed with a variation, or an “irregular plural,” on the right side. The imagery for the painting is derived from a large library of source material that Hammond had collected from a variety of publications since the 1980s.

Just looking at the images in Irregular Plural II is pleasurable. It is possible to simply enjoy the ways the objects are painted or collaged, or to locate their counterparts and compare their similarities and differences. It is also possible to assign meaning to and imagine narratives for each image, as well as translate each image into a word or phrase and combine these parts of speech to make sentences. Each “word” or “phrase” may stand alone, or its meaning may be influenced by the others surrounding it. The results can be poetic, non-linear, or absurd, or knit together to create a storyline. Hammond’s “vocabulary” is enigmatic, but laden with opportunity for imaginative interpretations.

Jane Hammond was born in Bridgeport, Connecticut, in 1950. She studied biology, poetry, and art history at Mt. Holyoke College and ceramics at Arizona State University. She earned a Master of Fine Arts degree in sculpture from the University of Wisconsin-Madison in 1977.

During the 1980s, Hammond amassed a collection of images photocopied from technical manuals, antique children’s books, handbooks on magic, and botanical guides. She assigned every image an arbitrary number and organized them in files according to various themes, such as subject matter, size, or color. The numbering system kept their meanings open and undetermined. (This collecting process reflected her childhood tendency to collect and chart aspects of her experience. As a girl, she had cordoned off 50-foot square grids in her yard with string and made a catalogue of all the enclosed rocks and trees in her notebooks.) During this period, Hammond also made a series of one-of-a-kind etchings that became part of her files. Out of this collecting period, she arrived at the idea of a fixed “lexicon” of 276 images that could be used “recombinatively,” uniting the images in various configurations. She was interested in limiting herself to a set of images whose differing arrangements would reveal alternative meanings, thereby creating multiple narratives.

Hammond imposed other rules on herself for her artistic practice. She would only use two sizes of canvas and six colors—red, orange, yellow, blue, black, and white. In addition, she titled all of her paintings with the same name, Untitled, along with a set of parentheses that included a string of numbers representing the images from her standard lexicon.

After Hammond began using the list of titles supplied by John Ashbury in 1993, she started to break her own rules, expanding her possible selection of colors to include every hue and shade, permitting different sizes and shapes of canvas, as in Irregular Plural II, and incorporating other materials onto the surface, such as the transfers, linoleum block and rubber-stamped prints that are collaged onto this canvas. She also expanded her lexicon to include many different versions of the original 276 objects.

Whenever Jane Hammond starts a painting she has an almost complete idea in her mind of how it will look. “I really trust when the idea comes to me as a fully formed thing, and it’s in my mind, and it starts demanding to be made, like a kid demanding to be fed. I don’t critique it. I just assume that it comes from a very rich place. That place isn’t me; I am just the medium.”

Jane Hammond on her collaboration with John Ashbery

Jane Hammond on her use of collage

Jane Hammond on snapshots as a source of inspiration