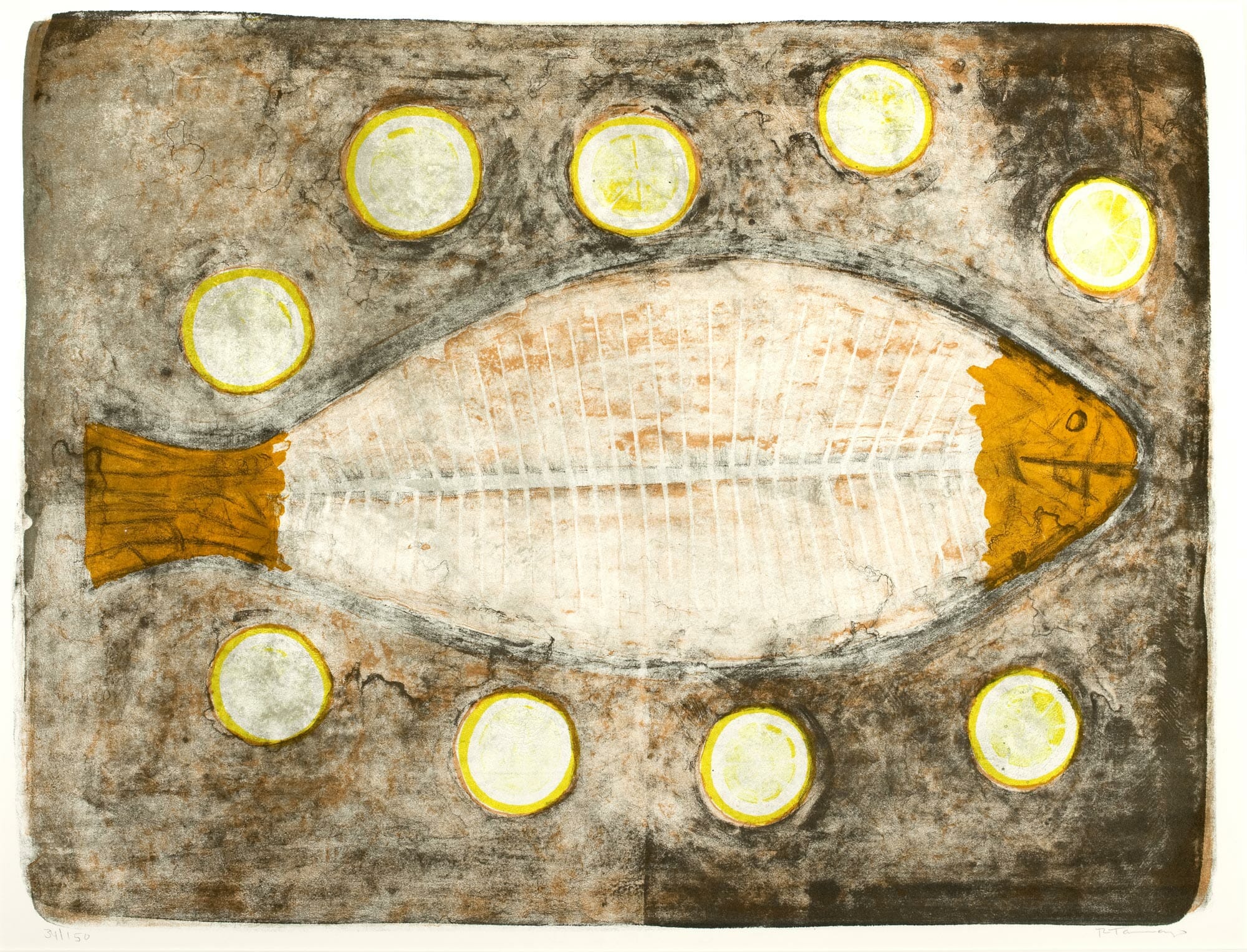 An ordinary meal of fish, offered with lemons for their citrus seasoning, takes on significance and dream-like mystery in this lithographic print by Rufino Tamayo, an artist also known for his murals and paintings. The filleted flounder and nine lemon slices are depicted directly, with no platter or plate serving as a background or to orient perspective. Tamayo employed simple geometric shapes that not only evoked traditional folk motifs of his Mexican culture but also enabled him to experiment with the limits and possibilities of the picture plane. The flat form of the fish is an ideal subject for his Modernist attention to the flat print surface and is as well a subject that is related to daily life, with its celebrations and sacraments.

After Tamayo drew his image on a limestone block with a soft lithographic crayon, thin veils of orange, black, white, and yellow inks were applied and printed successively onto the paper in transparent layers. The colors combine to convey textures, including the bones and skin of the fish, the rind and membranes of the lemons, and the mottled stone or marble of what might be a tabletop or other supporting surface. Tamayo used the colors of the Mexican landscape and of pre-Columbian artifacts to imbue his art with his culture’s traditional spiritual expressiveness. He often said that the metaphysics of his ancient forebears were such a deep part of him that they became an automatic framework for all of his images. The astronomical discoveries of those ancient peoples may be encoded in this image of lemons circling the halved fish like planets in a solar system circling a central star. Contemplation of the ambiguous space behind the objects invites speculation about these mysterious depths.

Rufino Tamayo was twelve years old when he arrived in Mexico City to live with relatives after his parents had died. He had been born in 1899 in Oaxaca, traditional home of indigenous Zapotec families from whom his father was descended. He had been surrounded there by sights of their colorful dress and ancient crafts. In Mexico City he lived in the picturesque neighborhood of La Merced, with its traditional open-air market full of fruits, vegetables, spices, and flowers. After high school he began training for a career as an artist by briefly attending the Academy of San Carlos and working as a helper to artist Roberto Montenegro, who was decorating a church. In 1921, at the age of twenty-two, he was appointed head of the Department of Ethnographic Drawing at the Museo Nacional de Arqueología in Mexico City, where his duties included drawing pre-Columbian objects in the museum’s collection. In 1927 he traveled to New York and exhibited his watercolor still-lifes and portraits of Mexican men and women, which incorporated the forms and slate tones of pre-Columbian ceramics. He lived for many years in New York and Paris and was influenced by the surrealism and expressionism of European Modernism. In 1964 Tamayo returned to Mexico City and lived there until his death in 1991. The Museo Rufino Tamayo, designed by the artist, was established in Mexico City’s Chapultepec Park to exhibit his extensive collection of international twentieth century art as well as to hold temporary exhibitions of contemporary art. In the city of Oaxaca, Tamayo founded a museum in his name that exhibits his collections of pre-Columbian artifacts.

From Exile to Idol: Rufino Tamayo at 91

The Many Fish Symbol