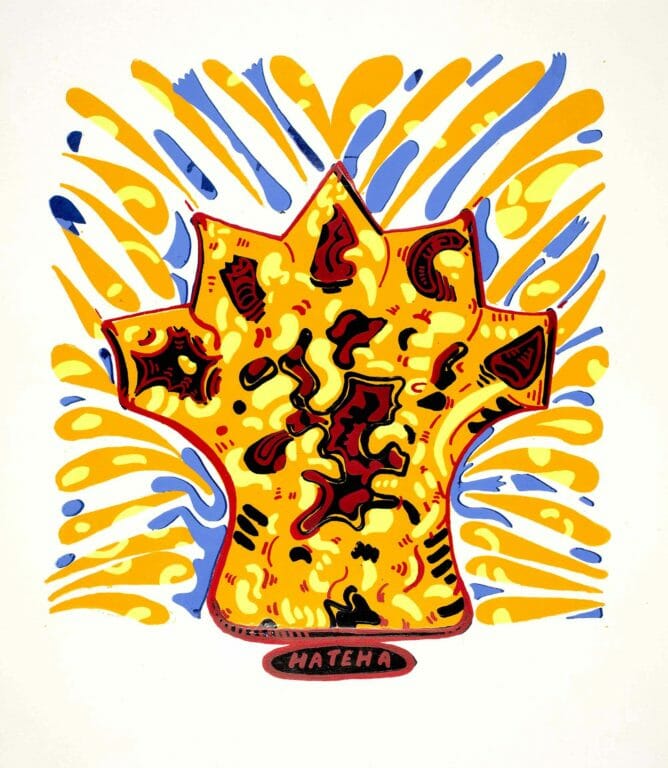 Thick swathes of blue, orange, yellow, red, and black burst forth in James Falconer’s Hateha. Streaks of orange with yellow highlights and blue with thin black outlines explode like fireworks from behind the unfamiliar central shape. Inside its red outline, this shape vibrates with activity. Five pointed at the top, with a wide, trunk-like base, this mysterious object is alive with color contrasts and the tension between its many organic, undefined components.

The imagery here does not extend to the paper’s edges, leaving white space that defines the image as much as the colored ink. By placing the exploding blue and orange shapes against a white background, the artist emphasizes the purity of the colors, as well as their clearly delineated, organic forms.

Although the Chicago Imagists are primarily known for their unique approaches to figurative art, Hateha might seem at first to be non-representational. In fact, the work interprets an image derived from film history. Falconer has said that the central shape outlined in red represents the back of a clenched fist, with the five points forming knuckles. The image refers to the 1955 film, Night of the Hunter, based on the novel by Davis Grubb and starring Robert Mitchum as the sociopathic, itinerant preacher, Reverend Harry Powell. One of the signature images from the film are the letters “L-O-V-E” and “H-A-T-E” tattooed on Powell’s hands.

The title of the print, Hateha, is a combination of the words “hate” and “ha.” In Falconer’s words, it “…is a dismissal of HATE by HA, to break a triumph of a kind of evil;” specifically, in the artist’s mind, the evil taking place during the Vietnam War. According to Falconer, Hateha was part of a group of six works of art created to help fund a Hairy Who exhibition. He undertook the printing process while he was a graduate assistant at the School of the Art Institute of Chicago (SAIC), working with his instructor Sonja Landy Sheridan.

James “Jim” Falconer was born in 1943 in the suburbs of Chicago. He studied at the School of the Art Institute of Chicago (SAIC), where he encountered the other student artists who formed the Hairy Who and, later, became known as the Chicago Imagists. Falconer participated in Hairy Who exhibitions at the Hyde Park Art Center in 1966 and 1968 as well as in an exhibition at the Corcoran Gallery of Art in Washington, DC in 1969 featuring art by the Hairy Who. Also at this time, he became involved in anti-war efforts, co-founding the Chicago branch of Artists Against the Vietnam War.

Falconer moved to New York City soon after, where he worked in various media, including film, photography, and painting and built a career as an acoustical consultant for recording studios. He returned to Chicago in the early 2000s, where he continues to reside and exhibit his work.

MoMA What is a Print? resource