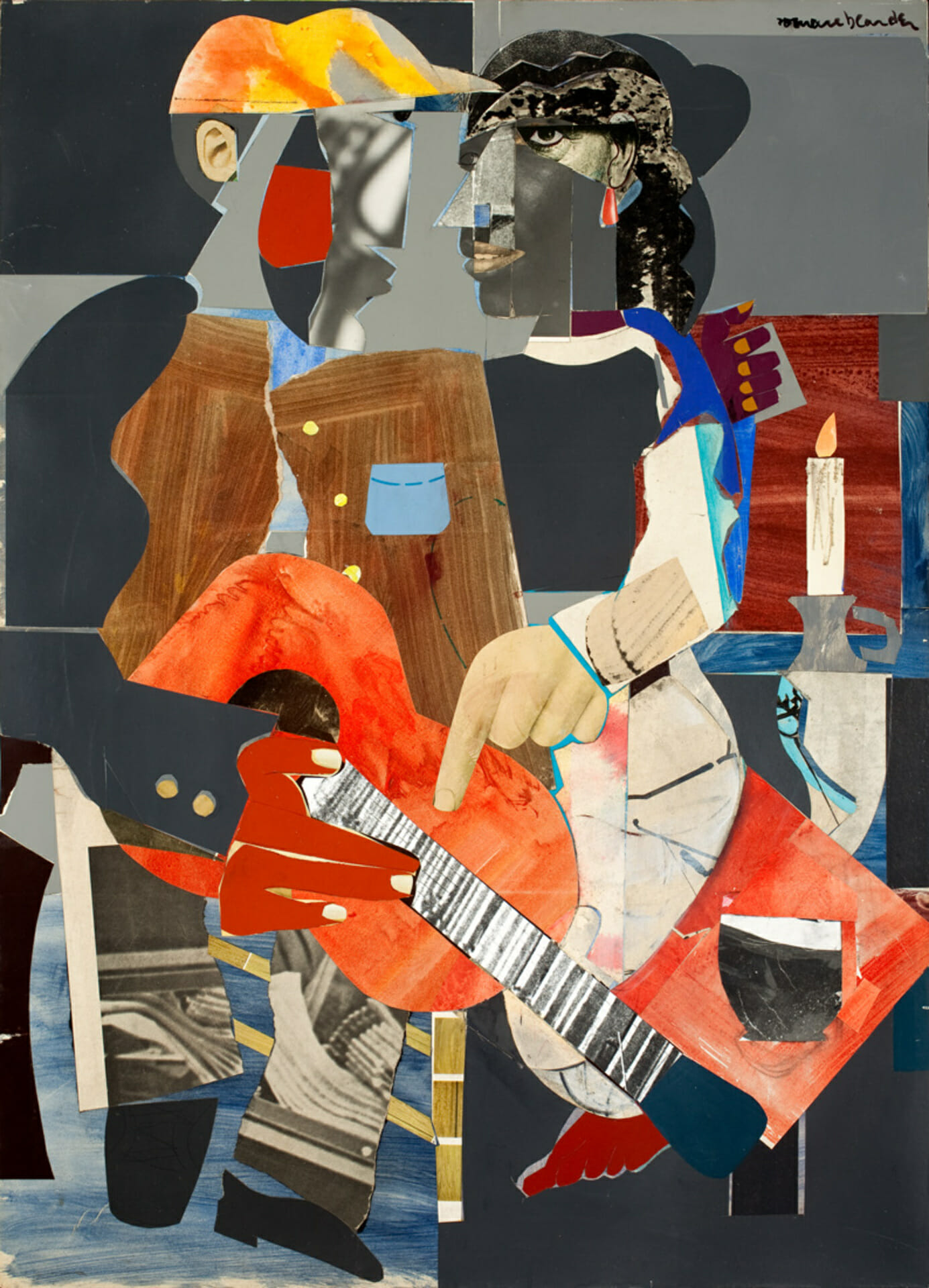 Serenade depicts an intimate moment between two people. They face each other and gaze into one another’s eyes. Their hands come together on the guitar. Their bodies merge. The candle and cup tell us something about the occasion. The man’s city cap and the woman’s bare foot give us hints about their identity. Serenade is made with colored papers and parts of photographs cut out and pasted together. The collage technique Romare Bearden uses allows him to compress space, time, and sound into one image. While collage is a very modern way to make a picture, the subject of Serenade, a man and woman drawn together by music, is as old as art itself.

Bearden drew on African and Christian symbolism, art history, and musical references to construct Serenade. The ritual sharing of food and drink is part of the social fabric of all cultures. The candle illuminates both the real world and the intangible world of spirit and memory. The expressive power of music draws people together. It gave a “voice” to African slaves in the nineteenth century. It was a link between people in the rural south and industrial cities of the north in the twentieth century.  As an African-American, Bearden felt his art should reﬂect the experiences of Black people. He drew on contemporary life, music, and classical literature for subject matter, but he was always looking through the lens of Black culture. Like the griots in West Africa who preserved the oral history of their community, he was preserving the history of his own community in America.

Bearden would begin a collage with rectangles of colored paper, which he moved until he created an abstract pattern that he liked. Using a combination of rectangles in upright and tilted positions, Bearden’s aim was to create a well-balanced composition with interesting directional movement. He then arranged photographs on top of the color grid, using a supply of images that he had cut up and kept available in a picture ﬁle. As he worked with the combination of abstract elements and photographs, an idea would begin to emerge. The collage would come into focus, moving from the “purely relational and schematic” to the pictorial. As a jazz aﬁcionado, Bearden valued improvisation and free association. He kept lists of themes he was interested in, that he added to throughout his life.

Once the composition was resolved, Bearden glued everything down on the board with resin-emulsion adhesives. He used a hand roller, or brayer, to help smooth out and ﬂatten the collage. Bearden’s photomontages were small. When he started working with color and using paint in combination with collage, he would work on a much larger scale. As in the case of Serenade, he called them collage-paintings.

Born in Charlotte, North Carolina, Romare Bearden moved with his family to Harlem as a young child, part of the Great Migration of African Americans from the South to opportunities in the North. Bearden’s father worked on the railroad and was an amateur pianist. His mother was a political activist and editor of the Chicago Defender. When the fam­ily moved to New York their apartment became a meeting place of artists and intellectuals. Both his parents were an integral part of the Harlem Renaissance. Bearden spent summers in North Carolina with his grandparents. During high school he lived in Pittsburgh, where his maternal grandmother ran a boarding house for the workers who had come to the North looking for employment.

In the 1960s, Bearden was an active participant in the Civil Rights movement and a founder of the art collective Spiral. The small black and white collages he made during that period became the bases for his later work. These collages combined Cubist composition with a sure knowledge of African sculpture. He used flat, overlapping planes of color in a shallow space where shapes would merge and come apart, tilt and spin. He made faces into masks that evoked powerful emotions, and he changed the proportions of heads and hands in relationship to their importance, in the same way traditional West African sculpture manipulated the body for expressive purposes. Artist Stuart Davis had urged Bearden to consider jazz—a musical form Bearden loved—as a source of inspiration. Davis’s suggestion led Bearden to incorporate the improvisation and rhythmic complexity of jazz into his art. Bearden said, “Jazz has shown me the ways of achieving artistic structures that are personal to me; but it also provides me continuing finger-snapping, head-shaking enjoyment of this unique, wonderful music.”

National Gallery of Art: The Art of Romare Bearden