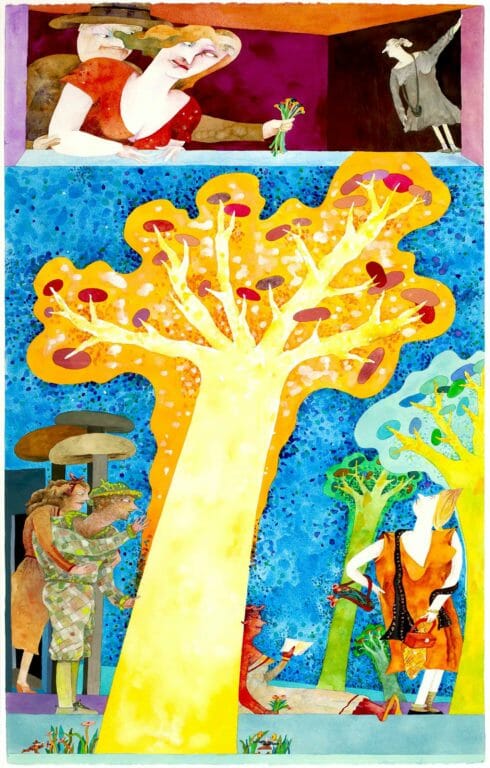 Some Other Tree and Sites Unscene

Some Other Tree and Sites Unscene display Gladys Nilsson’s delight in creating puzzling spaces crowded with interacting figures, and scenes where sizes of people and objects defy natural proportions. She has said she is inspired “by exchanges I see between anonymous people. I collect postures, body attitudes, confrontations.”

In the watercolor Some Other Tree, everything is leaning and curving in a process of growth or transformation. Plants and trees burst with liveliness and color, and people are in relationships that appear to be evolving. Noses seem long and getting longer. Mouths and eyes are expressive, revealing thoughts and feelings. Dabs and streaks of color are everywhere, contributing to the impression of organic development. It’s easy to see that the artist loves applying watercolors to paper in saturated pools, creating depth and textures.

At the bottom of Some Other Tree is a Lilliputian space in which a tiny man pursues a tiny woman among tall leaves and disc-like flowers. In the central panel’s world of blooming trees and towering mushrooms, a fellow in green plaid knickers is hugged and restrained by a woman in an orange dress, while a woman with a secretive smile rests against an orange and yellow tree, holding flowers and a letter. Another woman, carrying a basket of roses, stares upwards through the tree boughs. In the top panel’s mysteriously compressed space, a couple leans from a window. The man’s arm is around a woman dressed in red, but he also extends a bouquet of flowers to an elfin, pony-tailed woman posed on the same window ledge. It’s not certain whether there are connections between the little narratives occurring in the different spaces, but the implied relationships and the title Some Other Tree give humorous nods to the old adage that the “grass is always greener on the other side of the fence.”

In the etching Sites Unscene, four people dressed in early twentieth-century picnic clothes are seated at a café table, enjoying a lunch of hamburgers and ice cream sundaes behind a trellis hung with hops vines. Leaping toward them from the trees is a woman carrying sausages strung on a long stick. Along a stream floats a boat carrying four women, one of whom deftly stands on the gunnels, peering through a telescope. Wearing a faded homespun apron, she seems to be the star of this scene. She is pointing ahead with a smile of discovery toward further adventures, or toward the lunching group, or—just as likely—toward the smiling man leaning incongruously on the trellis. Behind the forest, and confounding the pictorial space, are structures suggesting buildings, possibly a city. Gladys Nilsson has said that prior to the period in which she made this image she had been thinking about her grandmother. Like many women of her generation, this European emigrant had arrived on a boat with other women traveling to “sites unseen,” following husbands who were settling, finding work, and building homes in America.

Sites Unscene was created at a print studio in Madison, Wisconsin, for a portfolio of artists’ works celebrating the Sesquicentennial anniversary of the state’s founding. Several elements in the print reinforce a Wisconsin connection. Hamburgers and sundaes were new delicacies in early twentieth-century America. Several cities in the United States, including Two Rivers, Wisconsin, claim they are the “birthplace” of desserts called sundaes, composed of ice cream topped with sauce or syrup. Around the same time, various locales began producing sandwiches of ground beef between bread or buns. One of the earliest claims is from Seymour, Wisconsin, where, in 1885, Charlie Nagreen (aka Hamburger Charlie) sold a meatball between two slices of bread at a local fair. Hops vines allude to both the short period of time after the Civil War when hops was a major agricultural product in Wisconsin, and to the importance of its use in making beer, a product that was intimately tied to the development of many communities in the state.

Sites Unscene is an unusual work for Gladys Nilsson, who primarily works in watercolor. In this print, however, Nilsson has communicated an impression of color tones by applying aquatint granules onto the printing plate. This technique permits variations in the depth of etching and concentration of the ink on the plate. The lush greens of the leaves and tendrils, the depths and shallows of the blue stream, and the deep browns of the tree bark are all easily imagined.

Gladys Nilsson is known for her strong lines and dense composition, with characters crowding the visual frame, as well as for her sense of humor and punning titles. Considered one of America’s premier watercolorists, she paints in large format, in contrast to traditional small-format watercolor painting.

Born in 1940 in Chicago to Swedish immigrant parents, Nilsson attended drawing classes as a teenager at the School of the Art Institute of Chicago; a scholarship from SAIC indicates early recognition of her artistic ability. Nilsson enjoyed the “otherworldly feel” of galleries in the Art Institute of Chicago that displayed plaster casts of classical sculptures and building facades. She was also influenced by catalogs from the Sears and Roebuck Company in which different sized photos of models stimulated a playful sense of varying scale.

MoMA What is a Print? resource