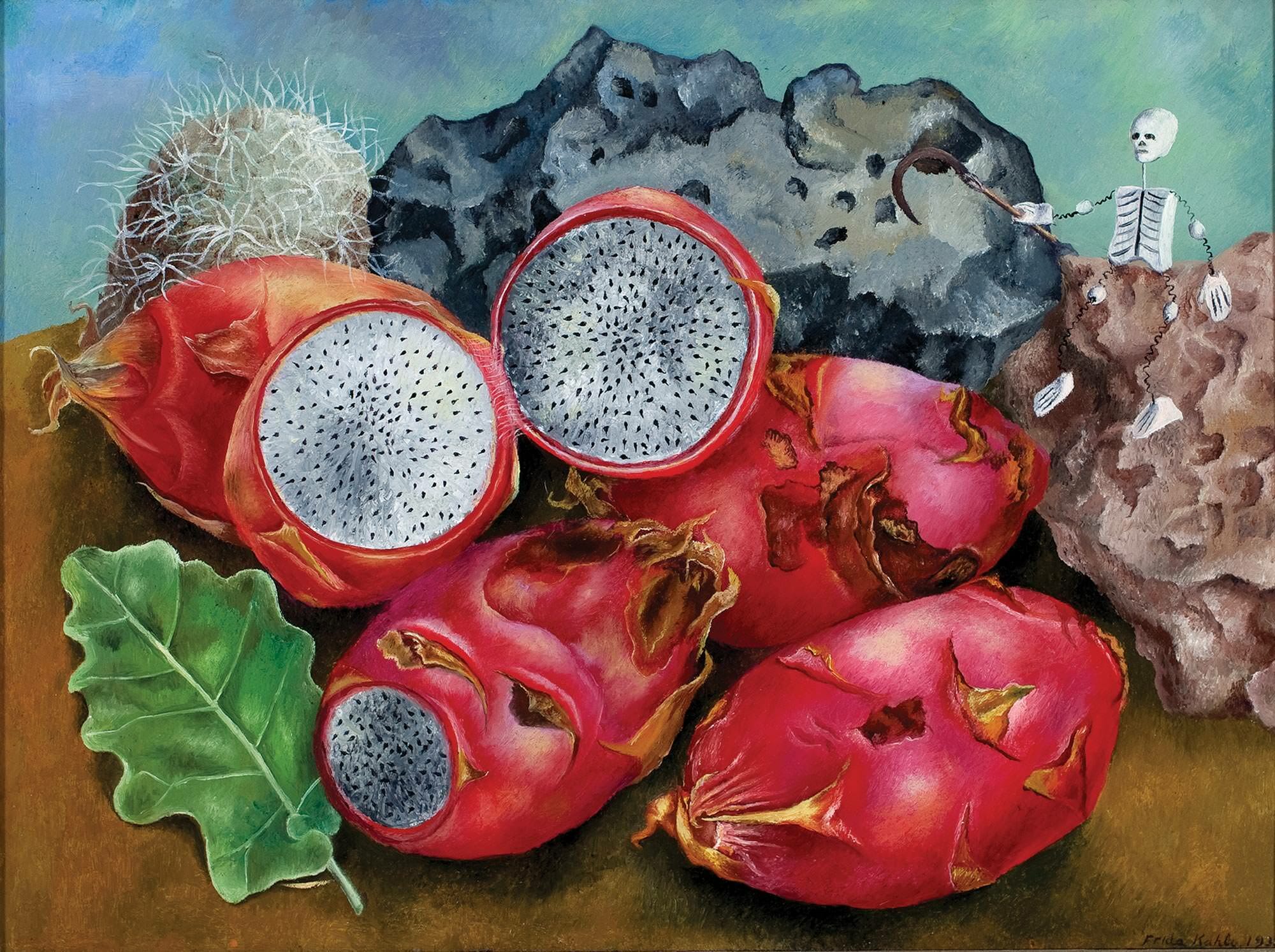 Frida Kahlo painted Still Life: Pitahayas in 1938 when she was thirty-one years old. It was painted with oil on aluminum, the traditional materials used in Mexico for religious altar paintings, known as ex-votos and retablos, which a supplicant would offer to a saint to acknowledge an answered prayer.

Each object in Still Life: Pitahayas tells us something about Frida Kahlo: where she lived, her interest in her native Mexican culture, her physical pain, and her attitudes toward life and death. The objects are positioned at the front of the picture plane and arranged so our eyes move in a circle, just as life goes from birth to death, and just as plant life is renewed as seeds fall to the ground and germinate.

The pitahaya is the edible fruit of the Hylocereus cactus, with a tough outer skin that protects the juicy flesh within. Painted images of ripe fruit traditionally referred to the bounty of nature. Here, the fruit is cut open to expose the flesh and seeds. Frida Kahlo exploits both the sexual references in this image and references to her own broken body. As a teenager she had been riding in a bus that collided with a trolley, impaling her body on a hand rail and breaking many bones. She underwent numerous operations to treat these injuries and suffered recurring pain throughout her life. The experiences related to her accident were often reflected in her paintings.

Behind the pitahayasare volcanic rocks that Kahlo may have found in the Pedregal, a vast lava field not far from where she lived in Coyoacán on the outskirts of Mexico City. Two thousand years ago Mount Xitle erupted, burying the area under molten rock and leaving a stark and beautiful landscape. Sitting on one of the rocks in Still Life: Pitahayas is a toy skeleton similar to those sold in Mexico to celebrate the Day of the Dead or Dia de los muertos. The toy is a symbol of mortality as well as a reference to Mexico’s Indian and Spanish heritage. The specter of death is strong in both Aztec and Catholic religious art, just as it was in Kahlo’s own life because of her tenuous health.

Frida Kahlo’s art reflects her own experiences but also suggests an interest in both Mexican popular art and folk art. She adapted the uncomplicated compositions used by provincial artists for many of her own self-portraits. The small scale and intense emotions of retablossuited her narrative impulses. In her art, she used images of birth and regeneration, as well as skeletons, bleeding hearts, and dualities of life and death, male and female, and sun and moon that Aztec and Catholic art share as symbols.

Frida Kahlo was born July 6, 1907 on Londres Street in Coyoacán, a suburb of Mexico City. The house in which her life began and ended was built by her father in 1904, complete with high walls and a large courtyard garden. It was the house that Diego Rivera would eventually buy from her father and where she would live most of her adult life. Now a national museum, Kahlo’s home is affectionately known as la casa azul, or The Blue House, for its brilliant cobalt blue color.

Kahlo’s father, Guillermo Kahlo, immigrated to Mexico from Germany as a young man. In Mexico, Guillermo met Kahlo’s mother, a devout Roman Catholic of Spanish and Indian descent. Kahlo was the youngest of four daughters and had a good relationship with her father. He shared his interest in Mexican archaeology and art with her, encouraged her to study nature, and gave her free access to his library. When she contracted polio at age six, he taught her soccer, swimming, boxing, and wrestling to strengthen her right leg, which had been left weakened by the disease.

In 1922, Kahlo was enrolled at Mexico’s National Preparatory School, ensuring her a university education and a professional career. However, on September 7, 1925, a two-car trolley slammed into the bus she was riding on, smashing it into a wall. She sustained life-threatening injuries and would lie in a body cast for over a year, a time in which she began painting with the encouragement of her parents.

After a long period of recovery, Frida went to work to help pay her hospital expenses. She stayed close to her friends at the National Preparatory School and active in political causes. She joined the Communist party where she met Diego Rivera’s former lover and model, the photographer Tina Modotti, who introduced her to the cultural life of Mexico City and to Rivera.

Frida Kahlo married Diego Rivera in 1929. She shared his bohemian lifestyle, his radical politics, and his devotion to art. While his frescoes covered entire buildings, her work was more intimate in scale. Although her paintings were not well known during her lifetime, today she is recognized around the world as a great artist, a feminist, and a social critic. The Surrealist writer André Breton described her work as a “ribbon around a bomb,” because of its power to disturb and to provoke thought.

Essay on Pitahayas by MMoCA Curator

In Depth Virtual Tour of Pitahayas

The Life and Times of Frida Kahlo