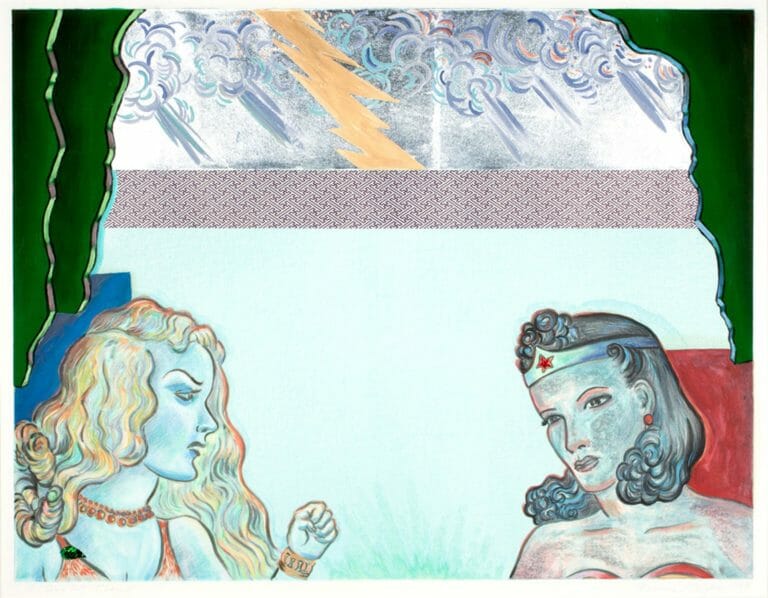 A One Act Play

In A One Act Play, the familiar comic book hero Wonder Woman is confronted by another female character whose blonde hair, beaded necklace, and wrist cuff help identify her as Wonder Woman’s major adversary Queen Clea, ruler over parts of the underwater world of Atlantis. As in a scene onstage, the characters appear to be seated on chairs or thrones, blue for Clea, red for Wonder Woman, and framed by craggy green borders resembling theater curtains. Behind them is a watery, aquamarine vista below a shiny, stormy sky. Tense, interlocking geometric patterns suggest a brown, earthly horizon separating Clea’s realm in the sea, from Wonder Woman’s dominion in the sky.

Queen Clea is facing and seems to be berating Wonder Woman. Her gaze is direct and challenging, her eyebrows arched, and her mouth open as she expresses her sentiments. Her arm is raised, fist clenched and aimed toward Wonder Woman. In contrast, Wonder Woman’s head is tilted, her eyes contemplative, both far-seeing and inwardly focused, and her arms with their magic bracelets and her Lasso of Truth are not in view. Only her trademark tiara, with its capacity to become a projectile and communicate telepathically, suggests her powers. She is not engaged with Clea’s aggressive overture.

Between the two heroines green flames leap up from an inferno below and thundering clouds along with a lightning bolt from the skies above signify the strong sentiments between the heroines, as well as the forces of their respective realms.

There is ambiguity about the story this “one-act play” is depicting. During the 1980s Frances Myers explored issues of gender and power in her art and said she was interested in creating prints “portraying the heroic aspect of woman—heroic both in scale and deed. For this I have often used the image of Wonder Woman as I remember her from childhood comics. Instant recognition of the Wonder Woman character and all the qualities associated with her allows me to lead my audience quickly and surely to the emotional response I hope for—to the realization of the human dichotomies which this feminist, but universal icon represents: strength/fragility, action/reflection, certainty/doubt, courage/fear.” In this print the two women may jointly depict these dichotomies. Perhaps Clea represents traditional cultural resistance to the strength and power of a feminist woman, represented by Wonder Woman.

After studying at the San Francisco Art Institute, Myers transferred to the University of Wisconsin-Madison where she was a student of the well-known printmaker Alfred Sessler. After earning Master of Arts and Master of Fine Arts degrees, she lectured in printmaking at the College of Art and Design in Birmingham and St. Martin’s School of Art in London, England. She taught printmaking at the University of California-Berkeley, Mills College in California and, beginning in 1975, at the University of Wisconsin-Madison where she became Professor of Art and Chair of the Graphics Department. She became widely known for her subtly toned aquatints, but she engaged in a variety of forms of printmaking techniques, including relief, photo-etching, and mixed media processes, creating much of her work in her home studio shared with her husband, printmaker Warrington Colescott. She also created works using computers, digital photography and video.

While she was growing up in Racine, Wisconsin, Myers admired the innovative Johnson Wax building designed by Frank Lloyd Wright located in Racine. Years later she was commissioned to create a series of etchings of a number of Wright’s most famous buildings.

Myers said, “My work is influenced by my surroundings, the objects and consumables I use and see, by what’s happening in the larger world, and by the events I read about in the daily New York Times newspaper. I had a wonderful high school art teacher, Sister Monica, whose dedication to art was like nothing I had ever witnessed. As an impressionable teenager, I wanted the same thing, the same aura (and I thought I drew well and liked doing it).”

Myers was inspired to use the Wonder Woman icon in her work during the 1980s by a tiny figurine that had been placed among the candles on a birthday cake.

University of Wisconsin–Madison Videotaped Artist Profile Oral History Interview. The interview is contained in four mp3 files. Tape 2, side one (at end) and side two, and Tape 3, side one address the artist’s use of Wonder Woman imagery.

What is a print? MoMA interactive