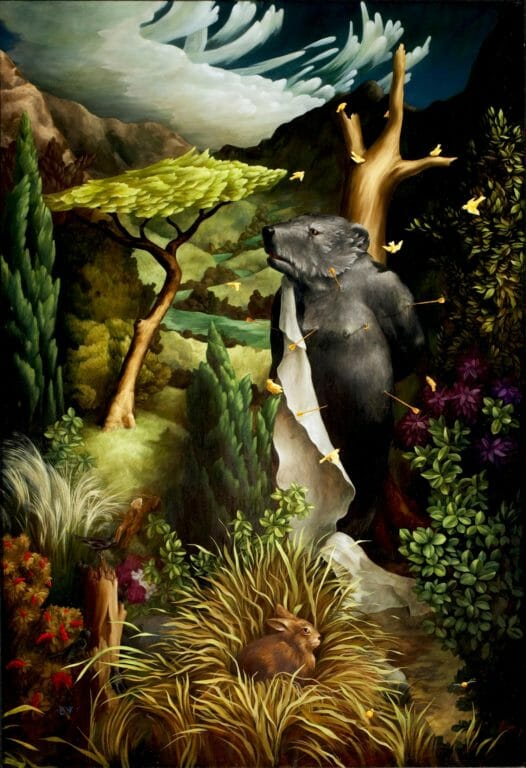 At once beautiful and mysterious, the paintings of Erik Weisenburger enchant viewers with their luscious color and intricate detail. Upon first glance, his painting Ursa Memoriam may recall traditional still-life or historical painting, but closer inspection reveals a contemporary voice that presents timeless subjects in new contexts. Weisenburger gracefully combines his interests in history, myth, bible stories, and nature to create poignant narrative works that reflect on both the past and the present.

In Ursa Memoriam, a dignified black bear is shown in a vibrant natural landscape of trees and flowering shrubs, standing upright against a tree, around which his arms appear to be tied. The bear has been struck with golden arrows, but miraculously there is no visible blood to stain the white fabric draped across his body. His martyr-like pose and stoic expression lend a feeling of sadness and a sense of innocence to this powerful creature. Resting at the bear’s feet is a brown rabbit wreathed in grass reminiscent of the golden glow of a halo. Small yellow birds flutter around the bear’s head and body, and a second rabbit leaps away, tail raised in warning. The darkening sky and wind-swept clouds add further drama to the unnerving scene.

Weisenburger often works with a story, person, place or memory in mind, and Ursa Memoriam is no exception. He was inspired to create this painting after watching a particularly moving news story about a man in northern Wisconsin who had lured a bear into his yard with bait to shoot and kill it from the convenience of his porch. Weisenburger was overcome by the bear’s powerful beauty, and shocked by the cruel death to which it was subjected. His mesmerizing painting memorializes the bear and alludes to its saintliness in the face of needless sacrifice.

Weisenburger chose the early Christian martyr Saint Sebastian an apt symbol for the bear. Saint Sebastian was a frequent and important subject in Western European Renaissance painting, a style of painting which Weisenburger admires and which the landscape in Ursa Memoriam evokes. Sebastian was a guard to the Roman emperor Diocletian, and also a victim of Diocletian’s persecution of Christians. For practicing Christian worship, which was seen as a betrayal to the Roman Empire, Sebastian was tied to a tree and shot with arrows, but miraculously survived. After his ordeal, Sebastian confronted Diocletian, who responded by having Sebastian beaten to death. Sebastian’s body was never found, giving him the nickname of “the living saint.” He is now celebrated as a saint symbolizing sacrifice, resurrection, and eternal life. Weisenburger uses allegory to compare the bear with Saint Sebastian, inspiring viewers to consider betrayal from different viewpoints, and also consider the consequences of following different paths of thought and action.

Weisenburger works in a painting tradition used by the Old Masters, particularly the 17th Century Dutch still life artists. He first prepares the surface of a small wooden panel with layers of gesso, and after sanding it smooth, sketches loosely in pencil before forming a more precise image. He then paints with oil washes, slowly building layers of paint and varnish to achieve the final image. He uses brightly saturated color to imbue his work with an expressive intensity. Weisenburger paints in this tradition because it “best allows me to explore and interpret the mingling of memories, monuments, permanence and impermanence.”

Erik Weisenburger spent many years living and working in Chicago, but in 2005 moved to Portland, Maine, where he currently resides and continues to work. He studied at the Parsons School of Design in Paris and earned his Bachelor of Fine Arts degree in sculpture from the School of the Art Institute of Chicago in 1992. Five years later he earned his Master of Fine Arts degree from the University of Wisconsin-Madison. His work is in several collections in Wisconsin, including the Madison Museum of Contemporary Art, the Racine Art Museum, and the University of Wisconsin-Madison. Weisenburger has participated in numerous solo and group exhibitions throughout the country, including the Perimeter Gallery in Chicago, and Dean Jensen Gallery in Milwaukee, and was recently featured in the Center for Maine Contemporary Art 2012 Biennial.