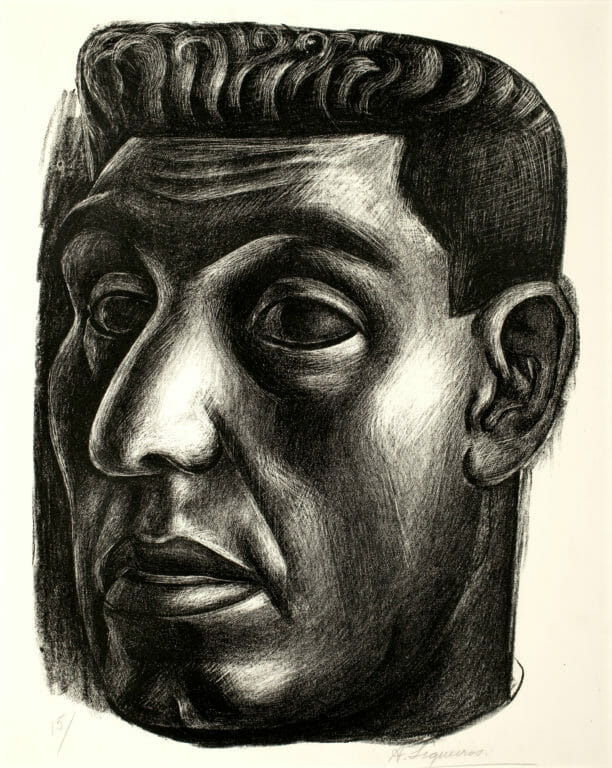 In his Portrait of Moisés Sáenz, artist David Alfaro Siqueiros has brought together several of his interests: modernist art styles that emphasized expressiveness; Revolutionary Mexico’s pride in its indigenous history; and post-Revolution governmental emphasis on universal education and literacy. Siqueiros was a champion of artistic and citizenry advancement against repression and limits; he represented this passion in his portrait of Sáenz who, as Secretary of Public Education, founded an extensive system of schools in rural post-Revolutionary Mexico. Siqueiros’ depiction salutes this leader and is likely an intentional reference to his country’s lineage of distinctive cultural practices preceding foreign intrusion. It alludes to giant stone heads sculpted from basalt boulders that have endured from the prehistoric Olmec culture in Mexico. In Siqueiros’ image of an imposing head, isolated from any body parts, the facial features and ears are exaggerated and highlighted with contrasts of black and white. Deep-set eyes seem to both engage the viewer in the moment and gaze into the distance. Small parallel lines, scratched by the artist through inked areas on a polished lithography stone, suggest volume and texture. White highlights emphasize the line of curls along the hairline, recalling curling patterns in the textiles of indigenous Mayan peoples or shapes sculpted on the helmets of the ancient Olmec heads.

Born in the Mexican state of Chihuahua in 1896, José de Jesús Alfaro Siqueiros used his mother’s surname, Siqueiros, and assumed the nickname his wife called him—“David.” He studied at the Academy of San Carlos and experienced his first arrest and incarceration for throwing stones in a student strike. He had absorbed the political ideas of writer and artist Dr. Atl, whose 1906 manifesto encouraged Mexican artists to look to their country’s indigenous culture for inspiration in developing a national art. When he was eighteen he joined Venustiano Carranza’s Constitutional Army, fighting President Victoriano Huerta’s harsh military dictatorship. When Huerta’s government fell in 1914, Siqueiros continued to participate in the military revolution, rising to the rank of captain and military attaché. He was sent to perform diplomatic duties in Madrid and Paris, where he learned the stylistic elements of Cubism. He met and traveled with Diego Rivera through Italy to study fresco paintings of the Renaissance. While in Europe, he wrote “A Manifesto to the Painters of America” in which he called for an art of the New World, free from the constraints of the Old, and for a “spiritual renewal” in art that would infuse indigenous traditions with contemporary, modern elements.

Upon his return to Mexico, Siqueiros was employed under Secretary of Public Education José Vasconcelos in Álvaro Obregón’s new revolutionary government, participating in the government’s effort to educate the populace by painting murals on prominent buildings. Throughout his career Siqueiros was a passionate political activist. Together with a group of other artists he founded the Syndicate of Revolutionary Mexican Painters, Sculptors and Engravers that published a union paper, El Machete, which promoted collective art and to which he contributed politically-inspired woodcuts. Siqueiros advocated collective art-making throughout his life, culminating in his grand sculptural painting The March of Humanity on the exterior and interior walls of an octagonal structure called the Polyforum in Mexico City, created by a team of architects, engineers, artisans, sculptors, painters and acoustics engineers. He experimented with new paints, including automobile paints, spray guns, and other tools to accommodate the surface of modern buildings and the outdoor conditions.

A statement on moving forward