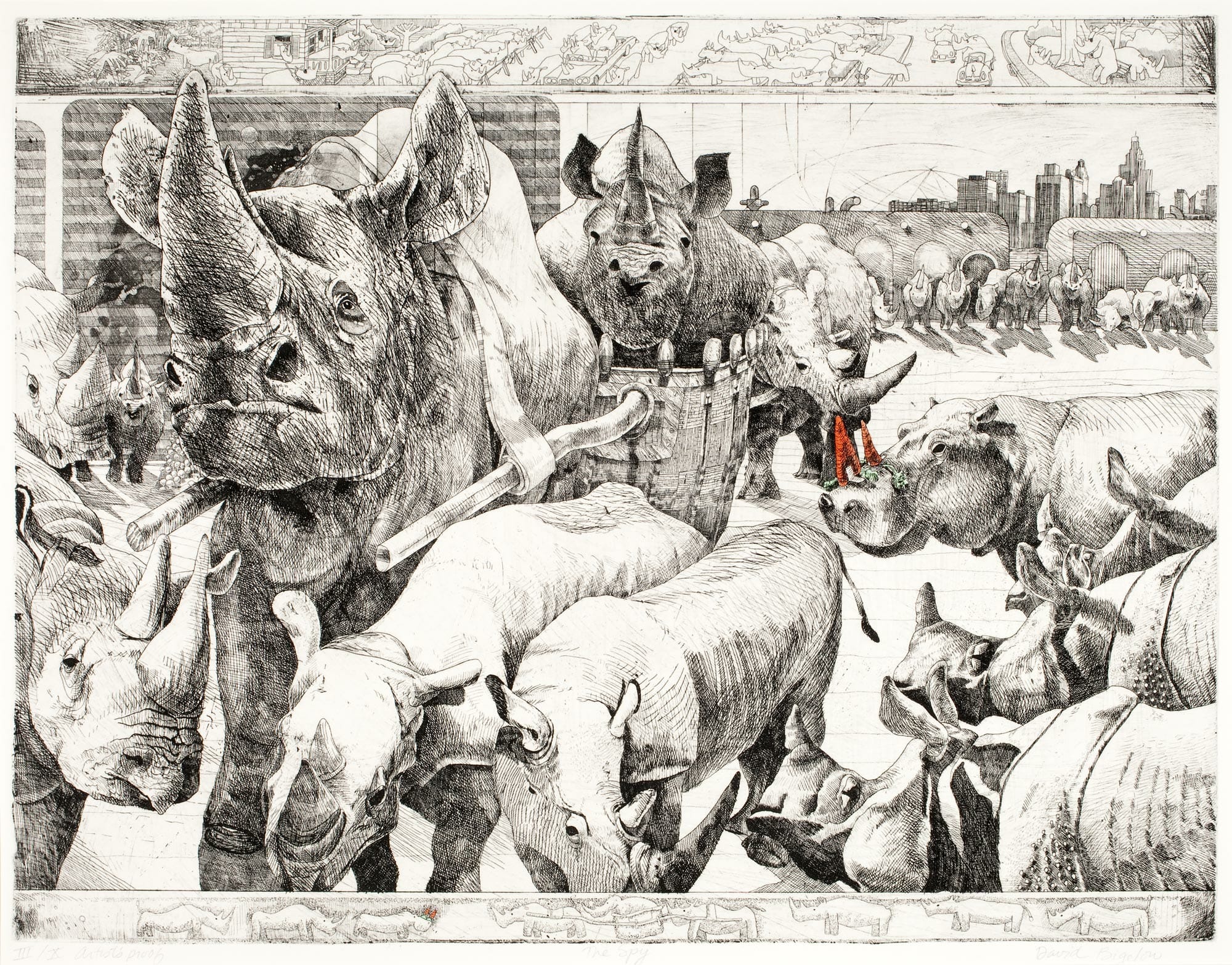 What a lot of rhinos! As many as twenty-one rhinoceros are standing in a plaza surrounded by adobe walls not far from a big city—settings that are very different from the grassland territories of wild rhinos. Admirers or guardians crowd around an important character being transported, like a celebrity, in a basket hauled by two harnessed fellows. Other rhinos are lined up in the back, resembling sentries. One sly character seems to have infiltrated the group by wearing a clever disguise. With a couple of ordinary orange carrots taped onto its nose, this wily hippopotamus is hiding in plain sight as part of the rhino crowd.

Narrow borders, somewhat like filmstrips, edge the top and bottom of the picture. In the lower border a comparable story is played out, in which a rhinoceros is being carried in a basket, surrounded by a group that includes an individual in a carrot-horn disguise. In the border at top, a “special” rhino is also being transported surrounded by other rhinos, this time in a car that is proceeding down a street lined with crowds held back by barricades. Behind the crowds are characters wearing sunglasses and carrying walkie-talkies who seem to be staking out the park and countryside, perhaps looking for hippos in disguise.

Close looking reveals that these animals are really not all the same. Some have one very big horn and another smaller horn; some have two horns that are not quite so large; and others have only one horn. The rhinos display the kinds of variation that exist among the five different species of rhinoceroses in nature. Like most groups of natural beings, there are many similarities, some group differences, and various individual differences. Even though the hippo has smaller ears and needs carrots to look like the horned animals, he shares many traits with the rhinos. The title of the print, The Spy, hints at possible reasons why someone might disguise their appearance to be part of a group. These animal characters have been amusingly drawn by the artist to depict behaviors often exhibited by humans.

Form and volume are indicated with carefully drawn lines and cross-hatching. The bodily features of the rhinoceros and the character with the carrot “horns” are revealed through the quantity of dexterous lines. The white spaces of the paper suggest the glare of the sun reflected off the ground and the backs of the animals.

Essential Question: How do artists create works of art that effectively communicate?

Essential Questions: Where and how do we encounter images in our world? How do images influence our views of the world?

Essential Questions: What is the value of engaging in the process of art criticism? How can the viewer “read” a work of art as text?

Essential Questions: How does making art attune people to their surroundings? How do people contribute to awareness and understanding of their lives and the lives of their communities through art-making?

David Bigelow is a graphic artist who is known for the humorous quality of his work. He has said, “Humor in itself definitely is not a reflection on objective quality. People know what a cartoon is, a drawing which has as its only function to support the joke. But some work is very different from cartooning; even if you don’t get the joke there still is a good piece of work, a good composition.” He often uses unexpected subjects as substitutes for people to make funny or pointed commentary. He was born in Ann Arbor, Michigan, and earned his Bachelor of Fine Arts and Masters of Fine Arts degrees in printmaking and drawing from the University of Michigan. He lives in Ozark, Missouri. His wife, Marcia, applies watercolor to parts of his prints, such as the carrots and leaves in The Spy.

adobe a brick or building material of sun-dried earth and straw, commonly used in areas with little rainfall

celebrity a famous or well-known person

trait a distinguishing characteristic or quality

wily skilled at gaining an advantage, especially through trickery or deviousness

Quotes on being an ‘outsider’