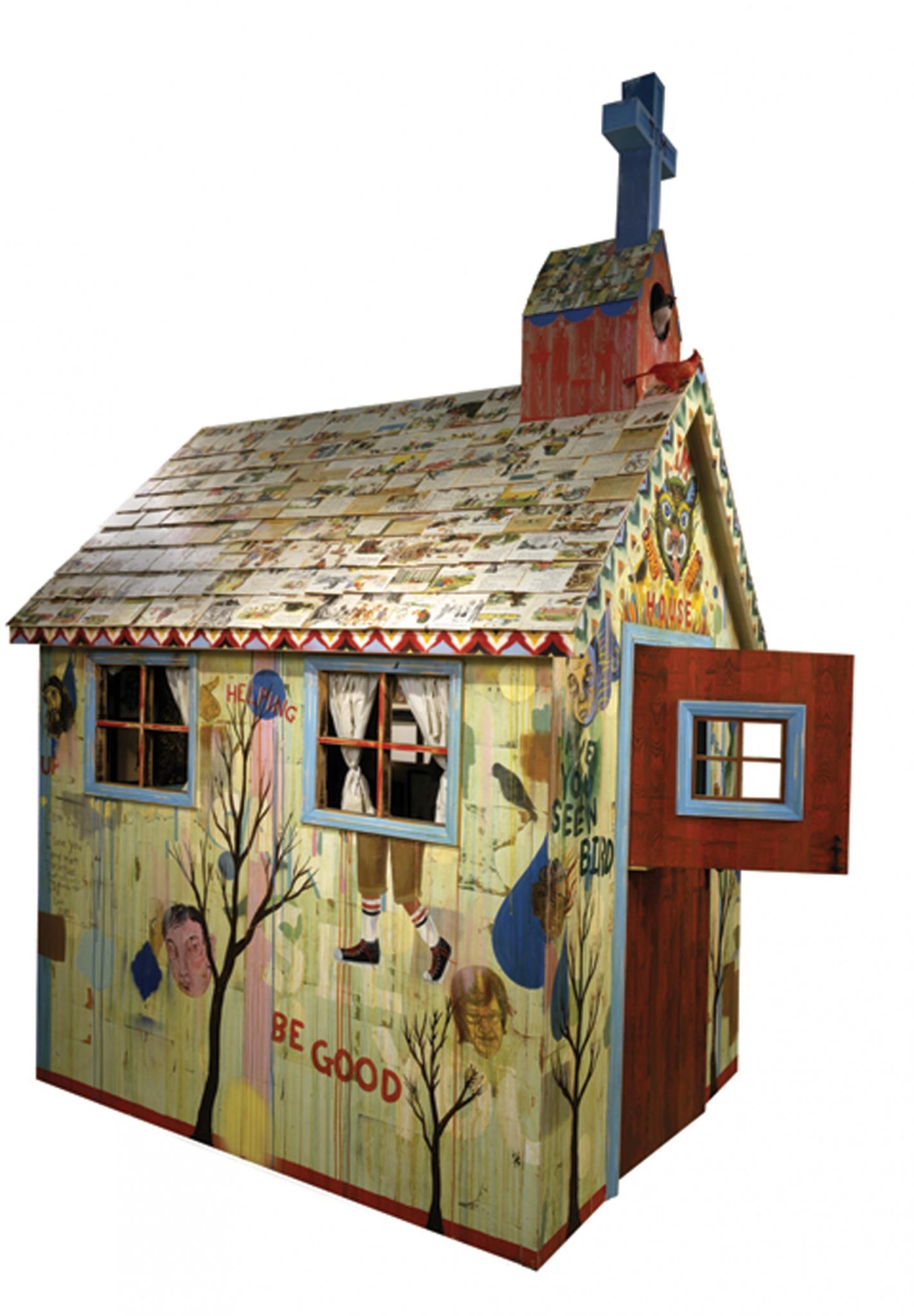 Tim House (In Green Pastures), the child-size sculpture by Rob and Christian Clayton, is a vibrantly painted wooden structure covered with words and images. The sculpture, with its cross bearing the name “Tim”, and its pointed roof and split door, is reminiscent of a clubhouse, a one-room schoolhouse, or a small church. It has features common to many homes, such as a doorbell, a house number, a lock, and curtained windows. However, images of people and animals, the silhouettes of leafless trees, and phrases like “Be Good” and “We Don’t Mean No Harm” decorate its exterior surfaces. Above the entrance, the face of an imaginary feline is framed by the name “Tim” and the words “ding dong” painted on dynamite sticks. A pair of birds has found shelter for raising a family in a birdhouse that sits on roof shingles made from storybook pages.

The Clayton Brothers think of Tim House (In Green Pastures) as a sanctuary or a shelter for untold stories. The sculpture was inspired by the artists’ memories of Tommy, a young man with developmental disabilities who lived in Tim House, a home for people with special needs. They would frequently see Tommy when they were riding bikes in their suburban Denver neighborhood. On one occasion, Tommy gave the brothers a photograph of himself with the words “Tim House” and a partial phone number written on the back. This photograph became the basis for an ornately framed painting inside Tim House, where it is surrounded by dozens of framed drawings and paintings inspired by television characters, yearbook pictures, and photographs of the Clayton Brothers’ friends and family. Cryptic messages scrawled on the walls, a handwritten recipe for orange sugar cookies, and fragments of old wallpaper evoke times past. A hand-painted phrase, “Welcome to Tim House. Sit here,” beckons us to sit on a bench and listen to fiddle music played by Arizona miner and tracker Richard Haught. We are further invited to “sing a song” if we so choose or contemplate words such as “I,” “am,” and “normal,” hanging in picture frames on the walls.

Sheltered from the outside world in this unusual yet familiar setting, we find ourselves surrounded by history and memory. As Rob Clayton said, “To me, it’s the stories that I think we were really trying to give credence to…I think the context of Tim House is like a big novel without too many words.”

Rob and Christian Clayton frequently draw inspiration for their work from their shared experiences and memories. As they have said, “In a sense, we developed a language as youngsters that led to what we do now…We’ve fought and had our differences, but we’ve always shared influences and inspirations.” Born in 1963 and 1967 respectively, Rob and Christian Clayton grew up in Aurora, Colorado, a suburban community near Denver. Their father, Robert Alan Clayton, a photographer and avid traveler, took the boys on family trips to the west coast where they were exposed to the lively urban life and diverse landscape of Southern California. They recall the vivid memories they have of those experiences and their excitement at discovering California’s energetic and open-minded cultural life. These childhood recollections of home and travel as well as their relationship with their father influence their art practice. The fiddle music that plays in Tim House, for example, was recorded by their father while on working on a photographic project.

The Clayton Brothers began working collaboratively in 1996. They had shared a studio for some time, but had separate art careers. Almost on a whim, they began to paint on each other’s canvases. As Rob has said, “When one guy would leave, the other guy would try to sneak something in there, and that whole act became really kind of fun and liberating. It broadened the language of what we did…”

When working together on a painting or sculpture, the Clayton Brothers relinquish control to the hands of the other in a process of open-ended decision-making. They start with an idea, a thought, or a memory, and allow the narrative to grow organically over the course of many revisions. Although they don’t talk in specific terms about a work as it is developing, they give clues to one another in the form of written words and imagery. This “conversation” guides them as they progress through the creative process to a completed work of art. The final multi-layered painting or sculpture emerges from numerous creative turns; they stop working only after they have reached consensus that it is finished. Their eclectic, whimsical, and varied style is the result of this unusual creative process—they are often themselves surprised at the outcome. Over the past fourteen years, the Clayton Brothers have produced several major series of paintings and sculptures including In Green Pastures, I Come From Here, Wishy Washy, Patient, and As Is.

Rob and Christian Clayton graduated from Art Center College of Design in Pasadena, California in 1989 and 1991 respectively and are currently faculty members there. Their twenty-year creative collaboration (1996–2016) included work in fine art, illustration and graphic design, animation, and music video.