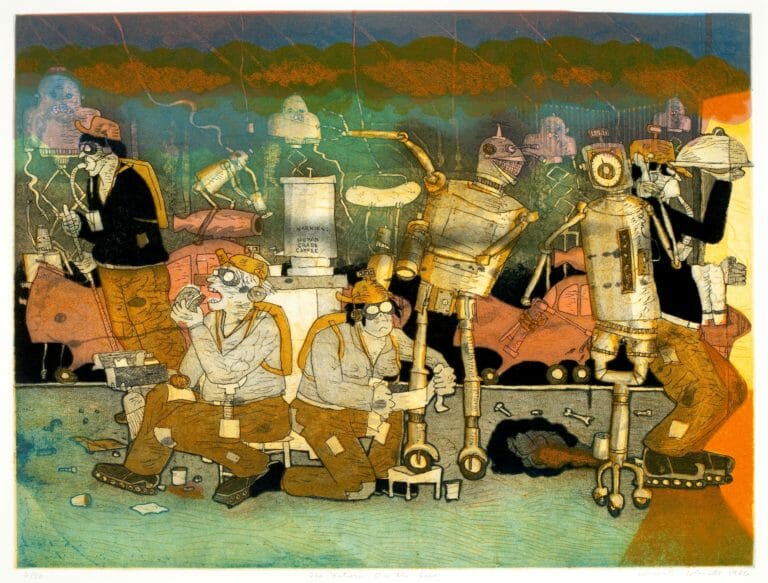 The Future: On the Line, 1986, etching and aquatint

Students will attempt to imagine the future through storytelling and the construction of a personal robot. Teachers involved will need to send home a “wish list for sculptural materials” several weeks in advance of the project. The list might include such items as clean tin cans of various sizes, cast-off aluminum kitchen wares, spools, pipe cleaners, wire, plastic toys, clean cardboard boxes and delicatessen containers, buttons, beads, sewing trims, bottle caps, and plastic lids.

Warrington Colescott was born in Oakland, California in 1921. His parents were of Creole descent and had moved from Louisiana to California in 1919. Colescott took on a newspaper route at age twelve, which allowed him daily access to comic strips. He loved to draw and drew his own comics and sent them to his cousins in Louisiana for approval.

Colescott’s parents played musical instruments so there was always music in the house. They also took the family to the nearby de Young museum, part of the Fine Arts Museums of San Francisco, where Colescott became interested in art with religious themes. The narrative religious images and his ongoing love of cartoons became themes that would be featured in his adult work. In high school, Colescott drew cartoons for the school newspaper; vaudeville shows, burlesque, and movies were also influences at this time.

Colescott enrolled at the University of California at Berkeley in 1938. Although interested at first in taking pre-medical courses, he chose instead to study art history, painting, and drawing, and began to draw political cartoons for the campus newspaper and a humor magazine.

In 1942, Colescott joined the army, and was stationed in North Carolina, Texas, Georgia, and Okinawa, an island then under United States control and now part of Japan. Soon after, he was sent to Korea during an occupation he describes today as cruel. The sights that Colescott had witnessed in the army…horrifying, ridiculous, funny, and sad…have resurfaced in his work throughout his life.

Warrington Colescott considers himself to be a satirical artist. Satire is a kind of art that combines opinions about political or social issues with humor to poke fun at its subjects. Common themes in Colescott’s work are the follies and horrors of war, the histories of many subjects including printmaking, the misuse of wealth and power, politics, and relationships between men and women. In 1985 and1986, he produced several prints that explored his vision for the future.

Colescott joined the faculty at the University of Wisconsin-Madison in 1949, teaching drawing and painting and, later, printmaking. Over time, his contributions helped to make the University of Wisconsin-Madison’s printmaking program one of the most admired in the country. Colescott has exhibited his work internationally and his prints are in the collections of many major art museums. He continues to make prints, drawings, and paintings at his studio on his farm near Hollandale.

Students will work in a group to analyze The Future: On the Line and brainstorm what they foresee in their own futures. Ask the students to consider the changes they imagine will have happened in the world. Ask them to think about what might be better and what problems may become worse. Ask them to imagine if a robot might be able to help with any of these changes? Using internet searches, books, and cartoons, students will learn about robots past and present, noting what tasks the robots are accomplishing and other attributes. Ask the students to compare robotic characters such as R2-D2, C-3PO and WALL-E as well as the robot in the 2012 film Robot and Frank, and Robbie the Robot from Forbidden Planet. Ask them to consider the similarities and differences between the robots portrayed.

Using the key words “21st century robots,” students can see many uses for robots in space exploration, warfare, and science. Ask them to consider what are the positive and negative results of these technological developments?

After their investigations are complete, students will construct a three-dimensional personal robot using materials from the art room and “found” materials they bring from home. Instruct the students to attach arm and leg pieces to a wire armature. Teachers will want to offer safety tips for working with wire/wire cutters and will need to be in charge of any specialty gluing with hot glue or construction adhesive. If a traditional silver color is desired, spray paint them outdoors after assembly; however, some styrofoam and plastics degrade when spray painted.

Access to a computer lab for robot research, found materials for building robot sculptures, caulk gun with tubes of building adhesives (for use by teacher), hot glue guns and glue sticks (for use by adult helpers), wire for armatures, pliers and wire cutters, silver spray paint (optional)

Students could create Litter Lake by drawing and placing in their pond human-made objects that people might throw in a lake. Discuss why these objects might harm a pond and animal and plant life that live within and around it.