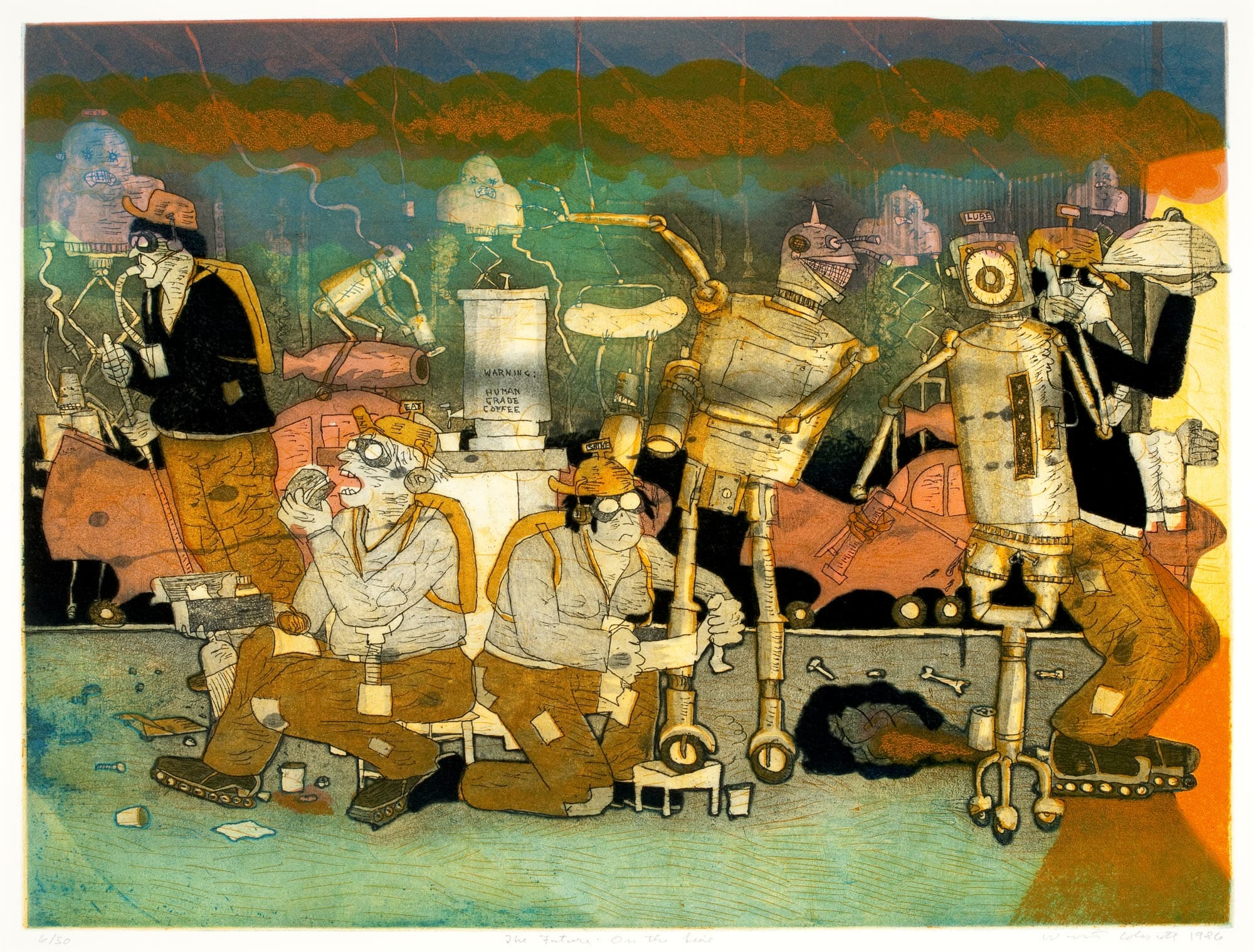 The Future: On the Line

There’s a pun in the title The Future: On the Line. Assembly line workers are building vehicles of the future, but their appearance, their functions, and their environment suggest that work life is “on the line” or on the brink of worrisome change, where humans are subservient to robots who supplant them in performing industrial tasks.

The status of the workers in this factory is hinted at by the sign on the coffeemaker, which says, “Warning: Human Grade Coffee.” Human employees are wearing old, patched clothes, safety glasses, hearing protectors, supply packs strapped to their backs, and gas-powered rollerblade skates to speed around the work area. A couple of them are wearing gas masks to shield them from the pollution of the factory. None of them actually seems to be applying his skills to the assembly of cars. One sweeps the floor, one polishes the leg of a metal robot, one pauses to eat his lunch from his lunch bucket, and another, wearing a napkin over his arm like a waiter, carries a covered platter towards an alternate, luckier, world where food is served and the air appears clear. It is the robot workers who dominate and are looked after by the human workers. Not only are there people-sized robots who are chatting, using a telephone, and enjoying their superior status, but there are also little ghostly robots on scissor lifts performing the kinds of skilled functions on the assembly line that used to be performed by human workers. The humans look glum, the robots seem happy.

Wrenches, bolts, and some trash lie on the floor. Machinery and tools are suspended over the line by cords or wires, enabling workers or robots to grab them easily. A streak of dirty, smoky exhaust blows across the area. Red, yellow, blue, green, and orange colors in this place have been clouded over with a dingy black haze from the clouds of pollution hanging above the workers; this is a murky, toxic environment. In the background a wall of corrugated metal ends in an open door, through which clear yellow light suggests a cleaner and brighter parallel environment.

Assembly lines were used early in the twentieth century by Henry Ford for construction of automobiles. Workers “on the line” applied standardized parts to vehicles as they were mechanically moved from one specialized work station to another. This efficiency-oriented process was the status quo until the 1980s, when robots were introduced into automobile construction to perform tasks that had been done by humans. Invented in the 1950s, the first robots were mechanized arms that could transfer objects from one place to another, and eventually assemble and even weld. Ever since the height of the robot boom in the mid-1980s—when Colescott made this print—robots have been used as substitutes for workers to do repetitive, boring, and even injurious tasks and to ensure consistency in products. According to the Robot Institute of America, a robot is “a reprogrammable, multifunctional manipulator designed to move material, parts, tools, or specialized devices through various programmed motions for the performance of a variety of tasks.” Today, over fifty percent of all robots in use are engaged in automobile manufacture. Other uses include underwater exploration, military warfare, agricultural chores, and many health care applications, particularly surgical operations.

The Future: On the Line was printed with copper etching plates. The image was drawn first on one plate and then printed onto a second plate. Then, two or three colors were applied to each plate and printed, one after the other, onto each piece of paper, thus combining the colors. The hazy streak of exhaust across the image was created by spitbite, in which acid was brushed across the plate to create a light, flowing impression into which black ink was applied and then printed, leaving a cloudy, smoky effect.

Anchor Standard 2: Organize and develop artistic, ideas, and work
Essential Questions: How do objects, places, and design shape lives and communities? How do artists create works of art that effectively communicate?

Anchor Standard 10: Synthesize and relate knowledge and personal experiences to make art
Essential Questions: How does making art attune people to their surroundings? How do people contribute to awareness and understanding of their lives and the lives of their communities through art-making?

Born in California to parents of Louisiana Creole descent, Warrington Colescott is an emeritus professor at the University of Wisconsin, Madison, where he was a professor and the chair of the Art Department of between 1949 and 1978. As a child he was fascinated with comic strips, and in his college years he drew political and sports cartoons for two student publications at the University of California at Berkeley. He was a Fulbright Fellow and a Guggenheim Fellow in London and Rome, and his early works were primarily paintings. By the early 1960s Colescott was focusing his work on intaglio printmaking, and his imagery had evolved into social satire and commentary.

Colescott is “interested in humor based on reality and what is behind the familiar.” For The Future: On the Line he translated what he had learned about the surge in use of robotics in industry, as well as photographs he had seen of robots in factories, into an observation about social structures and class structures. He has said, “My prints are narratives. I’m telling a story, one that is not completely true but is close to reality. My intent is to look at social structures in a humorous way.” As is typical of all of his prints, it is important to look closely to notice all the details that he combines to convey his ideas.

assembly line [also called production line] a line of machines, equipment, and workers in a factory that builds a product by passing work from one station to the next until the product is finished

corrugated having a wavy surface

efficiency the ability to do something or produce something without wasting materials, time, or energy

pollution substances that make land, water, and air dirty and not safe or suitable to use

robot a machine that can do the work of a person and that works automatically or is controlled by a computer (from the Czech word robota, meaning drudgery or slave-like labor)

status the position or rank of someone or something when compared to others in a society, organization, or group

subservient serving or acting in a less important or subordinate capacity

PBS NewsHour on the artist

Article on increasing prevalence of robots