MADISON, WI—The Madison Museum of Contemporary Art (MMoCA) is pleased to present the community-based, interactive art project AMENDS, by Chicago-based artists Nick Cave and Bob Faust. The internationally known artists and collaborators created the three-component project in 2020 after the murder of George Floyd by a police officer in Minneapolis. The ultimate goal of AMENDS is to lay the groundwork for the eradication of racism. Opening on Saturday, June 19, in MMoCA’s new interactive contemporary art space, The Shop, AMENDS will bring together the artists, community leaders in the Madison area and the state, and members of the public to complete the three components of the project. The exhibition will open on Juneteenth, the oldest nationally celebrated commemoration of the ending of slavery in the United States.

Presented first in 2020 at the artists’ creative space Facility, in Chicago, AMENDS asks individuals to look inward to acknowledge and take responsibility for their personal role in the proliferation of racism through publicly shared confessions and apologies. The artists told the story of the project’s inception, explaining that Faust came home last summer from protesting in Chicago and was feeling hopeful. Cave, however, thought protesting was not enough to incite real change and responded: “If you want to march about it, you have to talk about it.” Cave needed more than protests, signs, and posts on social media. He wanted an apology from Faust, and others in the community, for anything they may have done to perpetuate racism.

Cave had originally created and installed the sparkly smiley and masked faces in an installation at Facility as part of an earlier project to bring joy and free masks to people during the beginning of the pandemic. They were hanging in the windows of Facility when George Floyd was murdered. Cave replaced them with frowning faces and that’s when AMENDS began.

This summer in The Shop at MMoCA, all three versions of the masks will hang to demonstrate that, a year later, the cycle of violence continues and racism and police brutality are still prevalent in America. “At this moment, we as individuals, and we as Facility, in collaboration with the Madison Museum of Contemporary Art, must continue to be an active part in the eradication of racism. We are honored and grateful for the opportunity to deepen this work through MMoCA and the Madison communities,” Cave said.

The project has three interlocking phases, the first of which will begin in late May, before the exhibition opens.

Phase I: Letters to the World Toward the Eradication of Racism

MMoCA asked select state and city community leaders to contribute a letter, a quote, or a note that brings to light their roles in contributing to racism through acknowledgements, confessions, and apologies. These letters will be written by the participants on the State Street facing windows of The Shop, with the artists, at the end of May. The event will be filmed so that visitors to the exhibition in The Shop will be able to witness the project’s start and, through the video, hear directly from the artists and others about what the project means to them.

According to the artists, the public will be asked to: “Identify the pieces of yourself that have contributed to holding our society back from genuine equality and equity.” Individuals will write their response to the prompt on a yellow ribbon and tie it to the AMENDS clothesline. These responses will be solicited at the Museum and at designated sites within Madison’s communities.

In consultation with the artists, MMoCA will program The Shop space for a series of performances that center Black voices by poets, spoken word artists, dancers, and other creatives, and respond to the words written on the Community Clothesline.

Nick Cave is an artist, educator, and foremost a messenger, working between the visual and performing arts through a wide range of mediums including sculpture, installation, video, sound, and performance. Cave is well known for his Soundsuits, sculptural forms based on the scale of his body, initially created in direct response to the police beating of Rodney King in 1991. While Cave’s works are rooted in our current societal moment, when progress on issues of global warming, racism and gun violence (both at the hands of citizens and law enforcement) seem maddeningly stalled, he asks how we may reposition ourselves to recognize the issues, come together on a global scale, instigate change, and ultimately, heal.

Bob Faust is the principal and creative director for Faust, a cultural branding and communications studio in Chicago. His collaborative and non-secular approach to his work results in functionally expressive visual experiences that inspire change and instigate tangible actions. An artist in his own right, Faust is also the studio/special projects director for Nick Cave, where he both collaborates on exhibition design and produces Cave’s performance works. He currently serves on the Appleton Coated Design Council as well as the School of the Art Institute’s Fashion Committee and recently sat on the board of directors for both AIGA Chicago and Riverside Arts Center.

Together they have created Facility in Chicago. It’s a multi-disciplinary creative space for other artists, artisans, designers and architects. Additionally, Facility plays host to myriad pop-up special projects such as exhibitions, performances, and fresh retail experiences. It is a space imbued with the belief that art and design can create peace, build power, and change the world … that by fostering an environment and community built from your dreams you will wake up daily within your destiny. It reaches deep into our communities, employing the collective powers of art and design as a means to empowerment and social change.

The Madison Museum of Contemporary Art offers free daily admission. Its vision is to be an organization that fosters the exchange of ideas and creates experiences that will inspire a wide audience; be a nexus for the work of emerging and established regional, national, and international artists; serve as a catalyst for the continued development of a vigorous community of artists; and provide a forum that will encourage people to be challenged by, reflect on, and make connections between art and the world around them.

The Museum includes four galleries and The Shop, a space recently opened to provide interactive contemporary art experiences and educational workshops for the community.

The Museum’s Rooftop Sculpture Garden provides an urban oasis with an incredible view which serves as a lovely venue for weddings, art openings, dining, and cinema.

MMoCA’s galleries are open Fridays, Saturdays, and Sundays from noon to 6 pm. The Museum also has a slate of online events, including wellness activities, education workshops, and virtual tours. Please visit mmoca.org to learn more. 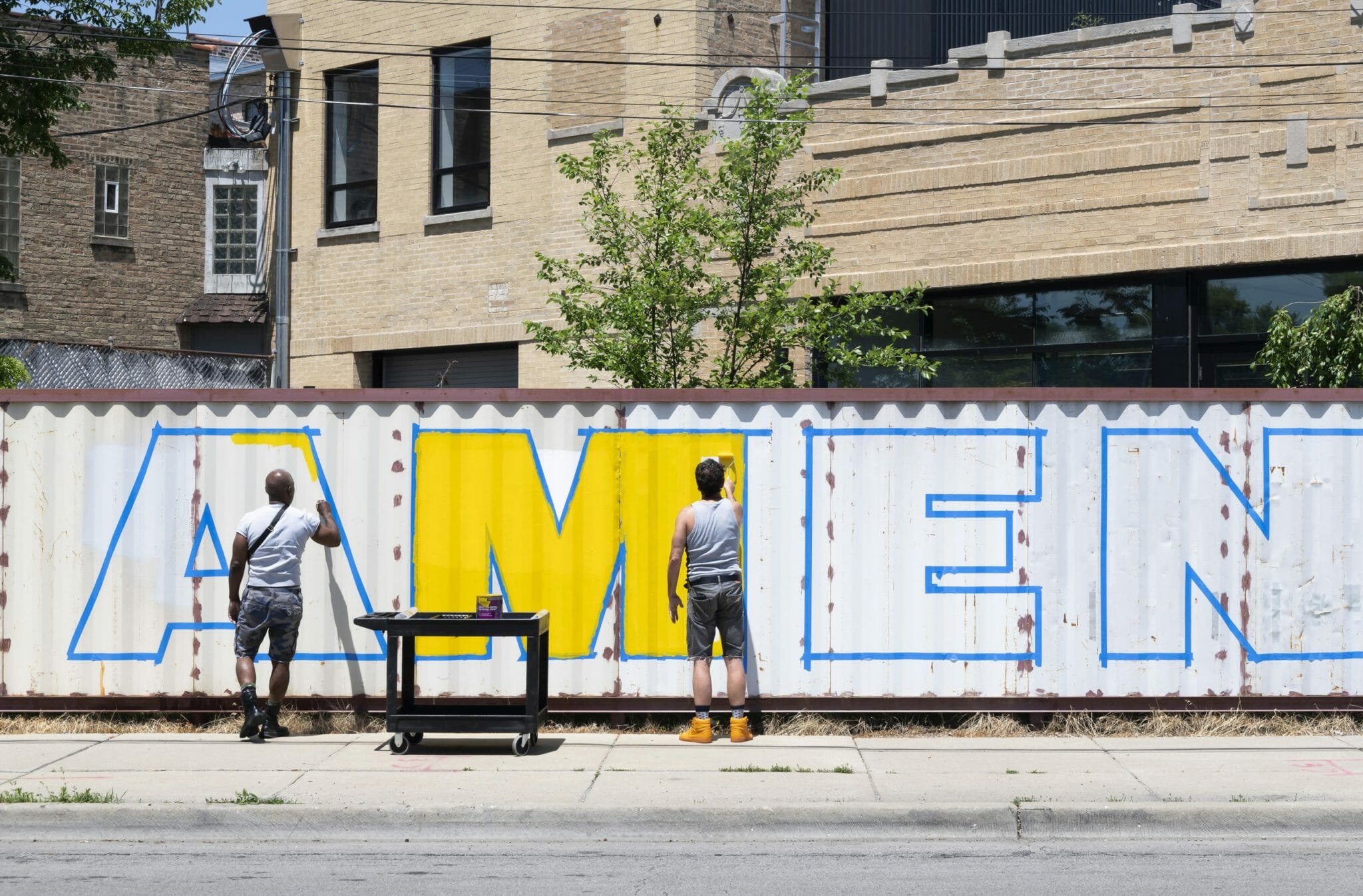 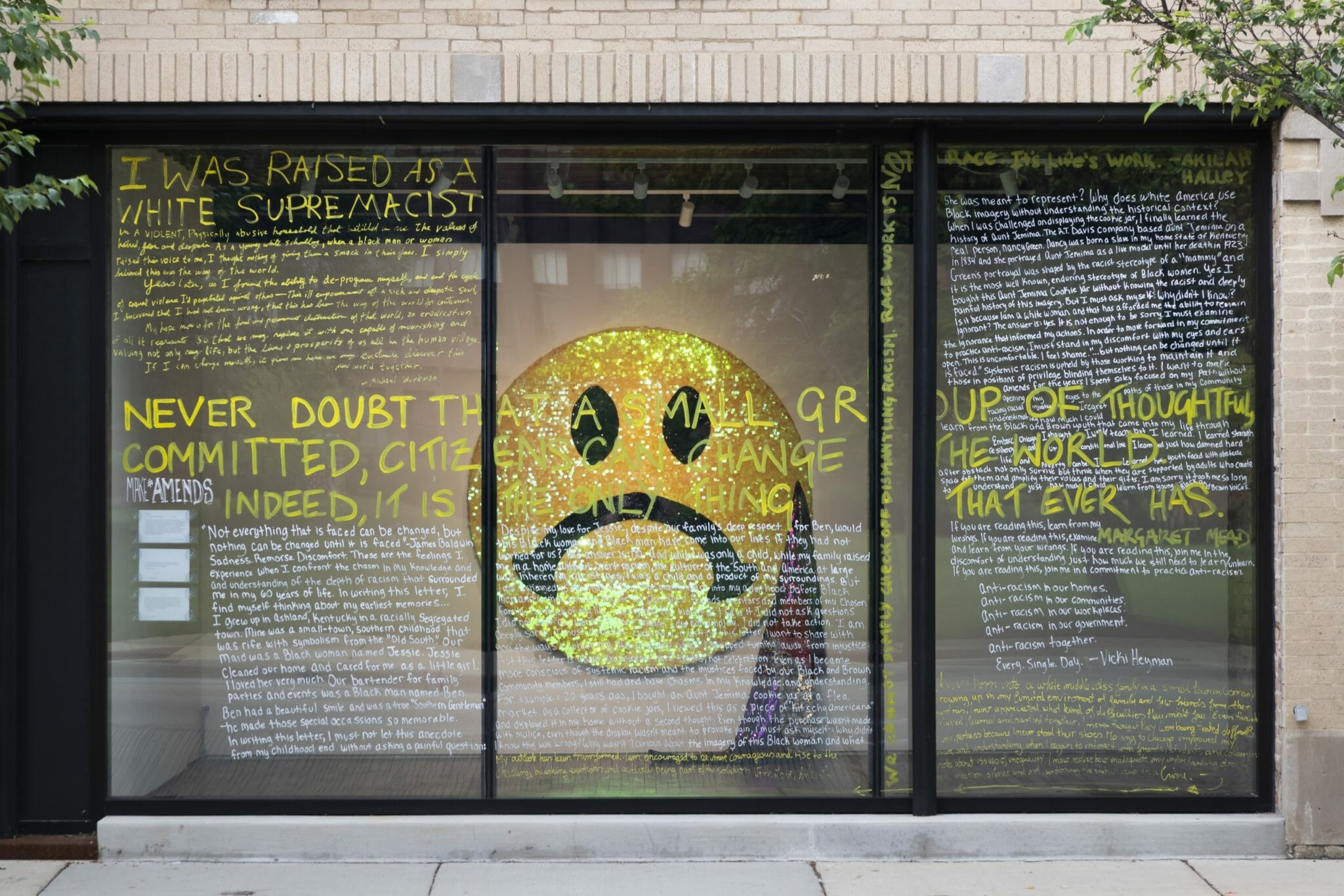 AMENDS. Nick Cave and Bob Faust, 2020. Phase I: Letters to the World Toward the Eradication of Racism. Photo by James Prinz, courtesy of Facility, Chicago. 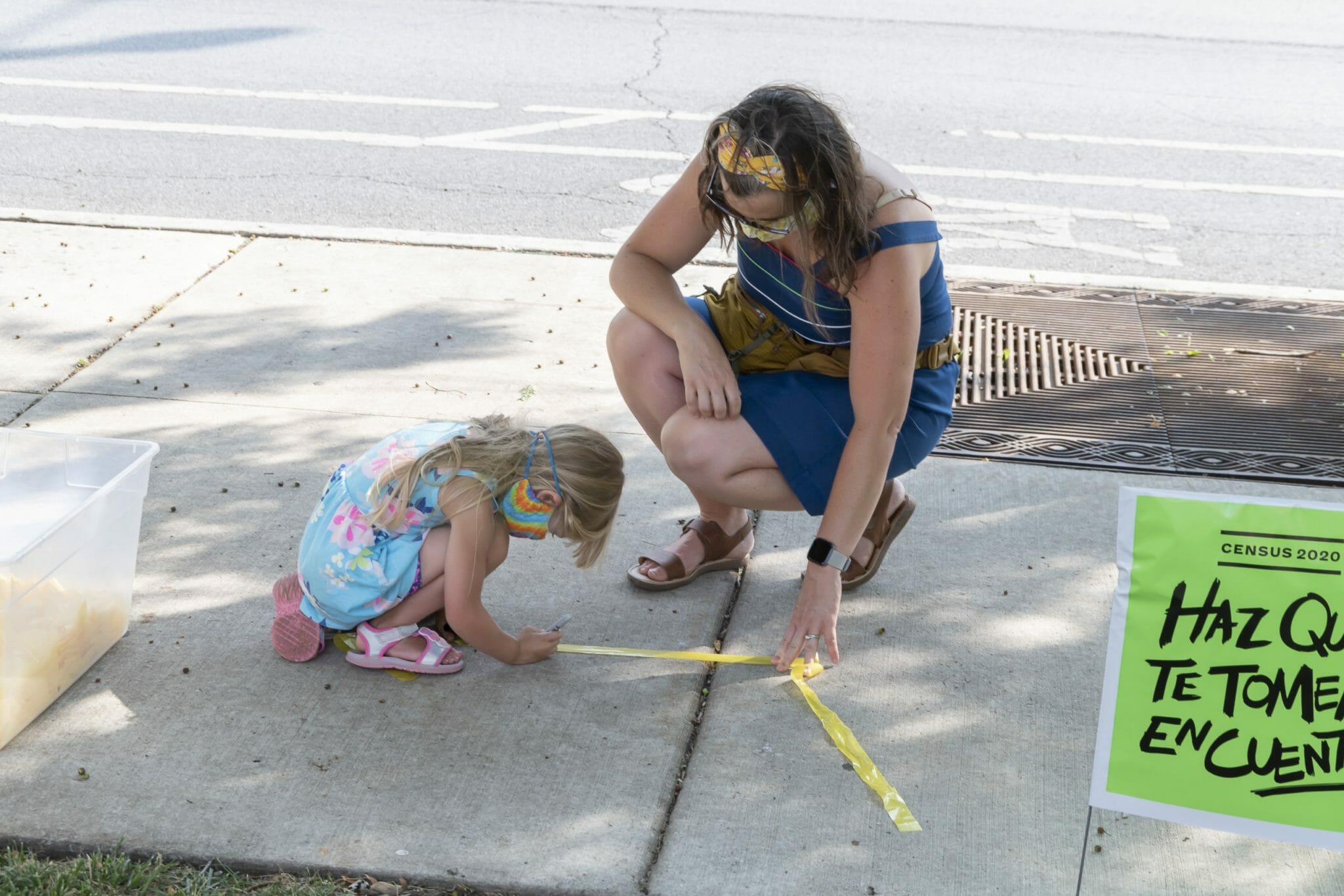 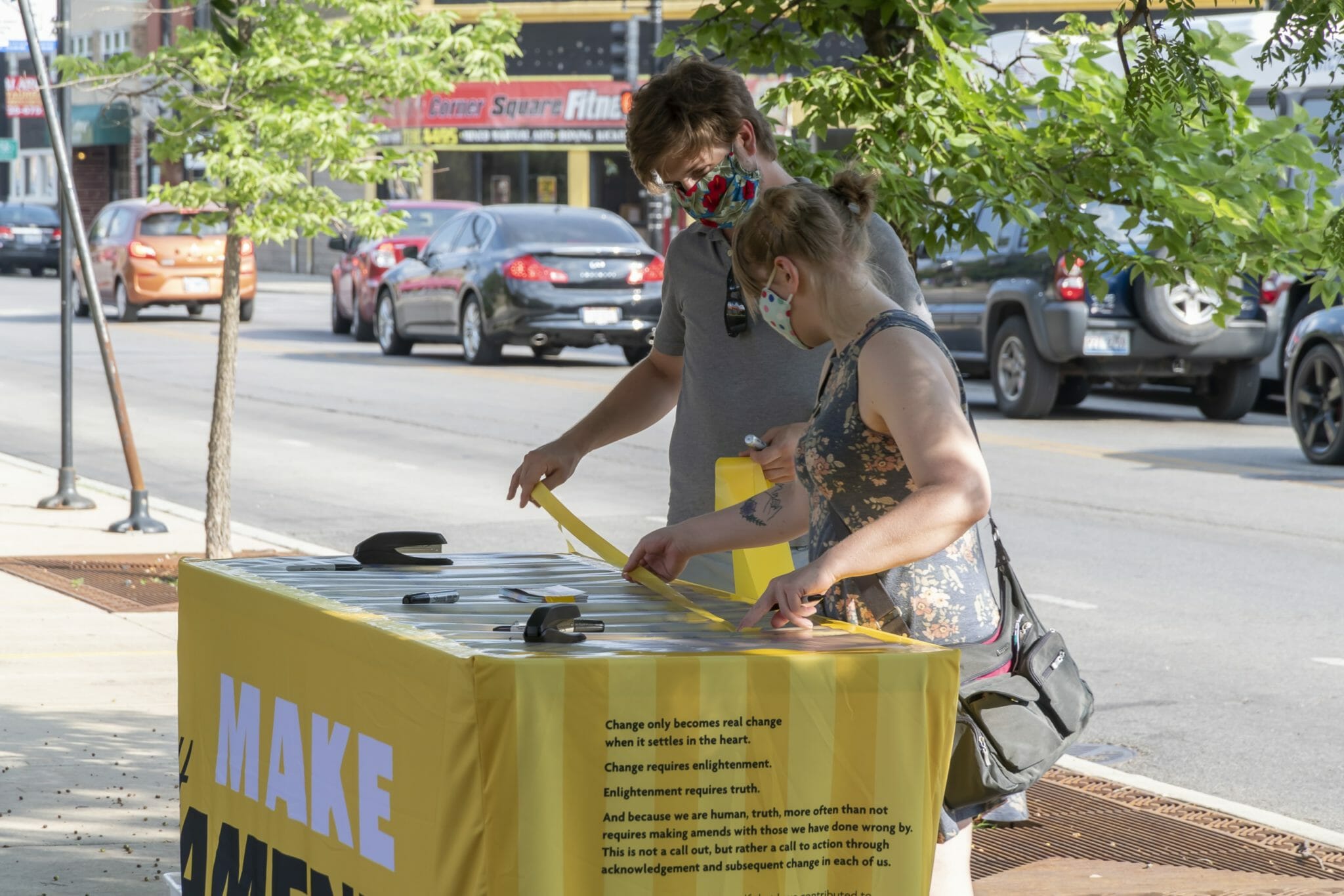