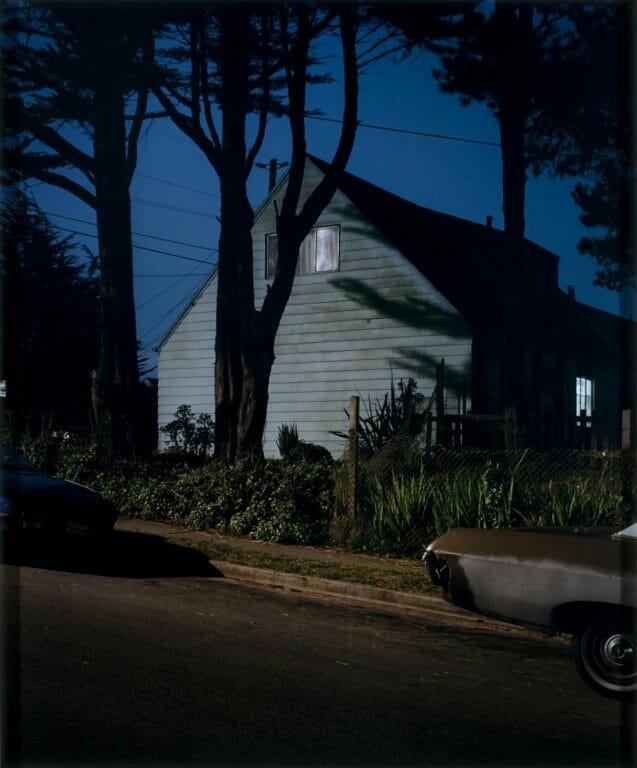 A single house under a darkened sky looks isolated and alone. Exterior light reflects off plastic insulation sheeting covering a second story window in an otherwise bare white wall; interior light from another window suggests that someone is inside, but no one is visible. Tall, established trees cast looming black shadows across the worn siding. Two cars are parked on the street, one a forty-five year old bronze relic with a rusted bumper. Spiky green plants along brown wood fencing with attached chicken wire define the yard and exclude intruders. Russet leaves are scattered along the edge of the sidewalk and the street. Telephone wires stretch from pole to pole and intersect against the night sky.

Despite its lonely appearance, this house is actually located on a corner in a typical American suburban neighborhood, one house in a group of houses that are connected by electric and telephone wires. The artist has made choices of subject and timing and framing that lend mystery to the scene and provoke questions: What is the time of day; is it twilight or dawn? Is the light on the outside coming from the setting or rising sun, or from a streetlight? Who lives here? What does the light inside mean? Why is no one outside? Do the cars belong to residents of the house? What is it like to live here? Do people who live here feel isolated from or connected to their neighbors? Why did the artist stop to photograph this particular house? Why did he crop the image to exclude parts of the house, the yard, and the cars? Is there anything ominous implied by the skewed light and thrusting shadows? What does this place represent to the artist?

Todd Hido photographs suburban homes in San Francisco and his native Ohio. Working at night, he creates moody, color saturated images using long exposures. He has said, “Although I take pictures all over the country, all the neighborhoods I head towards look similar and this is not a coincidence…All the things I photograph remind me of the home in Ohio I grew up in or the environment around there, the landscapes, houses, people…Most of my photographs of homes at night have a light on in the window. That is a very important part to me as it implies that someone is in there. I have often said; ‘The lights come on and the inside seeps to the outside.’ The light being on in the window makes the picture more about the people inside—and that is what attracted me to it in the first place. That there was someone there—and I was wondering about what his or her life is like…I believe that all those signs from your past and all those feelings and memories certainly come together, often subconsciously, and form some kind of a fragmented narrative. Often you’re telling your own story but you may not even know it… All of my photographs are made on analog film with long exposures and there is no lighting that I am adding to the scene. I do not collaborate or get permission from the owners to make the photographs. I just do it. Also, 99% of the time I am alone when shooting. Also, I find it much more interesting to simply discover my locations and shoot them then and there. I’m not the kind of photographer that goes out and creates something from an idea that I preconceived…at least not with landscapes or buildings. What I usually do is drive and drive, and I enjoy that such a lot.” When asked about the format of his photographs Hido has said, “I often use the vertical format. With the houses I do it quite a bit, and the reason for it is that often times I just wanted to get a single home in the frame. The place seems more isolated that way. Also it was easier to focus the viewer’s and my attention onto a single home. I also like that it shows lots of the sky and lots of foreground and that tends to flatten out the scene and utilize the negative space more.” [Quotations from Interview by Daniel Augschoell and Anya Jasbar for Ahorn Magazine.]

Todd Hido was born 1968 in Kent, Ohio. He has said that because of his love of skateboarding and BMX culture he “stumbled into photography in high school and once I’d found it I realized I had a real interest in it.” He attended the Rhode Island School of Design from 1991 to 1992 and holds a Master of Fine Arts degree from the California College of Arts and Crafts in Oakland. He is an ardent movie fan and his photographs are like parts of movie narratives. He lives and works in San Francisco.

Interview with Todd Hido: Finding Joy in the Process

Interview with Todd Hido on his Method

Museum of Modern Art, on photography