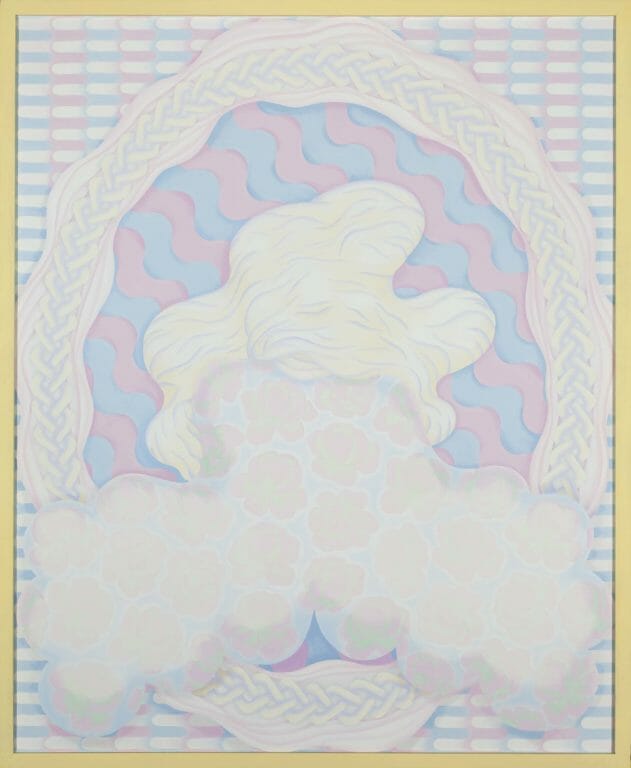 Sarah Canright’s painting Shadow can be read as three layers of precise patterning in ghostlike tones of blue, pink, purple, white, and green. The tightly composed background features interlocking geometric prongs that fit together like puzzle pieces, a chain-link fence, or woven textile. A braided oval resting on a river of folds disrupts the background and dominates the middle ground. The braid encloses the most saturated area of the painting, with thick pink and blue lines that ripple diagonally across the oval’s interior. Organic, cloudlike forms in the center of the oval interrupt Canright’s orderly geometry. Two amorphous-but-symmetrical shapes, painted with an understated flower pattern, extend down and outward, toward the viewer. Above them, the texture of a third area echoes the undulations within the braided oval.

Four years after graduating from the School of the Art Institute of Chicago (SAIC), Canright spent several months traveling in Europe and attended the 1968 Venice Biennale. The trip was influential: as she later observed, “…Everything I had seen [in Europe] had been a male projection onto the world, and…the way I was going to continue would be to continue as a woman.” She made Shadow one year later and the work demonstrates her turn to a softened palette and commitment to a specifically female perspective.

Shadow is abstract in that Canright does not depict an easily recognizable object or scene. Still, her careful attention to patterns that suggest rich, decorative textures found in domestic interiors may communicate an affection for such spaces. A feminist reading of Shadow, with its braided texture and waved interior, hint at stylings and modifications of women’s hair. The encircling plait could also act as a mirror, framing the cloudlike matter at its center.

Canright has commented that her work at this time was intended not to communicate a realistic landscape, but rather to convey the concept of “interiority.” The waved texture in the mirror’s “reflection” appears impenetrable, in contrast with the delicate, ethereal clouds. With this interpretation in mind, the clouds may function as a “shadow” image of the Self, surreally emerging from or dissolving into the mirror’s surface. The interaction of the two forms—the clouds and the waved patterning—may be read as a scene of self-fashioning: the process of constructing one’s identity and projected image according to a set of social standards. This reading of Shadow follows the interests of other female members of the Chicago Imagist cohort whose artwork incorporated images inspired by the norms of modern beauty culture. The precision of Canright’s imagery and her subtle color choices support the validity of a woman’s perspective in modern abstraction.

Sarah Canright came to Chicago in the early 1960s to study at the School of the Art Institute of Chicago (SAIC). She had been encouraged to apply by her mother and, although initially reluctant to attend, quickly became absorbed with her work. She completed her bachelor’s degree in 1964, with painting as her preferred medium.

In a video-recorded interview, Canright has reflected that SAIC was a unique environment for women in the 1960s (chicagoimagists.com). Separated from the art locus of New York City, Canright and her peers saw themselves as welcome members of a mutually supportive alliance with few stylistic constraints. The school’s faculty members exposed their students to Surrealism, Outsider Art, and Chicago’s prevailing tradition of figuration. Don Baum, eager to help SAIC students at the start of their careers, showed the work of recent graduates, male and female, with more or less equal representation at the Hyde Park Art Center (HPAC), where he served as director.

Canright’s work was shown in innovative exhibitions at the HPAC with Nonplussed Some (1968 and 1969), Marriage Chicago Style (1970), and Chicago Antigua (1971). Her choice of tone and imagery distinguishes her visual style from that of other Chicago Imagists. Canright has taught painting since the mid-1970s, and in the 1990s, she accepted a faculty position at the University of Texas in Austin, where she resides today.

Sarah Canright on Gender Equality Among the Imagists