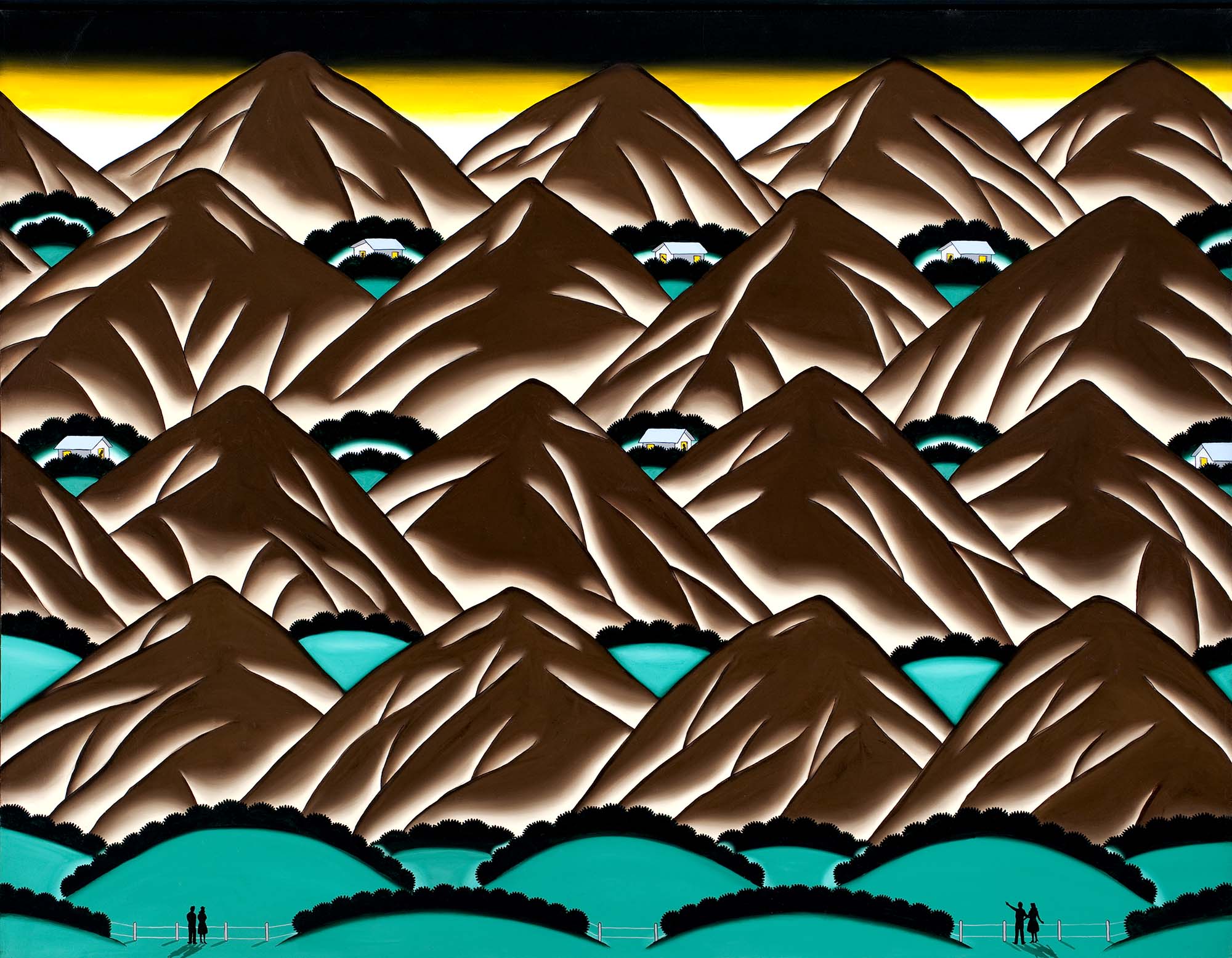 Two very different neighborhoods are depicted in Roger Brown’s oil paintings Sudden Avalanche and Mountain Sites, but in both scenes nature and humans are on a collision course. Silhouetted residents can be glimpsed through lighted windows, while outside in the natural world, people are having experiences that are key to unfolding stories. Both paintings are distinguished by balanced and flattened picture planes without diminishing sight lines, giving comparable emphasis to both background and foreground. Nature dominates each scene, but the effects of human intervention seem central to the tales.

In Sudden Avalanche, a mass of snow pummels a city, burying residents and creating panic, while people indoors appear oblivious. Beneath a black sky underlined with a yellow glow, cascading snowballs zigzag between shadowed snow banks like pinballs in an arcade machine. Tall buildings frame the view and green curtains at their entries suggest a theatrical performance in which even the snowballs convey concern about the mismatch of human activity with the forces of nature.

In Mountain Sites, the natural environment is being developed with housing and landscaping. Dwellings, curving hedges, artificial lighting, and candy-colored lawns have been inserted here and there among eighteen mountains. Residents have already moved into the isolated houses. The brown mountainsides have been cleared of vegetation, enabling erosion and gully formation. There are no meandering signs of natural growth, and there is an unsettling convergence of dusk and dawn as if development and devastation are happening at the same time. Two couples stand behind fences that distinguish their world from the scene before them. They may be contemplating the purchase of a mountain site, or they may be worried about the transformation of nature and the changing mountain “sights.”

Particularly inspired by travels across America, Roger Brown used his art to reflect on historical and current events. Mountain Sites and Sudden Avalanche echo American traditions of landscape painting in which the countryside was depicted with vast, unspoiled expanses. However, these two paintings call attention to modern developments leading to alteration or destruction.

Compelling lines and color reminiscent of comic book images characterize Roger Brown’s art. His stylized figures are based on photographs of his mother and father taken during the 1940s. Their repeated silhouettes lend a generic quality to the characters, while also evoking an impression of theater and drama.

Much of Roger Brown’s work draws from his memories of growing up in Alabama. As a child he took art classes and appreciated handmade folk objects that were characteristic of the American South. Despite his initial plans to become a preacher, he decided on an art career and moved to Chicago. He studied at the School of the Art Institute of Chicago, where he drew inspiration from early Italian Renaissance painting, Surrealism, and the art of Edward Hopper, Grant Wood, and Georgia O’Keeffe. Like his contemporaries at the school, he was influenced by the mentorship and art-collecting habits of artist and professor Ray Yoshida. He also worked at a decal company where he encountered a hard-edged, airbrushed style of commercial art. Brown participated in Hairy Who exhibitions and became associated with Chicago Imagism. Hallmarks of his art are flattened picture planes produced by parallel sight lines with no vanishing points, and figures that are lit from behind and theatrically staged. Throughout his career Brown wanted his works to have the approachability of folk art, while at the same time depicting the complexities of twentieth-century America.

School of the Art Institute of Chicago Study Collection

Videotaped Interview of Roger Brown on His Collection