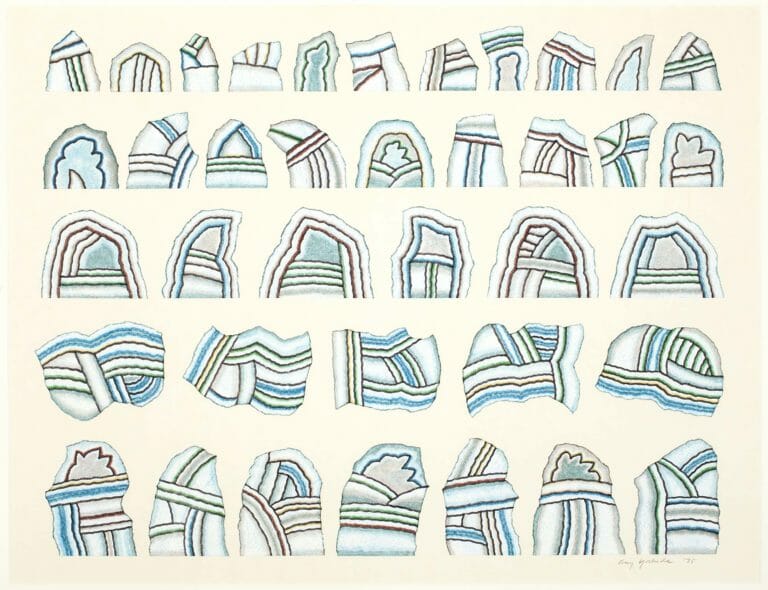 The torn paper fragments in this curious collage by Ray Yoshida appear to represent a collection of something. Thirty-eight irregularly shaped pieces of paper have been carefully arranged and pasted in five rows, loosely increasing in size and shifting form from tier to tier. On the surface of each scrap, quivering lines in felt-tip pen run parallel to one another and make abstract interior shapes where they converge, mimicking the rough contours of the paper. These wiggly stripes in red, yellow, green, blue, and black reveal the artist’s hand and imbue the small drawings with a sense of rhythm and movement. Pale hues in softly rendered crayon create illusionistic depth, with some forms taking on the appearance of miniature landscapes with vaguely terrestrial features. Upon closer examination, it looks as if a blue crayon was turned on its side and rolled across the paper before it was carefully ripped into smaller pieces using a controlled tear. The resulting texture adds an energetic buzz to the collection, as if these specimen teem with life.

The grid-like composition and formal unity of line, color, and shape among the pasted elements could be read as features of a typology. A typological image depicts a grouping of the same kind of object—usually in geometric array—and is used across disciplines to make inferences about an object’s function and meaning. The even spacing and linear baselines in Unreasonable Lineage reflect this structuring device, but exactly what we are looking at remains unclear. Without an environment or sense of scale, one could see mountains just as easily as geodes, assorted licorice bites, developing organisms, or a collection of teeth! Equally evocative and ambiguous is the work’s title, as it suggests both the absence of order (“unreasonable”) and sequential or evolutionary logic (“lineage”). Yoshida enjoyed this kind of wordplay, and would often come up with playful artwork titles that invite wonder and creative guesswork.

Ray Kakuo Yoshida was born in 1930 in Kapaa on the island of Kauai, Hawaii, to Japanese parents. He was drafted into the Korean War while attending the University of Hawaii. After his discharge, he earned a bachelor’s degree from the School of the Art Institute of Chicago (1953) and a master’s in fine arts at Syracuse University (1958). Yoshida joined the SAIC faculty in 1959, and taught there for nearly 40 years. During this time, he helped several generations of artists cultivate their own artistic identities; notably, many of the Chicago Imagists name Yoshida as an influential instructor, mentor, and friend.

Ray Yoshida is perhaps best known for his Comic Book Specimen series. While many of the Imagist artists found inspiration in comic books, Yoshida incorporated them directly into his collages. As his practice evolved, he developed a unique style of painting and drawing that was more abstractly influenced by comics and other commercial ephemera. These works focused on biomorphic and figurative forms in surreal and distorted environments characterized by muted earth tones and implied textures. Within the graduate painting studios at SAIC, a cross-pollination of imagery and ideas among Yoshida and his students further cultivated this experimental approach.

Over the course of his lifetime, Yoshida amassed an impressive collection of art and objects with diverse geographic, cultural, and stylistic origins. The collection included artworks by his students and by self-taught and folk artists, “trash treasures,” textiles, decorative arts, and ceremonial masks and figures. At home, he lived surrounded by these objects, and they heavily informed his art, research, and teaching.

Reflecting on Yoshida’s artistic versatility and influence as an instructor, Jim Nutt wrote, “He had a special knack for getting students to think about the possibilities of their work, encouraging them to experiment from within . . . . Ray was not doctrinaire. Rather he allowed all sorts of things to enter his mind and, as a result, he was constantly having discoveries . . . .”

Anchor Standard 1: Generate and conceptualize artistic ideas and work
Essential Question: How does knowing the contexts histories, and traditions of art forms help us create works of art and design?

Anchor Standard 7: Perceive and analyze artistic work
Essential Questions: How do life experiences influence the way you relate to art? How does learning about art impact how we perceive the world? What can we learn from our responses to art?

abstract the quality of not looking lifelike or realistic; in art, imagery that does not represent observed aspects of the world

collection a grouping of objects, often gathered for study, comparison, exhibition, or as a hobby

controlled tear the careful or intentional ripping of paper, cloth, or other material along a desired contour

evolution the gradual development of something, especially from a simple to a more complex form

lineage a sequence of species, each of which is considered to have evolved from its predecessor; lineal descent from an ancestor

linear arranged in or extending along a straight or nearly straight line; progressing from one stage to another in a single series of steps; sequential

sequence a continuous or connected series

typology study of, or analysis or classification based on types or categories, especially in archaeology, photography, psychology, or the social sciences

Digitized sketchbooks, notebooks, and papers by Yoshida from the Smithsonian archives

Hyperallergic article (2015) on the artist’s inventiveness and teaching

Hyperallergic article (2014) on Yoshida and his personal collection