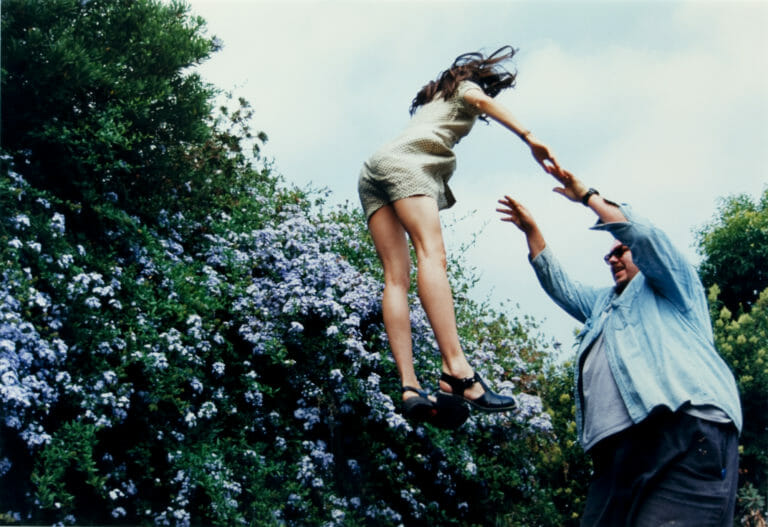 In each photograph in Tossing a Friend (Melinda) (1, 2, and 3), one sees a petite woman in a summer dress being thrown through the air by a large man. Upon closer inspection, we notice that each photograph has been taken from a different vantage point. The three photographs are hung vertically on the gallery wall, making the difference in camera angle and height of each toss more discernible. The man doing the throwing in these images is the artist, Martin Kersels. In each photograph, the expression on Kersels’ face is partially concealed. In the bottom photograph, Melinda’s face is directed toward the camera and her expression is captured. Both Melinda and Martin appear joyful as individuals engaged in the act of tossing and being tossed. The whole scene is made even more comical because the artist is wearing dark sunglasses amidst a background of flowering shrubbery, suggesting that it is a pleasant, sunny day.

Over the course of one year, Kersels made a series of photographs that he called Tossing Friends. Each set consists of three photographs of the same size, hung vertically on the wall, and featuring a different friend being tossed in a different surrounding. While looking at Tossing a Friend, (Melinda) (1, 2, and 3) you can see that Martin Kersels is much larger than his friend Melinda. In fact, Martin Kersels is much larger than most people. He was once described as a “man-mountain” by his friend and colleague Leslie Dick. As a man who stands 6’7” tall and weighs 300 pounds, Kersels draws attention to his body, its size, and the things he’s able to do with it. When asked about Tossing Friends, Kersels said: “People really liked these photos. I thought, ‘Well, would I like to keep it up and make more of these, tossing this and tossing that?’ Because of my size, I could just toss the world!” (Art in America, November 2006).

Physicality permeates Kersels’ work. He uses himself as a subject for expressing the emotions we share by virtue of being corporeal. One of these emotions is vulnerability, which Kersels exposes in photographic series that capture him tripping, falling, and riding a bicycle that is too small for his frame. As people, we share embarrassment at the thought of falling in public or in watching someone else trip. However, Kersels’ Tripping series shows us just the thing that embarrasses us. The artist photographed himself tripping on public sidewalks in populated areas and in broad daylight. Tripping highlights Kersels’ desire to connect to others by exposing himself in an embarrassing, although staged, moment. In the photographic series Falling, Kersels threw himself backwards into a snow bank, performing the same action over and over again. In the Whirling series, he whirled friends in circles, spinning them while holding them upside down around the ankles. His friends took pictures as they were spun, creating photographs that exemplified the action with blurs of color.

The words in the titles of these photographs, “whirling,” “tripping,” and “falling,” all describe movement. Many of Kersels’ artworks are “kinetic,” or related to motion. At the same time that Kersels was making photographs, he was making kinetic sculptures that included sound and moving parts. However, Kersels calls his movement works “animated” rather than kinetic because he wants them to seem more personal. Established themes of vulnerability, the body, humor, and playfulness create a thread of continuity among his photographic and sculptural works.

The history of art is very much a dialog among artists. Among other influences, Martin Kersels was clearly responding to the work of the artist Yves Klein when he made Tossing A Friend. In 1960, Klein photographed himself jumping off a two-story residential building and titled the work “Leap Into the Void.” Klein, a French artist who lived from 1928 to 1962, was a major figure in what became known as performance art. Performance art is a broad category, but frequently involves a time limited activity, theatrics, music, poetry or movement. Performance artists often photograph their work as a way to document the activity and create a permanent record of the action. The photograph makes an action accessible to a broader audience and serves as a tangible object that the artist may sell to make a living. In the act of photographing his actions, Martin Kersels is following in the footsteps of a long tradition of performance artists.

Martin Kersels was born in Los Angeles, California in 1960. He began his undergraduate degree in 1978 at the University of California, Los Angeles. After applying to film school and not being accepted, Kersels decided to pursue art history. Kersels then took studio art courses after he decided that art history was not for him; he thought he was a ‘horrible writer.’ He received his bachelors degree in art from UCLA in 1984. After he graduated, he became a member of a neo-dadaist performance art group called SHRIMPS.

Kersels described his performance work with SHRIMPS as movement-based, using very few words and a high level of slapstick comedy, based on the fallibility of the body. Others describe SHRIMPS as a group known for their bizarre costumes and lumbering movements. The women in SHRIMPS were small and muscular and the men were all 6’7” or taller. The first series of SHRIMPS performances were about redefining views of big men being unkind or threatening. The performer Weba Garretson, who later worked with SHRIMPS, described meeting the group by saying, “I was scared of them, even though they seemed like such nice people.” When funding for performance-based art work began to disappear in the late 1980s and early 1990s, Kersels decided to go back to school. In 1993, Kersels was accepted to graduate school at UCLA, where he concentrated on integrating his performance work with the human body with object making.

Kersels received his Master of Fine Arts degree from UCLA in 1995. When Kersels helped the artist Paul McCarthy videotape his performance work, it helped change Kersels’ perspective about making interdisciplinary art. Kersels served as co-director of California Institute of the Arts (CalArts) Program in Art from 1999 until moving to the Yale School of Art in 2012, where he became Associate Professor and Director of Graduate Studies in Sculpture. Kersels has exhibited his work in major exhibitions including the 1997 Whitney Biennial, as well as in many solo exhibitions.