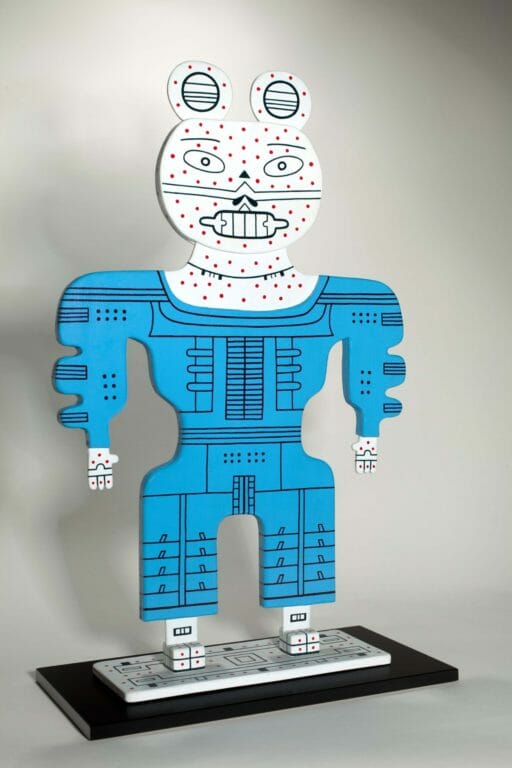 Measle Mouse Quarantined From His Fans

This little wood figure has red spots on his face, neck, hands, feet, and on his round mouse ears. Even though Measle Mouse is small―just two feet tall―he has powerful-looking shoulders and is wearing an impressive blue outfit as if suited up for a sport or a performance or an important task. His backside is similar: a reverse image of the mouse, but sporting a goggle design and the letter M on his head. Despite his superhero appearance, the mouse has apparently developed a case of the measles, a contagious disease that causes red, itchy spots all over the body. Before the advent of measles immunization, the illness commonly afflicted children and often temporarily doomed kids to quarantine, which meant they had to be kept at home and away from other children to stop it from spreading.

Measle Mouse Quarantined from His Fans is made from a flat plane of wood with minimal three-dimensional shaping. The totem-like sculpture is smoothly covered with blue and white acrylic paint that distinguishes his face and his geometrically decorated uniform. He stands on a flat wood platform painted with a pattern reminiscent of a circuit board. Measle Mouse’s pose seems strong and resolute, ready to tackle any challenge, including illness, and his face is bright-eyed and grinning a determined grin for his fans and supporters. The designs of his face and on the back of his head bear a strong resemblance to ceremonial masks made by indigenous peoples. The red measles spots contribute to the color scheme of red, white, and blue.

Karl Wirsum loves puns and word games. The name Measle Mouse might be a play on the word measly, which is often used to mean “little” or “too small, inadequate or insufficient.” Since Wirsum also loves music, particularly jazz, the title of the sculpture may refer to a line from a lively jazz song called Comes Love, made famous in the middle of the twentieth century by many different singers, including Billie Holliday, Ella Fitzgerald, Sam Cooke, and Joni Mitchell. The song starts, “Comes a rain storm, put rubbers on your feet, comes a snow storm, you can get a little heat, comes love, nothing can be done.” A subsequent verse about the overpowering feelings of falling in love goes, “Comes the measles, you can quarantine the room, comes a mousie, you can chase him with a broom, comes love, nothing can be done.” Measle Mouse looks ready to meet the test.

Karl Wirsum is inspired by artists who devote themselves to expressing ideas and passions through a variety of formats. He meticulously creates not only lively, colorful sculptures, but also eye-dazzling paintings and prints, marionettes, masks, paper cut-outs, and toys. Since his childhood he has loved comics and was influenced by the graphic stories his German immigrant father created for him while he was hospitalized for a month when almost five years old. He spent his recuperative period making drawings, and a doctor who noticed his skill suggested he take art classes during his elementary school years. In class he learned to draw figures by studying models. With the addition of a keen interest in the wacky humor of EC Comics and Mad Magazine during his high school years, he began to incorporate the strong color, defined line, active shapes, and fun of comics into his art. Later, when he was attending college at the School of the Art Institute of Chicago, he was intrigued by totems and masks made by Northwest Native Americans such as the Kakiutl peoples, and by South Sea islanders such as Papua New Guineans; many examples of these artifacts were exhibited at the nearby Field Museum of Natural History.

After college, Wirsum traveled to Mexico and was impressed with how everyday objects were incorporated into Day of the Dead celebrations. His own parents had died in a car accident when he was nine, and he was particularly drawn to the idea that lively, colorful artistry and symbols can integrate death and grieving into daily life. As Wirsum began exhibiting his paintings and sculptures, he was grouped with other young Chicago artists who had been his contemporaries at the School of the Art Institute and who shared his interests in quirky, stylized figuration created with scrupulous technique and outrageous humor. As one of the original exhibitors in the Hairy Who exhibitions of the late 1960s, Wirsum has continued to value the importance of humor in the serious, even spiritual, creation of art.

Chicago Reader 2017 interview with the artist

Hyperallergic 2015 interview with the artist