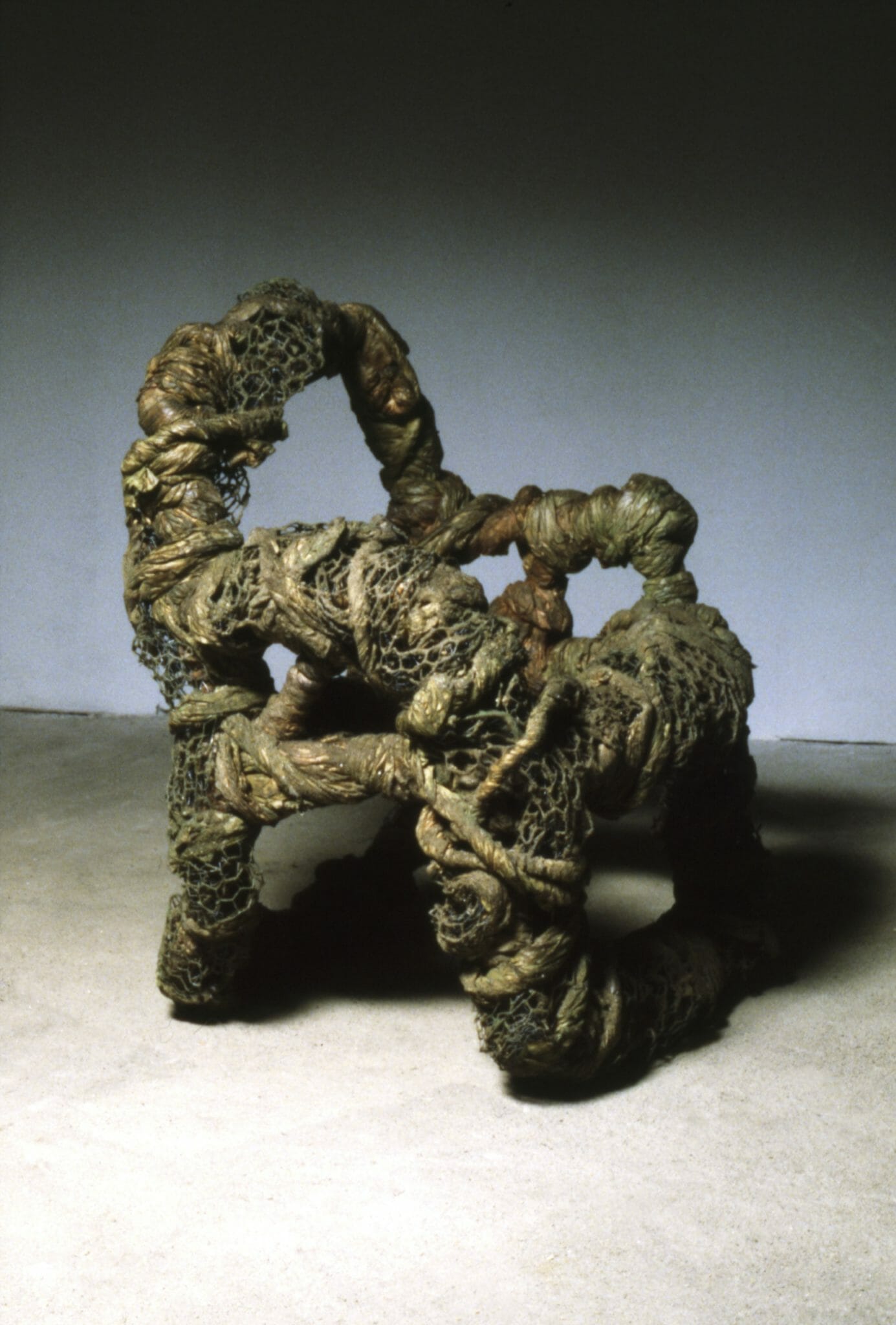 Only three feet tall, untitled, C.H.F. is a bulbous little chair whose underlying metal frame is wrapped with thick skeins of tightly knotted brown paper twisted around encircling segments of chicken wire. The ropy paper skeins twine along the chair skeleton with organic energy, like vines enveloping a tree trunk, highlighting and distorting the geometry of the angular lawn chair. They thicken and dominate one side and make the chair appear off-balance and unstable. Despite having swollen its thin contours, the wrappings seem to have shrunk the standard lawn chair volume to diminutive proportions. There are empty spaces where a chair back and seat should be, with no vinyl strappings or other supports. The lines and bulk make the little chair appear rigid as well as unsteady; hard and also soft; appealing and yet uncomfortable. Its paper and chicken wire “upholstery” is covered in grit, as if the chair had long ago been mummified and then recently unearthed.

Untitled, C.H.F. has a quirky, human presence that hints at a story, such as that of a vulnerable but enduring person who has been cast off from societal moorings. Jin Soo Kim has long been “an observer of Chicago alleys,” where she sees “traces of people in the scattered and forgotten objects I pick up in the margins of the city.” She found this lawn chair abandoned in an urban alley in perfect condition; it made her think of a frail person, perhaps one with a congestive heart condition, who might have rested in it but also might have had difficulty with its inherent unsteadiness. She took it to her studio, where she swathed and wrapped it with found materials to elicit this imagined personality. The lopsided coverings have both strengthened the chair and emphasized its irregularity and unreliability, making it appear much used and bent by the pressure of a body shifting its weight and pushing to stand. Dirt from sweepings in Kim’s studio and sand from Lake Michigan were layered onto the paper and chicken wire wrappings with fifty applications of clear acrylic sealer, resulting in a sculpture that was “born out of the studio.” The many coatings, like tree bark, evoke both growth and fossilization. Color was then applied with acrylic paint. Kim named the chair untitled, C.H.F. to signify all her musings on embodiment of congestive heart failure.

Jin Soo Kim was born in Seoul, Korea in 1950. When she was growing up, the country was struggling with the aftermath of the Korean War and the clash of values facing a traditional society as it became part of the global economy. Kim’s mother was a midwife, and Kim grew up assisting her mother and helping raise her brothers and sisters. She has said, “By the time I was thirteen I realized I didn’t want that life.” She chose instead to attend Seoul National University, graduating in 1973 with a nursing degree. The next year, she moved to Los Angeles. However, overwhelmed by the sprawl and isolation of the city, she moved to Illinois, first to Macomb and then to Chicago. In 1983 she received a Master of Fine Arts degree from the School of the Art Institute of Chicago. That same year she created her first installation in a Chicago gallery. During her studies, and for many years thereafter, she supported herself by working as a nurse. She is an adjunct professor of sculpture at the School of the Art Institute of Chicago.

If art sustained Kim’s soul, it was nursing that sustained her art, and her experiences as a nurse have influenced her artistic practice. As a girl she remembers accompanying her mother and hearing “the cries of laboring women, the tense stillness before the howl of a newborn baby, the joy of birth followed [by] her mother toiling endlessly over soiled sheets to make them clean again.” (Sculpture Inside Outside, catalogue essay using information gained in a conversation with the artist September 27, 1987.) As an art student in 1982 Kim remembers being in a studio where someone had left 2 x 4 wood beams and a roll of brown wrapping paper. She found herself slowly wrapping the boards in the paper. “Only later did she realize that this ritual of wrapping served to release the suppressed anxiety caused by one of her duties as a nurse: the wrapping of dead bodies in plastic before they leave the hospital….” (Sculpture Inside Outside) She eventually would use wrapping and bandaging in her art to signify healing and recovery, as hope for the future.

Kim began her career in art as a painter. At first, she used the detritus she found on Chicago streets as collage elements, adding a flattened tin can to a canvas for a bit of color and texture. Gradually her paintings became more three-dimensional, spreading over an entire wall and into the gallery space. She began to create gallery and museum installations that seemed to grow out of ceilings, walls, and floors. What appeared to be labyrinths of rampant organic growth turned out to be skeins of wire, rope, and cable lashed together with gauze and rusted fencing. Embedded in these tangles were old bed springs, broken and bandaged chairs, bicycles, bedspreads, fire hoses, and other abandoned items. She added individual sculptures constructed by wrapping some of these found objects with cloth and paper and placed them in her installations. Untitled, C.H.F. was created as an element of installations at the Krannert Art Museum in 1987 and the Walker Art Museum in 1988.

Kim chooses materials for her art because they evoke memories from her own life, reminding her of the unattainable bounty she saw in Sears catalogues when she was growing up in Korea. Assembling installations and constructing sculptures require long hours for the physical work of wrapping and tying materials. Kim enjoys the repetitive nature of these tasks, likening the rhythm of this work to that of chopping wood, kneading bread, or knitting yarn. She likes to think that viewers can look at her work and see how it was made and the time she has invested in making it.

The History of the Found Object in Art