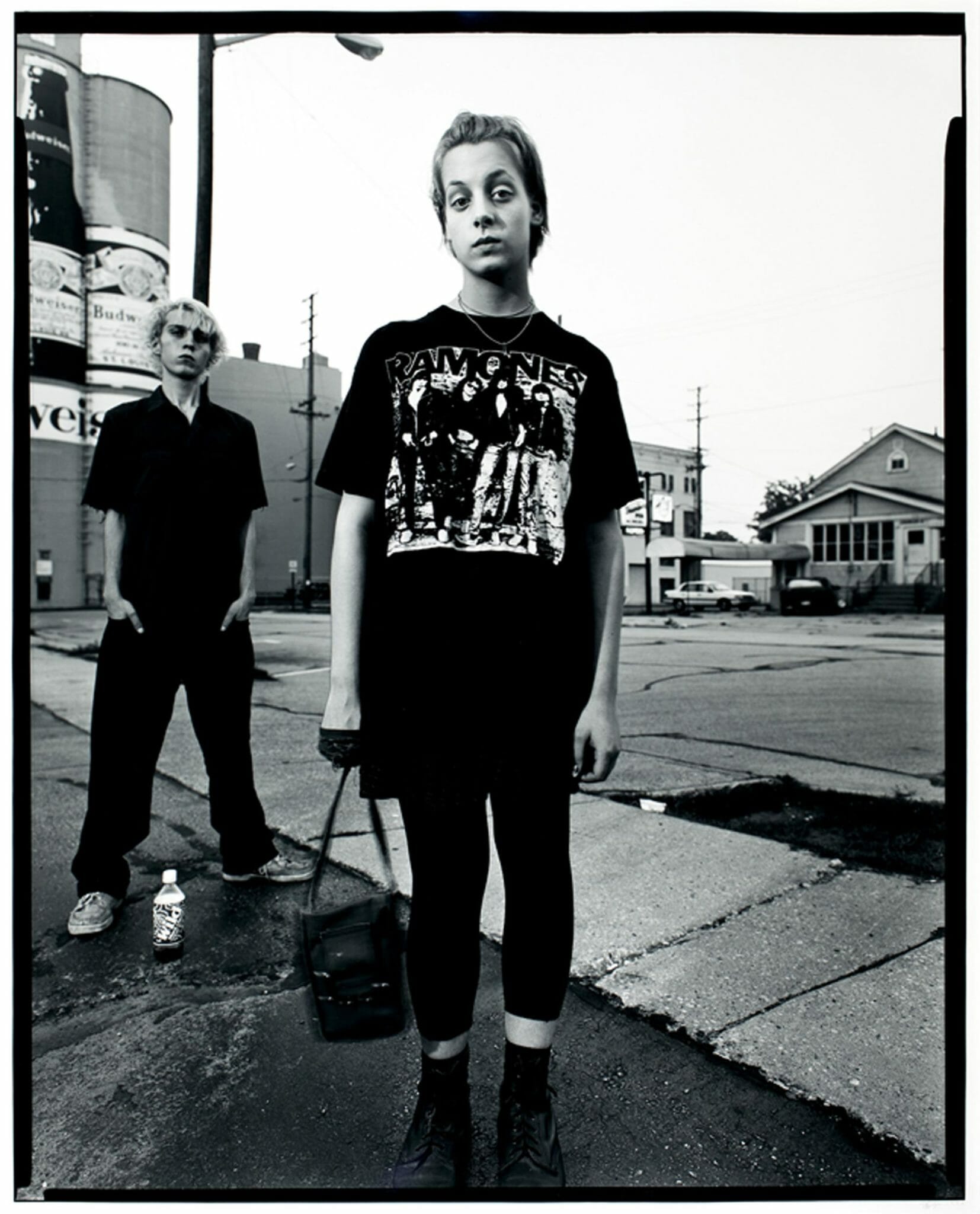 In John Shimon and Julie Lindemann’s black-and-white photograph, a young man and woman pose for a photograph captured using techniques from the past. The photograph’s straightforward title, Trish and Matt Downtown, Manitowoc, Wisconsin, offers a description of the subjects’ first names and the place where the artists took the photograph: Manitowoc, a city of 35,000 people located on the shores of Lake Michigan in northeastern Wisconsin.

Trish appears in the middle of the photograph looking down at the camera’s lens, while Matt stands, feet planted, a few feet behind her to the left near a deserted parking lot. Behind them, the Budweiser silos and a local pub comprise the background of the photograph. Trish’s purse gently swings while Matt’s black cherry soda rests on the ground in front of him.

The diagonal sidewalk interrupts the vertical lines of the photograph and is a clue to scale, by which one can evaluate the size of the individuals in their surroundings. Trish appears farther forward and more central than Matt. Like many features of the photograph, the lamppost, with its curved arm, seems to gesture to Trish as the focal point.

Trish’s impassive facial expression and body language convey meaning. Her direct stare and arched eyebrows suggest an internal confidence and self-possession. Like the Ramones, the band depicted on Trish’s shirt, she and Matt appear to be posing for an album cover, acknowledging the camera but not smiling for it. They both wear black clothing that contrasts with the white sky, a distinction further emphasized by a black border around the photograph that signals the antiquated photographic techniques employed by the artists.

Shimon and Lindemann collaborated with Trish and Matt as part of their “Midwestern Rebellion” series of photographs of rural and small-town Wisconsin. Shimon and Lindemann photographed their subjects—bikers, artists, musicians, and other individuals—in their workplaces or homes. They would often allow their subjects to choose where they would be photographed. Many chose to pose in their kitchens, outside their trailers, or in other places where they felt comfortable. The people who posed for the camera also chose the clothes they wore or the style of their hair. They constructed their appearance for the camera as an expression of self-identity. Although the resulting images seem informal, Shimon and Lindemann worked for hours with labor-intensive and antiquated camera techniques to produce portraits that seem both traditional and contemporary. Their cameras and photographic techniques may be more than a century old, but their approach to working with their subjects and other technical aspects such as lighting are of-the-moment.

Shimon and Lindemann draw inspiration from fine art photography to produce images, like Trish and Matt Downtown, Manitowoc, Wisconsin, that communicate the immediacy of common snapshots. While digital and analog cameras today can produce an image with relative ease, Shimon and Lindemann prefer the look of photographic techniques invented in the early years of the medium. Much of their work depends on chemical-based modes of producing an image, such as the processes used in the daguerreotype, as well as other antiquated techniques that digital printing has made nearly obsolete. While digital and film cameras can readily produce images rich with visual information, Shimon and Lindemann prefer the results of large-format cameras and the unpredictability of chemical-based developing processes for the emotional effects they can convey. These chemical processes create tonal contrasts that the artists further emphasize with lighting. For Trish and Matt Downtown, Manitowoc, Wisconsin the artists used a silver gelatin developing technique, first developed in 1871, that uses light-sensitive silver particles to register an image and that has become the standard in fine art black-and-white photography.

John Shimon and Julie Lindemann’s photography has deep roots in Wisconsin. Born near each other in the northeastern part of the state, the couple met at the University of Wisconsin-Madison where John studied art and Julie earned a degree in journalism. While in school, they formed a punk rock band called Hollywood Autopsy and performed on campus and around Madison in the early 1980s. They enjoyed the independence that came with living and working in a college town and eventually moved to New York City to pursue broader artistic freedom. They were particularly attracted to the city’s alternative art and music scenes. Realizing they should stick to what they knew best, they returned to the Midwest and found a version of the counterculture attitudes they had sought in New York. The images they took of the unique people who drew them back to Wisconsin comprise a photographic series called “Midwestern Rebellion.” The series’ subjects often appear in their own homes or in environments that they can call their own, such as their local hangouts and workplaces. Shimon and Lindemann meet many of the people they are interested in photographing at art openings or in their Manitowoc studio and exhibition space, the Neo-Post-Now Gallery.

While sharing a full-time position at Lawrence University teaching photography, Shimon and Lindemann pursue a collaborative photographic practice that includes self-portraits, an interactive postcard project, and short films. They have also worked with large-scale digital prints, always adhering to their distinct aesthetic. Their photographs are included in the permanent collections of the Art Institute of Chicago, Madison Museum of Contemporary Art, Milwaukee Art Museum, and the Wisconsin Historical Society, and were featured in the traveling exhibition, Only Skin Deep: Changing Visions of the American Self, organized by the International Center of Photography, New York.