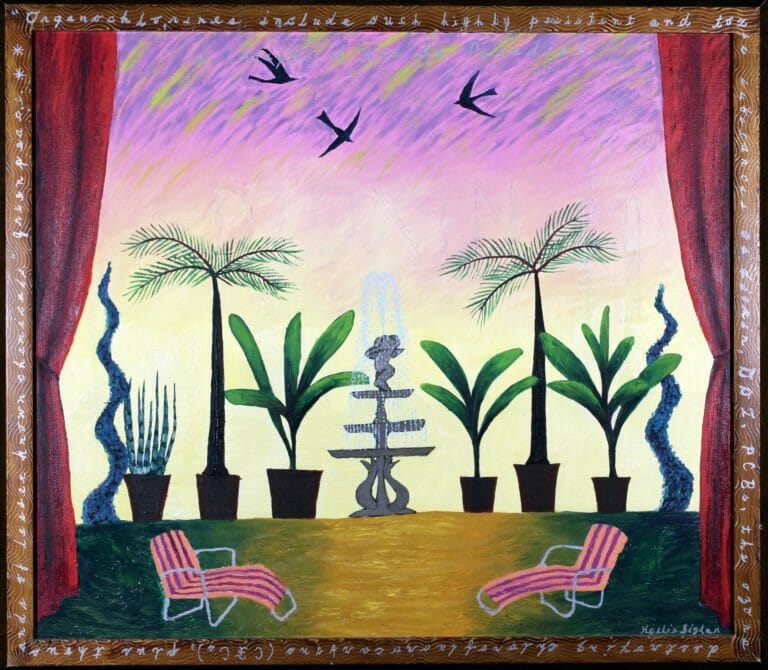 I Thought I Was In Paradise

At first glance this colorful scene appears idyllic. Lawn chairs with matching fuchsia and orange stripes recline near a path of light. The lemon sky is turning orange and pink, with streaks of purple and lime. A tiered fountain topped by a sculpted cherub shoots arcs of blue water; it is flanked on either side by eight orderly, balanced botanicals. Birds wheel in the darkening sky above the cool blue-green grass and plants. The lawn chairs are tilted invitingly, promising relaxation and conversation.

A closer look, however, reveals that much of this harmonious scene is illusion. Curtains are drawn to the sides, indicating that the scene is intentionally theatrical, a setting perhaps for a drama. The fountain and plants are lined up in a flattened row, in shallow space that looks like the back wall of stage scenery. No shadows are cast by plants and chairs onto what may be a grass-colored stage. The fountain appears to tilt slightly and the ground has begun to look as if it is rolling and unstable. Even the sherbet-colored sky seems exaggerated. Barely discernible words are written at the top of the painting—I Thought I Was in Paradise. What at first had seemed welcoming has begun to seem vaguely unsettling.

Emerging through the pastel-colored atmosphere are surface textures created by thick strokes of underpainting. Hiding in plain sight rectangular shapes that look like industrial buildings, webbed lines like the scaffolding of an oil derrick, and tall columns like smokestacks spewing lines of fume. In the midst of it all a huge word in capital letters, DIOXIN, materializes in the sky. Surrounding the scene, on the hand-painted frame decorated with a combed-wave pattern, is more writing. It quotes from a report issued by the environmental advocacy group Greenpeace: “Organochlorines include such highly persistent and toxic substances as dioxin, DDT, PCBs, the ozone destroying chlorofluorocarbons (CFCs), plus thousands of lesser known chemicals.”

What’s going on here? This apparently light, enjoyable drama has turned dark. The air is being invaded by the output of looming industrial forces. This space no longer seems safe.

I Thought I Was In Paradise refers to the effects of toxic chemicals in the air, the soil, and, as a result, in human bodies. In the decades following World War II, organochlorines were widely used in forms such as DDT in pesticides, polychlorinated biphenyls (PCBs) in electrical insulation, and chlorofluorocarbons (CFCs) in refrigerants for air conditioning, propellants for aerosol containers, and in grease-cutting solvents. Harmful derivatives of these compounds, including the dioxins that are by-products produced in the manufacture of these chemicals, persist in the environment, where they have traveled through food chains and have accumulated in animals and people. The health effects have been varied but include reproductive and developmental problems, damage to immune systems, and—especially important to Hollis Sigler—some cancers.

In I Thought I Was In Paradise, Hollis Sigler has used an engaging stage setting, vivid colors, and surreptitious references to industrial pollution and acid rain to dramatize the dangers to the natural environment and to human health of these toxins.

In an interview years later, Sigler remembers drawing for hours at her grandmother’s art table. There was no television in the house, but lots of paper and crayons, and she was free to do whatever she liked. It was that sense of unbounded creativity, she says, that she was trying to recapture as an adult. Her new paintings were done in a style that appeared untutored, with richly applied paint in short descriptive brush strokes. The subject matter reflected her life, her relationships, and her anxieties, without being specific. She wrote, “Although I wanted emotions in my art, I was determined to be silent about their cause…I wanted the viewers to have a dialogue with the art, to be able to put themselves in the picture…The works should touch us in our shared emotional space.”

In 1985, at the age of thirty-seven, Hollis Sigler was diagnosed with breast cancer. In 1991 the cancer reappeared and, despite further treatments, metastasized in her bones a year later. This time, instead of remaining silent about her ordeal, she began the work that would become Hollis Sigler’s Breast Cancer Journal.

The first paintings she made explored her reactions to what was happening in her body using the same expressive style and vocabulary of images she had developed since l976. But the meaning was now explicit. As in I Thought I Was In Paradise, she began to incorporate statistics, quotes from medical research, and notes from her written journal into the paintings and the frames. Although her cancer likely was a disease for which there was an inherited predisposition, Sigler used symbols of environmental pollution and its effects on plant and human life to explore both her feelings of foreboding and also the possibility of direct links between toxins and her disease. She became an outspoken advocate for women’s health, creating art that brought attention to a disease that had historically been hidden from public awareness. She struggled with breast cancer for sixteen years and died in 2001.

National Museum of Women in the Arts

Bunchman, Janis and Rohmer, Harriet. Heroes of the Environment.