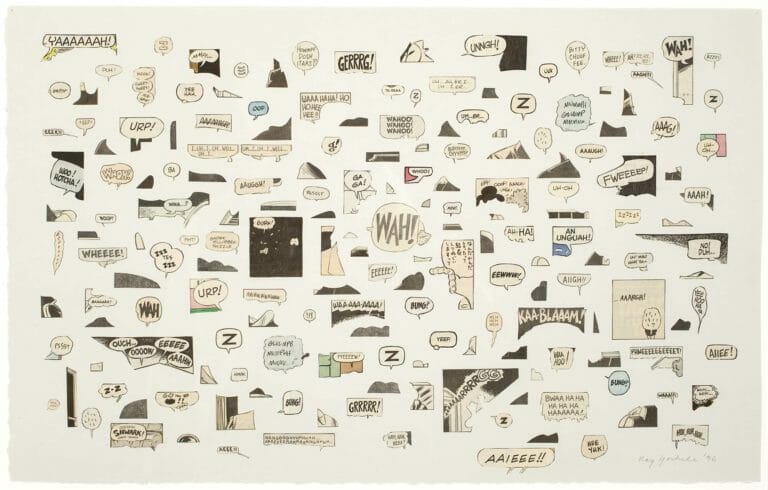 In this cut-paper collage by Ray Yoshida, over 180 individually excised pieces float against a flat pale-gray background. The pasted fragments appear to be evenly distributed across the large rectangular composition. Although the shapes are not aligned to a grid, the artist has achieved a sense of balance through careful consideration of positive and negative space. Rounded speech balloons and angular segments of exclamatory text—iconographic hallmarks of the comic book genre—enliven the array with their onomatopoeic lilt: Z / HEE YUK!  /  PSSST  /  WHEEEE!  /  WHA…?  /  AH-HA! These expressions suggest snoring, laughing, and whispering, as well as excitement, confusion, and discovery. Intermixed with these animated snippets of text are more abstract and indeterminable forms, such as tiny slivers of figures (a shoulder here, perhaps a head of hair there) and the cartooned interiors they inhabit (a window shown in perspective, the corner of what looks like a green armchair or couch).

Each small piece of paper has been cut with precision. Crisp edges retaining thin black outlines from the original comic provide visual clarity and contrast. Though most of the clippings are in black and white, there are muted bits of green, red, blue, pink, and yellow. The desaturated colors in these collaged elements reflect the commercially printed source material that Yoshida mined for images. Early mainstream comics and newspaper “funnies” were produced with handmade separations of cyan, magenta, yellow, and black (CMYK); the result was the classic 64-color palette characteristic of early mainstream comics. Towards the bottom right-hand corner, near the artist’s signature, a double-tailed speech balloon contains a string of vowels ubiquitous in American comics: AAIEEE!—used to express a cry of surprise or sudden fear and chosen by the artist as the title for this work.

In the late 1960s, Yoshida developed a distinct body of work he called the Comic Book Specimen series. The series comprised meticulously crafted cut-paper collages generated from the artist’s inventory of comic book and newspaper strip clippings. In these early works, Yoshida grouped and arranged select fragments into orderly rows, sorted by subject and form. Each collage presented a thematic index of a recurring graphic convention from the genre—one the artist knew intimately as both consumer and collector. In the 1990s—over twenty years later and following a prolific period of producing abstract paintings with similar pictorial references—Yoshida returned to collage. This time he rejected the regularity of the grid for more scattered arrays, as seen in the 1996 work AAIEEE!.

One quality that makes this work particularly dynamic is its emphasis on onomatopoeic language: words that phonetically represent the sounds they describe (e.g., KAA-BLAAAM! rendered in explosive lettering). Though comics are considered a visual medium, such “sound effects” are integral parts of the art form. The added dimension of implied sound helps bring the reader closer to the comic artist’s imagined world by clarifying events and dialogue from panel to panel, breathing life into the characters and their actions, words, and feelings. In AAIEEE!, this activation is further intensified through the dense concentration of exclamations and sound effects brought together by Yoshida in a single composition. Detached from narrative context, no longer beholden to the confines of a storyline, the imagined sounds resonate with new potential.

Ray Kakuo Yoshida was born in 1930 in Kapaa on the island of Kauai, Hawaii, to Japanese parents. He was drafted into the Korean War while attending the University of Hawaii. After his discharge, he earned a bachelor’s degree from the School of the Art Institute of Chicago (1953) and a master’s in fine arts at Syracuse University (1958). Yoshida joined the SAIC faculty in 1959, and taught there for nearly 40 years. During this time, he helped several generations of artists cultivate their own artistic identities; notably, many of the Chicago Imagists name Yoshida as an influential instructor, mentor, and friend.

Ray Yoshida is perhaps best known for his Comic Book Specimen series. While many of the Imagist artists found inspiration in comic books, Yoshida incorporated them directly into his collages. As his practice evolved, he developed a unique style of painting and drawing that was more abstractly influenced by comics and other commercial ephemera. These works focused on biomorphic and figurative forms in surreal and distorted environments characterized by muted earth tones and implied textures. Within the graduate painting studios at SAIC, a cross-pollination of imagery and ideas among Yoshida and his students further cultivated this experimental approach.

Over the course of his lifetime, Yoshida amassed an impressive collection of art and objects with diverse geographic, cultural, and stylistic origins. The collection included artworks by his students and by self-taught and folk artists, “trash treasures,” textiles, decorative arts, and ceremonial masks and figures. At home, he lived surrounded by these objects, and they heavily informed his art, research, and teaching.

Reflecting on Yoshida’s artistic versatility and influence as an instructor, Jim Nutt wrote, “He had a special knack for getting students to think about the possibilities of their work, encouraging them to experiment from within . . . . Ray was not doctrinaire. Rather he allowed all sorts of things to enter his mind and, as a result, he was constantly having discoveries . . . .”

Digitized sketchbooks, notebooks, and papers by Yoshida from the Smithsonian archives

Hyperallergic article (2015) on the artist’s inventiveness and teaching

Hyperallergic article (2014) on Yoshida and his personal collection