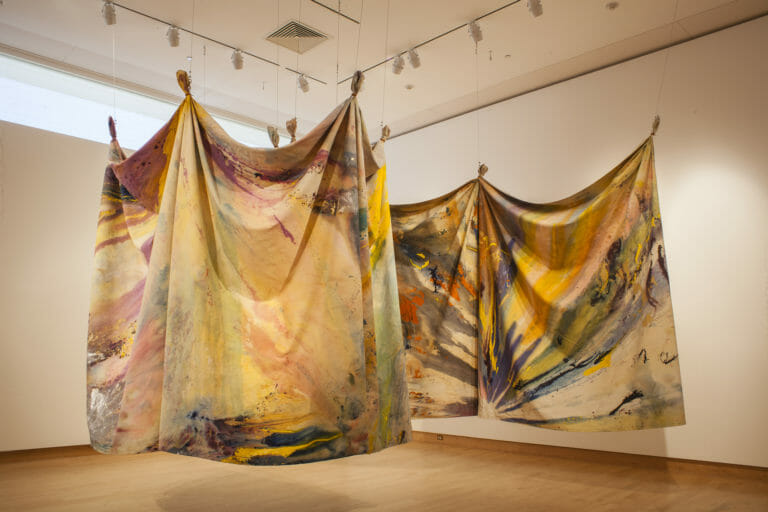 Carousel, a colorful, sixty-seven-foot-long, draped canvas, hangs suspended from the ceiling. Sam Gilliam was consulted about the arrangement of Carousel; however, he does not have strict rules for the way his draped paintings are to be installed. Instead, he prefers the work to be recomposed each time it is exhibited. For this installation, Carousel was tied with rope at eleven points along its length and hoisted into position so that, in the artist’s words, it formed “the shape of a comma.” As a result, Carousel seems to be simultaneously a painting and a sculpture. Its title alludes to a playful association: the swirling lights, forms, and colors of a carousel in motion.

Gilliam painted the canvas on both sides, using at least two techniques. He first poured paint directly on unprimed canvas, staining the surface with fluid color. Hues of blue and red bleed into one another to make tones of violet; bright yellows run alongside shades of blue. He then splashed opaque strokes of thick paint over top. A harmonious color palette unifies the entire composition, which is imbued with energy achieved through color, line, gesture, and form.

By 1970, the year he made Carousel, Gilliam had been pouring and manipulating paint on raw canvas for several years. He was inspired in part by the artist Morris Louis, who was among the first generation of color-field painters based in Washington D.C., where Gilliam lives. In color-field painting, paint was applied in large, often pure areas of flat color to emphasize its two-dimensional properties. Like Gilliam, many color-field painters abandoned the easel in favor of working on the floor and preferred unconventional ways to apply paint to canvas. Gilliam, for example, even used a rake and a hoe to achieve the painting effects he sought. He continued to expand and add to color-field processes in his own body of work as he sought to unify color and canvas as one.

Gilliam is credited with advancing color-field painting as a result of his innovations, creativity, and constant experimentation. He has draped, folded, suspended, wrapped, and cut-and-pasted his paintings, and may also include sculptural relief on their surfaces or establish “sculptural relationships” between a separate three-dimensional form joined in some manner to a two-dimensional painting. He said, “when I did the drape paintings, I wasn’t making sculpture, I was reacting against painting.”

In addition to adapting aspects of color-field painting to his work, Gilliam also incorporated the expressive marks, visual rhythm, and dramatic color associated with abstract expressionism. He was also greatly influenced by John Coltrane, an American jazz saxophonist and composer. Among other things, Coltrane is celebrated for masterful improvisation and known to be intensely devoted to practicing his instruments. Like Coltrane, Gilliam spent a great deal of time practicing his techniques and conceptualizing his compositions prior to engaging in improvisation. Gilliam simply states, “One has to spend time practicing.”

After teaching in Louisville for four years, Gilliam moved to Washington D.C. because his wife was offered a position at The Washington Post. In 1967, Gilliam received the first of two individual artist’s grants from the National Endowment for the Arts. The NEA grant helped him to focus on making art full-time. In 1968, he received a grant from the Washington Gallery of Modern Art, which provided him a rent-free studio and financial support for five years. The guarantee of a base level of income and a studio enabled him to work on a larger scale.

Gilliam experimented further with these larger canvases, culminating in his first draped painting in 1969. He was prolific in his production and successful early in his career. Between 1965 and 1973, he had seven, one-person exhibitions. He later received a Guggenheim Fellowship and a second individual artist’s grant from the National Endowment for the Arts. He has taught at the Corcoran School of Art, the Maryland Institute College of Art, and Carnegie Mellon University, and in the Washington, D.C. public school system.

Gilliam has been described as protean, and constantly in search of new visual and emotional vocabulary. In speaking about his process and his constant exploratory quest, Gilliam said, “One of our shortcomings here on earth is to define everything in terms of us, as opposed to pushing outwardly…and I have been criticized so much for not being a painter that defines humans.”